Why Do Some Dogs Get Cancer More Than Others? 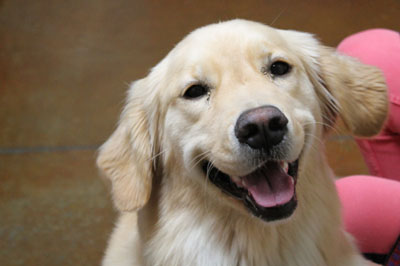 About half of humans over the age of 70 and dogs over age 10 are diagnosed with cancer. In terms of mortality, cancer accounts for about 23 percent of human deaths, and from 10 to 60 percent of dog deaths, depending on breed.

The smaller the dog, the lower the risk of cancer. In fact, the rate of cancer in small dogs like the Chihuahua and Maltese is less than 10 percent. Scientists believe a hormone that influences bone and tissue growth (IGF-1), which exists at lower levels in small breeds, may be a factor.

One of the breeds at highest risk for developing cancer is the hugely popular Golden Retriever.

Cancer in Goldens Began to Spike in the 1990s

About 60 percent of all Golden Retrievers will die from cancer – 57 percent of females and 66 percent of males. The two most common types of cancer in this breed are hemangiosarcoma and lymphoma.

Surprisingly, the high rate of cancer in Goldens is a fairly recent development. In a 1988 University of Pennsylvania School of Veterinary Medicine study, Goldens weren’t mentioned as having a higher rate of cancer than other breeds.

However, just 11 years later in 1999, over 60 percent of these wonderful dogs living in the U.S. were being lost to cancer.

When researchers compare the DNA of Golden Retrievers with hemangiosarcoma and other breeds with the disease, the genetic abnormalities are different. Interestingly, European-bred Golden Retrievers develop cancer at a much lower rate (under 40 percent) than U.S. Goldens.

Their genes are significantly different, which suggests the risk of cancer in American Goldens is the result, in part, of a fairly recent gene mutation. Researchers studying cancer in the breed have identified genetic alterations common to Goldens with hemangiosarcoma and lymphoma.

“Goldens in Europe and the U.S. may look similar, but there are enough DNA differences to separate the dogs into two distinct populations corresponding to their geographic regions. Gene pools on both continents are large, so breeding between the two populations is rare.

“When studied in the lab, genomic differences suggest that risk for some types of cancer is related to recent genetic mutations in North American Golden Retrievers.

“And this could be good news: genetic differences between European and North American Golden Retrievers may be key to understanding the etiology of canine cancer overall.”

The American Kennel Club (AKC) and other kennel clubs require that registered dogs be the product of other registered dogs. This standard is in place to insure no new genes are introduced into a breed, however, it also insures that every registered dog is a relative of other dogs of that breed.

This creates an isolated, closed population of dogs within each breed, which keeps the gene pool small. In addition, there is something called the “popular sire” effect, wherein certain dogs are bred over and over again.

Their descendants carry the same specific gene mutations, for better or worse, and those mutations ultimately become permanent. The result is that in some breeds, the genes that increase the risk of cancer are reproduced in generation after generation of dogs.

In 2012, the Morris Animal Foundation (MAF) launched the Golden Retriever Lifetime Study, describing it as “the largest observational study undertaken in veterinary medicine in the United States.”

An observational study monitors participants and collects information on them. The study isn’t intended to directly affect how owners take care of their dogs, but instead to provide valuable information on how to better prevent, detect and treat cancer and other diseases.

Between the study’s launch in 2012 and 2015, MAF signed up 3,000 privately owned Golden Retrievers who were from 6 months to 2 years old and healthy at the time of enrollment.

Goldens were chosen for the study because while they don’t have the highest risk for cancer among all dog breeds, there are more of them. Large sample sizes result in more accurate data.

In addition, Goldens are highly adaptable to a variety of lifestyles. They are family pets, show dogs, hunting dogs, canine athletes, competitors in a wide range of canine events, assistance and therapy dogs, and search-and rescue dogs. As a result, the breed is exposed to an extensive range of environments.

The study will run for 10 to 14 years, and will track the dogs throughout their lives with input from owners and veterinarians who have agreed to keep records of the dogs’ health, nutritional, and environmental information. According to Brackman:

“Based on observations summarized in questionnaires, researchers hope to identify potentially modifiable risk factors that may account for the high incidence of cancer and other diseases in Golden Retrievers and, eventually, in all dogs.”

MAF researchers are looking specifically for information about cancers that can’t be treated surgically, including inoperable mast cell tumors, lymphoma, osteosarcoma, and hemangiosarcoma. These four diseases account for the vast majority of cancer deaths in Goldens.

Over 2,000 Veterinarians Have Committed to the Project

Over 2,000 veterinarians are involved in the project and have agreed to perform annual physical exams on their patients (enrolled Goldens), during which they collect blood, urine, feces, hair and toenail samples and send them off for analysis.

They also report on any visits outside the annual exams, collect tumor tissue samples when necessary, and provide guidance to the dogs’ owners about necropsy (an animal autopsy) when a dog dies. According to a participating veterinarian interviewed by Brackman:

“The information we’ll gather looks at areas of potential exposure by air, contact and feeding. Owners are expected to provide information as detailed as chemicals used in the home, yard and on the dog, and drinking water sources, to name just a few.

The questionnaires are evaluated quarterly, and validated trends are published as they emerge. This provides real-time information to dog owners and veterinarians that may help influence the care of the dogs.

Building a Canine Health Database for the Future

“As the years progress, we are gathering millions of data points that will lead us to a better understanding of how genetics, lifestyle and environment impact our study dogs’ health and well-being. “We look forward to sharing the results from this study as our database grows and we are able to draw insight from what we are learning.”

It’s difficult to grasp the enormous complexity and potential of the Golden Retriever Lifetime Study, but given the number of lifestyle and genetic factors under investigation, I’m very hopeful the results will help us understand how to better care for not only Goldens, but all dogs.

Don’t allow your dog to become overweight. Studies show that restricting the amount of calories an animal eats prevents and/or delays the progression of tumor development across species, including canines.

Fewer calories cause the cells of the body to block tumor growth, whereas too many calories can lead to obesity, and obesity is closely linked to increased cancer risk in humans. There is a connection between too much glucose, increased insulin sensitivity, inflammation, and oxidative stress – all factors in obesity – and cancer.

It’s important to remember that fat doesn’t just sit on your pet’s body harmlessly. It produces inflammation that can promote tumor development.

Feed an anti-inflammatory diet. Anything that creates or promotes inflammation in the body increases the risk for cancer. Current research suggests cancer is actually a chronic inflammatory disease, fueled by carbohydrates. The inflammatory process creates an environment in which abnormal cells proliferate.

Cancer cells require the glucose in carbohydrates to grow and multiply, so you want to eliminate that cancer energy source. Carbs to remove from your pet’s diet include processed grains, fruits with fructose, and starchy vegetables like potatoes. Keep in mind that all dry pet food contains some form of starch. It may be grain-free, but it can’t be starch-free because it’s not possible to manufacture kibble without using some type of starch.

Cancer cells generally can’t use dietary fats for energy, so high amounts of good quality fats are nutritionally beneficial for dogs fighting cancer, along with a reduced amount of protein and no carbs. I recently learned that dogs fighting cancer can do a better job addressing this sugar-crazed disease if their protein intake is limited for 120 days, more on that later!

A healthy diet for your pet – one that is anti-inflammatory and anti-cancer – consists of real, whole foods, preferably raw. It should include high-quality protein, including muscle meat, organs and bone. It should also include high amounts of animal fat, high levels of EPA and DHA (omega-3 fatty acids), and a few fresh cut, low glycemic veggies..

This species-appropriate diet is high in moisture content and contains no grains or starches. I also recommend making sure the diet is balanced following the ancestral diet recommendations, which have much more rigorous standards (higher amounts of minerals and vitamins) than our current dietary recommendations for pets (AAFCO).

Because we live in a toxic world and avoiding all chemical exposure is nearly impossible, I also suggest offering a periodic detoxification protocol to your pet.

Allow your dog to remain intact (not neutered or spayed), at least until the age of 18 months to two years. Studies have linked spaying and neutering to increasing cancer rates in dogs. Even better, investigate alternative ways to sterilize your pet without upsetting his or her important hormone balance.

Refuse unnecessary vaccinations. Vaccine protocols should be tailored to minimize risk and maximize protection, taking into account the breed, background, nutritional status and overall vitality of the dog.

The protocol I follow with healthy puppies is to provide a single parvo and distemper vaccine at or before 12 weeks, and a second set after 14 weeks. I then titer (ask your vet to run titers at a lab that uses the IFA method) two weeks after the last set and if the dog has been successfully immunized, he is protected for life.

I do not use or recommend combination vaccines (five to seven viruses in one injection), which is the standard yearly booster at many veterinary practices. In my experience, this practice is completely unnecessary and immunologically risky.

This pet-friendly article was brought to you by Dr. Karen Becker,
Mercola Healthy Pets resident proactive and
integrative wellness veterinarian. For more pet care tips
and to stay up to date with her latest recommendations,
visit HealthyPets.Mercola.com where you can also get your
FREE Homemade Treats for Healthy Pets E-book today!