Everything You Need to Know About Mast Cell Cancer in Dogs 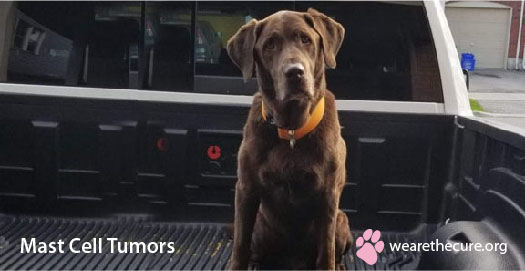 Description– Mast cell cancer in dogs occurs from Mast cell tumors (MCTs) or mastocytomas, which are the most common cutaneous tumor found in dogs and they account for 16-21% of all cutaneous tumors.

Older dogs of mixed breeds have a high propensity for the disease. It has been reported in breeds like Boxers, Boston Terriers, Labrador Retrievers, Beagles, and Schnauzers. Boxers, however, have the highest incidence. But mast cell cancer in dogs develops in histologically low or intermediate grade forms. No gender predilection has been reported.

What Are Mast Cell Tumors Anyway?

Mast cells are cells that occur in the skin and other tissues, like the intestines and respiratory tract. They are also an integral part of the immune system. They consist of large amounts of histamine, heparin, and proteolytic enzymes (enzymes that break down protein). These have a toxic effect on foreign invaders, like parasites, and are released when the mast cell is triggered by the immune system. A mast cell tumor results from these mast cells.

When histamine, heparin, and enzymes are damaged by some external invasion, they pose health hazards. Large amounts of these substances are released into the body that usually has adverse effects on heart rate, blood pressure, and other body functions. Sites, where the tumors are removed, can sometimes refuse to heal and can become unmanageable. Normal mast cells are found in plenty in the lung and gastrointestinal tract. But tumors generally don’t originate in these sites, they develop in the dermis and subcutaneous tissues and are most frequently found on trunks. The limbs account for generally ¼ of the sites of these lesions. Mast cell tumors have been reported to develop infrequently in other sites like the head, neck, conjunctiva, salivary gland, nasopharynx, larynx, oral cavity, gastrointestinal tract, ureter, and spine.

How to Classify Mast Cell Tumors

Mast cell tumors have been classified according to their degree of proliferativeness. The higher the grade, the more aggressive the tumor. 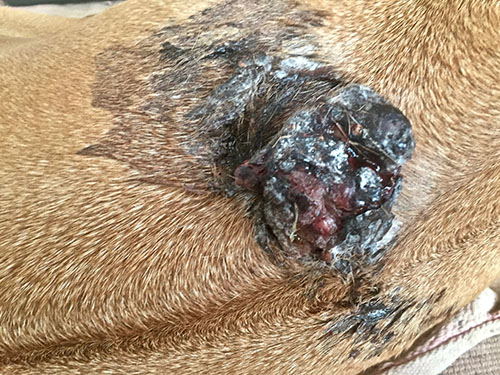 What are the Stages of Mast Cell Tumors?

Mast cell tumors should be staged because it gives us an idea about how they have metastasized in the body. A tumor is staged after it is surgically excised and examined, along with the surrounding lymph nodes. The factors on which staging depends include the number of tumors present and lymph node involvement.

What are the Causes of Mast Cell Tumors?

Like most cancers, the etiology of mast cell tumors is also not known. On rare occasions, they have been associated with chronic inflammation or the application of skin irritants. Studies have indicated that chromosomal fragile site expression (unstable genomic loci susceptible to breakage, rearrangement), a phenomenon that is thought to genetically predispose humans to the development of certain tumors, has been found to be increased in Boxer dogs with MCTs. However, this study was conducted on young, non-tumor-bearing boxers. So it was believed that the increased expression was likely due to the age difference.

The genetic alterations that increase the likelihood of tumors in humans are not absolutely understood in dogs. Changes in the pathway of p53 tumor suppressor have been indicated in some canines Disturbances in the expression of proteins like p21 and p27, cyclin-dependent kinase (A protein kinase inhibitor is a type of enzyme inhibitor that specifically blocks the action of one or more protein kinases) inhibitors that regulate the cell cycle, have been identified in several dogs. Recently an expression of c-Kit, a tyrosine kinase receptor for the growth of hematopoietic stem cells (multipotent stem cells that give rise to all types of blood cells) has been identified in canine MCTs.

Several studies have also suggested the presence of mutations in the juxtamembrane (adjacent to a membrane on one side of it) region of c-Kit leading to constitutive activation (synthesis of a protein or an enzyme at a constant rate) in the absence of hematopoietic growth stem cell factor. Although it is not clearly understood, studies indicate that estrogen and progesterone may also influence mast cell tumors.

What are the Symptoms of Mast Cell Tumors?

The clinical signs for Mast Cell Tumors can vary greatly.

What is the Treatment for Mast Cell Tumors?

Fine needle aspiration and cytology (FNAC) is the first step in the diagnosis of mast cell tumors.

Occasional MCTs (predominantly undifferentiated MCTs) must be diagnosed by other means like histopathology, special stains, etc. From the diagnosis, it can be found if the MCT is in a location that is amenable to wide surgical excision. If that is so, then the surgery should be performed right away. The excised tissue is given for assessment of histologic grade.

Complete staging includes cytologic assessment of regional lymph nodes, a complete blood count and buffy coat smear to establish peripheral mastocytosis, abdominal ultrasound with a cytologic assessment of the spleen, or liver, thoracic radiographs, and bone marrow aspiration. An incisional biopsy is performed to determine the histologic grade. The steps that comprise pre-surgical staging include standard geriatric pre-anesthetic blood work, needle aspiration cytology, of the regional node, and abdominal ultrasound. Thoracic radiographs are not adequate in determining metastasis. But they are very useful in ruling out unrelated disease processes or occult cardiopulmonary disease that can complicate anesthesia.

With regard to lymph node cytology, an occasional solitary lymph node cell is not alarming. But if they are found in clusters there is cause for worry. However, buffy coat smears, bone marrow aspiration, and aspiration of structurally normal abdominal organs is generally not indicated. In these cases, surgical extirpation of a cytologically suspicious node for histological assessment is recommended.

The extent of metastasis before surgery is determined by digital palpation. It can be improved by using diagnostic ultrasound, or computed tomography.

What are Two of the Most Successful Treatments for Mast Cell Tumors?

Surgical excision and radiation therapy are the two most successful treatment options available. In tumors, which are localized and are favorable for wide excision, surgery is the treatment of choice. Pretreatment with an antihistamine is recommended before the excision. Surgery that includes a 3cm margin of surrounding normal tissue has been suggested for MCTs.

A more recent study has indicated that 2 cm lateral margins may be adequate for the complete excision of most MCTs. Deep margins hold the same significance as lateral margins and one fascial plane deep to the lesion may be removed. If required muscle layers deep to the tumor should also be removed. All surgical margins should be investigated histologically. Inoperable tumors should be evaluated by incisional biopsy for a histologic grade.

What are the Three Therapeutic Treatment Options for Mast Cell Cancer in Dogs?

There are three therapeutic options for a low-grade or intermediate-grade distal extremity MCT.

Veterinary literature has established that complementary use of surgery to achieve clinical stage 0 disease (ie, microscopically incomplete margins), followed by external beam radiation therapy has proved successful in controlling the disease up to 2 years in 85% to 95% of cases. Many oncologists suggest prophylactic nodal irradiation (PNI) for cytologically negative regional lymph nodes. In MCTs with minimal chance of metastasis, PNI has not proven successful. But for MCTs with a high incidence of metastasis, PNI may have a positive outcome.

However, dogs with low or intermediate-grade tumors need to be monitored regularly.

When planned curative surgery proves unsuccessful, a second local therapy is needed in the form of a second excision with additional wide margins for the surgical scar or adjuvant radiotherapy. In these cases, vets also take recourse to adjuvant chemotherapy, but with little success. It has been reported that dogs with incompletely resected MCTs show decreased survival rates.

What are Alternative Treatment Options for Mast Cell Tumors?

Alternative therapies include hyperthermia (It is referred to as heatstroke or sunstroke. This condition is created artificially with the help of drugs) with radiotherapy, intralesional brachytherapy (a radioactive source is placed inside or next to the area requiring treatment), photodynamic therapy, intralesional corticosteroids, cryotherapy (cryotherapy is the local or general use of low temperatures in medical therapy or the removal of heat from a body part) and intralesional deiodized water. However, none of these therapies have been thoroughly investigated.

Treatment of intermediate MCTs with only regional node involvement have a better outcome than high-grade ones. But vets believe that till proper investigations are carried out, treatment of the intermediate grade tumors should be attached highest priority. These lesions are treated with local surgery or radiotherapy only if thorough staging fails to reveal dissemination. The outcome is not very gratifying due to distant and regional metastasis. Since the prognosis is guarded for high-grade tumors, a less expensive, coarse fraction radiation therapy protocol can be considered. For several years the use of prednisone has been found to be highly beneficial.

Intermediate grade tumors that are clearly excised, post-operative treatment remains a source of controversy for them. Studies reveal that these type of tumors show good prognosis. Therefore, vets generally do not recommend any therapy for these patients. Only regular follow-up is advised.

In cases where there is enough evidence to substantiate the presence of gastrointestinal and duodenal ulceration, sucralfate (0.5 to 1 g given orally thrice daily and rarely misoprostol to histamine blockers is advisable.

What is the Prognosis for Mast Cell Cancer in Dogs?

The outcome sorely depends upon histologic grade. Dogs with well-differentiated tumors live longer after complete surgical excision. Dogs with undifferentiated lesions die within 1 year after surgery due to metastasis. Studies have suggested that patients with a single MCT and those with multiple cutaneous MCTs have similar prognosis. Symptoms like anorexia, vomiting, melena, widespread erythema and edema associated with visceral forms of MCT have poor prognosis.

Therefore we can say that more aggressive treatment at the time of the first appearance of the disease rather than at the time of recurrence may improve the chances of prognosis.