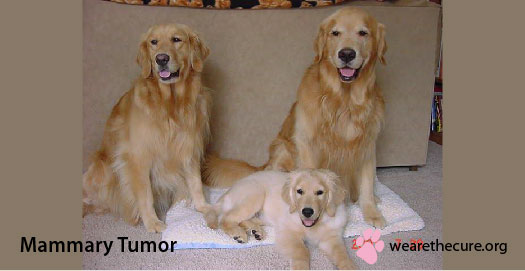 Description – Canine mammary tumors or mammary neoplasms are among the most common type of lesions found in female dogs. They arise from different types of tissues (epithelial or glandular tissues, and mesenchymal or connective tissues) in the mammary gland. Intact dogs are seven times more likely to contract the disease than ones which have undergone spaying or ovarihysterectomy (surgical removal of ovaries and uterus) before their first or second heat period. Several spaniel breeds, poodle, toy dachshund and terriers are more prone to the disease. However, a recent study has revealed that smaller breeds have a relatively low incidence compared to their bigger counterparts.

Causes- The development of these tumors is hormone-induced. The female reproductive hormone progesterone has been linked to the disease. Spaying females before 2 to 2 1/2 considerably reduces the risk of both benign and malignant tumors. But if they are spayed after this period chances of benign tumors are reduced but possibility of malignant tumors remains alive. Hormones do not have any direct mutagenic effect on mammary cells. It is believed that cell growth induced by these hormones leads to malignant transformation. In dogs which have been spayed early the source of the hormones is eliminated, which puts these dividing cells at risk of mutation and malignant transformation by environmental carcinogens. Therefore, administration of drugs that have a combined progestagenic-estrogenic activity increases the risk of malignant tumors. Growth hormone production induced by progestines, leads to a rise in the blood levels of insulin like growth factor that might lead to malignant tumors. Other factors include proteins like E-cadherin, connexins and paxillin.

Symptoms – Mammary tumors can be small, simple nodules or large, aggressive, metastatic growths. The tumors can occur in one or more glands. The clinical signs include pain, ulceration, and inflammation in the overlying skin, fixation to the skin or underlying tissues, firmness, thickening, edema (abnormal accumulation of fluid), erythema (redness). In case of advanced metastasis the disease spreads to lymph nodes, lungs, colon, kidneys, liver and sometimes bone.

Treatment – The diagnostic techniques comprise thorough physical examination, routine hematologic and serum chemistry profile, urine analysis, chest X-ray coagulogram, thoracic radiographs, caudal abdominal radiograph and a rectal examination. Fine needle aspiration with cytology (FNAC) is also conducted to differentiate between benign and malignant tumors. It is very important to find out which stage the disease is in before initiating any treatment. Surgery is the most commonly used treatment here. There are various types of them depending upon the size of the tumors, fixation to the surrounding tissue and the number of lesions. These are lumpectomy, mammectomy, radical mastectomy, unilateral or bilateral mastectomy.

Lumpectomy or nodulectomy as it is called involves removal of benign superficial, non-fixed nodules. It is a non-invasive method and is recommended if the tumor is localized. It is the most convenient method of breast conservation.

Mammectomy is indicated for patients with centrally developed lesions in one gland. If they are too firm and fixed to the skin, the abdominal fascia is also removed along with the gland.

Radical mastectomy A regional mastectomy in dogs means all the breasts, the skin
covering them, and the four lymph nodes are all removed at the same time.

Chemotherapy, radiation therapy and hormonal therapy have been used to treat inoperable patients but not with much success. Many veterinarians spay a dog undergoing a mastectomy. She will benefit by having the ovaries and uterus removed for it can minimize chances of camouflaging her tumors with a false pregnancy and eliminates the chances of ovarian and uterine tumors.  Moreover, spaying will allow easy detection of any new tumors that may arise because post surgery, the mammary tissue shrinks.

Some times radiation therapy is used intraoperatively and also post operatively to reduce the chances of recurrence.

According to the standard chemotherapy dosage Adriamycin is recommended every 21 days and oral Cytoxan every other day for 8 weeks or on day 3-6 of each 21 day cycle. More recently, many vets are resorting to mitoxantron (Novantrone™) as a first choice and then Adriamycin or Carboplatin for resistant disease. It may prevent the circulating cells from metastasizing to the lungs.