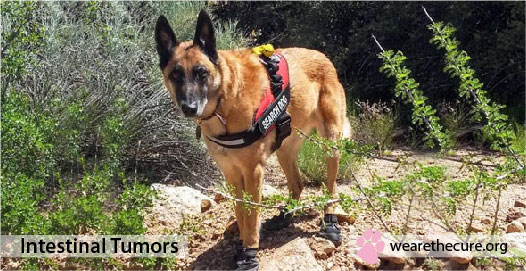 Other types of intestinal tumors include extramedullary plasmacytoma, extraskeletal osteosarcoma, mast cell tumors and hemangiosarcoma. However a report from the United Kingdom estimated intestinal tumors at 22%. The difference in the rates of occurrence between US and other countries normally stems from cultural and environmental factors especially neutering practices.

Although intestinal tumors are generally malignant in nature, there are some exceptions. In a majority of the cases, lesions that originate in the rectum are found to be benign polyps (abnormal growth of tissue projecting from a mucous membrane) or adenomas, although carcinomas also occur quite frequently.

Older dogs especially males are over represented in intestinal tumors. Breeds between 6-9 years of age are said to be predisposed. The over represented breeds, however, include Collies and German Shepherds. In dogs the most common sites for instestinal tumors are the colon and the rectum. This is also known as ‘colorectal adenocarcinoma’. In this type of cancer, the rectum is affected more than the colon. On the other hand, leimyosarcomas and gastrointestinal stromal tumors normally originate in the cecum (first part of the small intestine).

Adenomatous (benign) polyps that originate in the colon and rectum are solitary and diffuse. Although they start off as benign tumors, over the years they can aggravate into malignant structures. In that case they would be called ‘adenocarcinomas’. However, in the non-malignant form also, they can cause potential damage. On the other hand, lymphoma mostly affects the stomach and the small intestine. They are diffuse and highly neoplastic in nature.

The metastatic sites for intestinal tumors include mesenteric lymph nodes, liver, mesentry omentum (repositories for fat in the body), spleen, kidney, bone, peritoneum/carcinomatosis (it is used to describe a cancer that has metastasized widely to other parts of the body), lung, testes and skin.

The clinical signs for intestinal tumors include weight loss, diarrhea, vomiting, anorexia, less frequently melena (tarry feces), anorexia (loss of appetite) and hypoglycemia (state characterized by lower than normal level of blood glucose). However, the symptoms vary depending upon the location of the tumor. If the lesions grow very big in size, the clinical signs would include vomiting. In case of large bowel lesions, the symptoms are tenesmus (feeling of difficulty during defecation) and hematochezia (maroon stool). Sometimes due to intestinal obstruction caused by tumors, the clinical signs may include perforation and peritonitis (inflammation of the peritoneum). The presence of smooth muscle tumors within the muscular layer of the intestine have been associated with melena and anemia.

There have been cases where hematologic abnormalities like neutrophilic leukocytosis (an elevated number of white blood cells in the blood), monocytosis (increase in the number of circulating monocytes) and eosonophilia (having a high concentration of white blood cells) can be resolved following extirpation of adenomatous rectal polyp.

Other clinical signs include pain and fever. If palpation doesn’t yield good results, then doctors go for digital rectal examination. This may reveal masses or annular strictures (ring like structure surrounding the wall of a canal) as a result of rectal lesions or polyps in approximately 63% of dogs.

Clinical Pathology– Symptoms like anemia, melena and elevated blood urea nitrogen (BUN) are quite common in dogs suffering from intestinal tumors. Therefore, leukogram is important as it helps in determining changes including leukocytosis in majority of the cases.

Imaging
Plain and contrast abdominal radiographs
If it is a case of intestinal lymphoma, the liver, mesenteric lymph nodes (lymph nodes that lie between the layers of the mesentry [double layer of peritoneum that suspends the jejunum and the ileum]) and spleen would be enlarged. Plain radiographs may reveal a large abdominal mass in approximately 40% of cases. It is generally difficult to identify an abdominal mass on plain radiography as it involves other organs. Moreover, there might be peritoneal (fluid in the peritoneum that may be benign or malignant) effusion or diffuse intestinal lesions. Other abnormalities may include poor serosal detail (less fat deposits) and thickening of the stomach wall.

Contrast radiographs may be useful at times when ultrasonography fails to take clear images because of the accumulation of gas in the abdomen.

Thoracic radiographs
They are important for the proper evaluation of a person suffering from cancer. But if there is no pulmonary metastasis, the yield is generally low.

Abdominal ultrasound
This is important for identifying the location of the tumor, evaluating other metastatic sites, improving staging, guiding needle aspiration, biopsy and assisting in charting the proper course of treatment. However, ultrasounds are much more effective than radiographs in identifying an abdominal mass. Another advantage is that it also takes
lesser time.

For dogs with intestinal neoplasia, the ultrasound findings include bowel wall thickening and loss of normal wall layering. One study showed 2/3 dogs with adenocarcinoma having hypoechoic tumors with decreased motility (ability to move smoothly and actively) rates. The lesions averaged 4cm in diameter with a wall thickening of 1.2 cm. Normally, smooth muscle lesions average 4.8 cm in diameter and are normally anechoic (echo free) or hypoechoic (giving off new echoes).

Ultrasonography helps in differentiating neoplastic lesions from non-hypoechoic neoplastic intestinal disease because dogs with neoplasms normally have a thickened wall with a significant loss of wall layering.

However, leiomyomas are tumors with very smooth contours.

Endoscopy and laparoscopy
The endoscopic images in dogs with intestinal lymphoma reveal irregular, erythematous (red) patches. The duodenal wall also presents poor elasticity and distensibility (ability to expand under pressure). However, opinions of inter observers vary resulting in confusion. In case of small tissue samples, the diagnosis is much more conclusive. This is perhaps the greatest disadvantage of these non-invasive techniques.

Exploratory laparotomy
When all the above imaging studies fail to establish a definitive diagnosis, doctors go for an exploratory laparotomy. It has many utilities. These radiographs, provide a distinct view of the entire abdominal viscera (the internal organs enclosed within the abdominal cavity, like the stomach, liver, intestines, spleen, pancreas, and parts of the urinary and reproductive tracts). It also helps pathologists in collecting full thickness biopsies of all segments of the intestine. This allows the scope for surgical extirpation like anastamasis (Joining of hollow organs. For e.g, if a part of the intestine has been removed, the hollow portion is brought together and stitched). In case of carcinomatosis, the abnormality can be detected at the time of surgery only.

Surgery- It is the treatment of choice for people with instestinal tumors. However, lymphoma cannot be resected surgically. In the majority of cases, complete surgical excision is possible. For patients with no reports of distant metastasis, the survival rate is usually 1-year. However, for dogs with adenocarcinoma and  leiomyosarcoma, the rate of metastasis to lymph nodes is quite high with liver being the second most frequent site. Sometimes death occurs on the operation table itself owning to sepsis (serious condition characterized by whole body inflammation) or peritonitis.

For the surgical removal of resectable tumors, stapling techniques are used. For dogs operated upon for colorectal adeonocarcinoma, the median survival time has been found to be approximately 22 months. However, the prognosis for dogs with adenocarcinoma of the small intestine, has been found to be even worse. The median survival for small intestine adenocarcinoma is 12 days without treatment and 114 days with surgical intervention. Leimyosarcoma patients who survive the peri-operative period survive between 1.1-2 years. Some reports indicated that the median survival time for dogs with gastrointestinal stromal tumors was 3 years.

Benign rectal tumors can be removed through transrectal endoscopy. But in about 40% of cases, there was a recurrence of clinical signs and in approximately 18% of the cases, the benign lesions got transformed into malignancies.

Chemotherapy- There is no confirmed records to suggest the benefits of adjuvant chemotherapy. However, one study showed that 2 dogs suffering from leiomyosarcoma who received adjuvant doxorubicin protocol following surgical resection died after 4 months and 2 years respectively. The first one already had metastasis at the time of diagnosis. However, there were many dogs in that series which were not administered chemotherapy. Yet, they lived long. Also, there were 2 dogs with adenocarcinoma which received chemotherapy following surgery. They lived beyond 17 months.

But one report suggested that 8 dogs with gastrointestinal lymphoma had to be euthanized by 14 weeks. Piroxicam has been found to yield positive results on dogs with rectal tubulopapillary polyps. The effects of cyclooxegenase inhibitors (non-steroidal inflammatory drug) on colonic lesions following surgical excision have shown positive indications. But further research needs to be done.