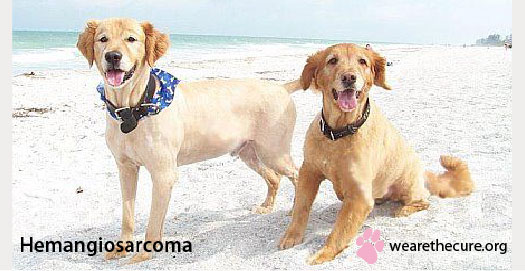 Hemangiosarcoma (HSA) also called malignant hemangioendothelioma or angiosarcoma is deadly cancer that originates in the endothelium and invades the blood vessels. Hemangiosarcoma is more common in dogs than in any other species. It accounts for 5% of all non-cutaneous primary malignant neoplasms and 12% to 21% of all mesenchymal tumors in dogs.

What are the three types of hemangiosarcomas?

Other frequent sites include the right atrium, skin and sub-cutis, and liver. Cases have also been reported in the lungs, kidneys, oral cavity, muscle, bone, urinary bladder, left ventricle, uterus, and retroperitoneum. The skin tumors consist of 2.3% to 3.6%. While splenic malignancies account for 45% to 51% and are therefore the most commonly diagnosed and the deadliest.

Are some breeds more predisposed to angiosarcomas?

Hemangiosarcoma is mostly seen in middle-aged to older dogs. Though it can occur in any breed, German shepherds, Golden Retrievers, Labradors have a predilection for the disease. It is also believed that male dogs are slightly predisposed to their female counterparts.

What are the causes of HSA?

The etiology of this disease is not exactly known. However, its exclusive occurrence in dogs points to the heritable factors that contribute to the risk. Ultimately, the interactions of these risk factors with the environment probably lead to the mutations that give rise to the tumor. Lesions arise when the cell gathers mutations that render the normal constraints of growth and genetic integrity of cells null and void. Mutations take place because the enzymes that control cell division are not foolproof. Some cells in the body divide constantly to replace dead or damaged cells. Therefore, mutations are introduced into the body regularly. Cutaneous hemangiosarcoma (found on the skin) is said to be the result of exposure to sunlight.

What are the symptoms of hemangiosarcoma?

Dermal HSA symptoms appear as a red or black growth on hairless portions like the abdomen. Dogs with less fur like Dalmatians and Pitbull terriers have a high propensity for this disease.

Whereas for the subcutaneous and visceral tumors which arise in internal organs, there is often very little warning before the time they cause severe clinical signs. A common estimate of the average time from discovery of the tumor until death occurs in affected dogs is 6 to 8 weeks. The symptoms vary depending on the location of the tumor. It could be from non-specific signs of illness to asymptomatic abdominal swelling to acute death secondary to hemorrhagic/hypotensive shock.

Common symptoms for visceral HSA are acute weakness or collapse. Other signs include lethargy, inappetence (lack of appetite), weight loss, abdominal distension (bloated abdomen), nose bleeding, fatigue, pale color of the mucous membranes of the mouth and the eyes, and increased respiratory rates.

Dogs with cardiac HSA show signs related to pericardial temponade (http://en.wikipedia.org/wiki/Cardiac_tamponade) and associated right-sided heart failure such as exercise intolerance, dyspnea (shortness of breath), and ascites (excessive fluid in the peritoneal cavity), muffled heart sounds, and pulses paradoxus (a variation in pulse quality associated with respiration). There is clotting of blood inside the blood vessels called disseminated intravascular coagulation or DIC. It uses up all of the blood clotting elements quickly and dogs usually have platelet deficiencies, increased blood clotting at times, a decrease in fibrin content in the blood, and an increase in fibrin degradation products (FDPs). This probably leads to death in most cases.

What is the treatment for Hemangiosarcoma?

But before the surgery appropriate treatment for shock-like crystalloids, colloids and severe coagulation anomalies should be addressed. The surgery here is quite aggressive because all the locally affected tissues have to be removed.

For splenic HSA vets go for splenectomy. During operation, the entire abdomen is thoroughly examined and all the lesions are sent for histopathology. Dogs undergoing this surgery are susceptible to arrhythmia (irregular heartbeats). Thus, post-operation an ECG is needed to monitor the heartbeats of dogs. This issue gets resolved in 24-48 hours. An open or thoracoscopic pericardiectomy is a palliative procedure that allows effusion to escape into the thorax instead of accumulating in the pericardium where a small volume can restrict function.

Other forms of treatment for Hemagiosarcoma include:

Since a vast majority of the tumors are metastatic, chemotherapy is recommended after the surgery. The standard chemotherapy protocol for Hemangiosarcoma is single-agent and combination doxorubicin, (DOX) intravenously given every 3 weeks. Other combinations used are vincristine, cyclophosphamide and methotrexate. But these have not yielded satisfying results. In cases, where surgery is impossible due to the location or the invasiveness of the disease, DOX-based chemotherapy is known to have reduced the gravity of the disease.

Patients treated with immunotherapy using liposome-encapsulated muramyl tripeptide-phosphatidylethanolamine (L-MTP-PE) have shown marked improvement. The drug is not available in the US. But it has gained orphan status in the EuropeanUnion and is being used in the treatment of pediatric osteosarcoma.

It is not so often used due to the high metastatic rate of the disease and the involvement of anatomic sites. A combination of palliative RT with chemotherapy may prove beneficial, but it awaits further investigation. It may prove beneficial in cases like solitary dermal HSA or incomplete resection.

What is the prognosis for Hemangiosarcoma?

In the case of splenic HSA treated with surgery alone, the prognosis is alarming. The patient survives between 19-86 days. Surgery combined with chemotherapy increases the median survival days from 141 to 179 days. In one study, the addition of immunotherapy to standard chemotherapy increased the median survival days to 273. Patients with non-ruptured spleens are believed to have better chances of survival than those with ruptured ones.

Overall the prognosis is very poor for atrial HSA as it is for splenic HSA.

Tumors in Domestic Animals- Donald J. Meuten, DVM, Ph.D., is a professor of pathology in the Department of Microbiology, Pathology, and Parasitology at the College of Veterinary Medicine, North Carolina State University, Raleigh