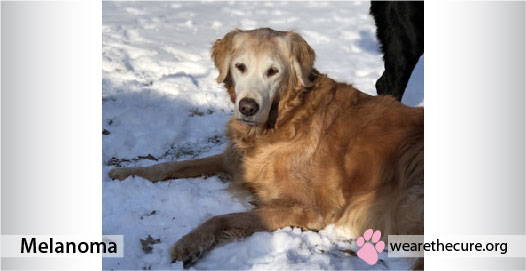 Description– Lesions of the melanocytes and melanoblasts are relatively common skin tumors in the dog. They account for 5-7% of all canine skin tumors. Melanoblasts are neuroectodermal (embryonic ectoderm that gives rise to nervous tissue) in origin, and during fetal development they migrate to the skin and hair bulbs. Mature pigment producing cells are referred to as melanocytes. They are found in many parts of the body where there is a pigment like the hair, skin and eye. These cells are found between the basal keratinocytes (this is the major constituent of epidermis. It comprises 95% of the cells found there. Keratinocytes found in the stratum basale are sometimes called “basal cells” or “basal keratinocytes”) the epidermis and the hair bulb. Melanin produced by melanocytes, is stored within melanosomes and is transferred to keratinocytes by a process known as cytocrinia (the same process by which melanin is transferred, in a normal epidermis, from melanocytes to keratocytes). These malanosomes gather within the cytoplasm of keratinocytes and protect the skin from the harmful effects of ultraviolet radiation. When melanocytes fail to reach the epidermis, they grow into intradermal melanocytes (deposition of pigment producing cells into the skin). In the dermis there is a second group of melanin containing cells called melanophages. They have phagocytosed melanin (melanin cells which have engulfed bacteria and other microorganisms) that enter the dermis due to leakage from or destruction of epidermal or follicular melanocytes. Melanocytic tumors are common in older dogs that have dark pigmented skin. They arise mostly in areas of haired skin or in the oral cavity.

Generic causes- The exact etiology is unknown. But some vets believe that stress, trauma or sometimes excessive licking of a particular area of the body can cause cells to multiply randomly. During cell division, there may be sudden changes in genetic structures resulting in the formation of cancer cells.

Malignant melanoma can be further divided into:

Melanocytic nevus- Non-malignant forms of tumor are often referred to as melanocytic nevus. A nevus cell is usually a changed melanocyte. It implies any congenital, melanin pigmented lesion. They are typically well defined, deeply pigmented, less than 2 cm in diameter, dome shaped, firm and broad based. But they are mobile under underlying tissues.

Melanocytoma- This is a benign tumor arising from the melanocytes in the epidermis, dermis, or adnexa (appendages of an organ), but primarily originates from the external root sheath of the hair follicle. Dogs which are below 1 year of age have a propensity to develop the disease. But it is difficult to establish whether these are congenital lesions or not. Dogs between 5-11 years of age have a higher incidence. The breeds at increased risk include Vizsla, Miniature Schnauzer, Doberman Pinscher, Airedale Terrier, Bay Retriever etc. No sex predilection has been noted. Predilection sites for melanocytes in dogs are the eyelids. They vary in their appearance. The smallest lesions are small, pigmented macules, while the largest tumors may be 5 cm or more in diameter. The color varies from black to shades of brown, gray and red. Tumors that originate from the haired region are non-malignant. But lesions that develop on the mucocutaneous junctions are cancerous.

Treatment- Surgery is the treatment of choice for melanocytomas.

Prognosis– Since the lesions are benign, surgical excision is completely curative.

Malignant Melanoma- The majority of malignant melanomas occur in the oral cavity and the mucocutaneous (relating to the mucous membranes of skin) junction of lips, with approximately 10% of cases arising from the haired skin. Head and scrotum are moderately predisposed. The tumors could be highly pigmented or lack pigment and may invade deeply into the sub-cutaneous tissue and along fascial planes. They grow rapidly and can be fatal. They usually metastasize via lymphatics to regional lymph nodes and lungs. They also spread to other unusual parts of the body like brain, heart and spleen.

Cutaneous Malignant Melanoma- This may arise in the nail bed or on the foot pads. It may appear as a discrete mass, an ulcerative tumor, or a diffuse swelling of the affected toe. Lameness is the first symptom in this type of lymphoma. Nail bed and foot pad tumors are secondarily infected and are often wrongly diagnosed as chronic infections.

Diagnostic techniques– For tumors that arise from the nail bed, radiographs of the affected toe should be performed, since melanomas generally result in bone destruction. Careful examination of the draining lymph nodes is very important. Fine needle aspirates of the lymph nodes are performed if lymph nodes are found to be enlarged. X-rays of the lungs are also important to evaluate for metastatic disease, prior to treatment.

Treatment– Surgery is the treatment of choice for local cutaneous melanomas. For nail bed tumors, vets have to very often take recourse to amputation of the affected bone due to extensive bone involvement. Melanomas of the foot pads pose a challenge for surgical removal. Many tumors will involve the larger weight-bearing pads, where surgery may be limited due to loss of function of the leg. In some patients, amputation of the leg may be the best option for achieving local tumor control

Radiation therapy may be useful for the treatment of large, inoperable melanomas or as an adjunct to tumors with incomplete margins following aggressive surgical excision. Melanomas respond well when radiation is given in large doses, less frequently. Radiation therapy is administered once weekly for 4 treatments. Patients are required to be kept under anesthesia during the course of the therapy. Side effects are minimal with this protocol. But sometimes, it may result in sloughing (hollow) of the nails or foot pads. The nails and foot pad surface will re grow and should not cause longstanding problems.

The standard chemotherapy protocol is combination of carboplatin with surgery and/or radiation therapy. Carbo-platin is administered intravenously once every 3 weeks for a total of 4 treatments. Carboplatin suits dogs well, and the side effects are minimal.

Prognosis About 50% of the melanomas of the nail beds and foot pads spread to other sites of the body. Although, it cannot be predicted which dogs have a high incidence for metastases, the mitotic (method of indirect cell division) rate reported on the biopsy report may be helpful in some patients. A mitotic rate of less than 3 is strongly associated with more benign behavior and lower risk of metastases. Recurrent malignant melanomas have a less favorable prognosis than the initially treated tumor.

Radiation therapy is effective for non-resectable melanomas. Some dogs achieve a complete regression of tumor. Radiation therapy is also beneficial in treatment of incompletely removed cutaneous melanomas. In certain cases chemotherapy with carboplatin may be useful in delaying or preventing the onset of metastases in dogs with cutaneous melanomas; however no published studies exist to confirm a survival advantage with the use of chemotherapy.

Oral Melanoma – Oral melanomas account for 30-40% of all oral tumors in dogs. They are seen along the gums, the lip, the palate and sometimes the tongue. It is a malignant form of melanoma. These tumors metastasize to the head and neck and may also sometimes invade adjacent bone tissue. It can readily spread to the lymph nodes, liver, lungs and kidneys. So, early detection is critical.

Treatment– Surgery combined with radiation therapy is the preferred treatment for most clients. Supporting therapy is often needed for arresting the growth of metastatic cancer cells. Until recently, the most popular option of supporting therapy was chemotherapy. But cancers, like canine melanoma, have been found to be highly resistant to chemotherapy. Therefore, immunotherapy, is slowly emerging as a potential alternative for controlling the growth of tumor cells. Recently, a therapeutic vaccine has been launched. But its availability is restricted. It is mainly indicated for the treatment of dogs with stage II or stage III oral melanoma and for which local disease control has been attained.

Prognosis– Oral melanoma is considered to be an extremely malignant tumor because of a high degree of local invasiveness and high metastatic propensity. Small primary tumors are completely curable. Median survival times for dogs with oral melanoma treated with surgery are approximately 17 to 18, 5 to 6, and 3 months with stage I, II, and III disease, respectively.

Symptoms– In iris melanoma a discrete, dark, nodular mass originates from the iris. Ciliary body melanoma appears as a dark intraocular mass that protrudes through or distorts the pupil. Choroidal melanomas affect only the choroids and retina. In the initial phase no visual deficits or inflammations can be seen. But at a later stage, the patient may be beset with complications like blindness, glaucoma, intraocular detachment and retinal detachment.

Treatment– For the immediate removal of the iris mass, vets take recourse to diode laser photocoagulation. E-nucleation (removal of the nucleus) is done if the iris appears to be in a distorted form and the lesions appear to be progressive. If the lesions are small and confined, a follow-up after every 2-3 months may be required. But if there is any serious cause for concern, in that case regular consultation with the oncologist may be needed.

Prognosis- The prognosis is good. A vast majority of the tumors are benign, with minimal risk of metastasis.

Description– This is a type of ocular tumor that occurs in canines in the age group of 5-6 years. Mostly female dogs and German Shepherds suffer from this disease. These lesions have so far proved to be benign in nature but quick medical intervention is important.

Symptoms– There are not enough symptoms for the disease. Only pigmented masses arising from melanocytes in the sclera or subconjunctival connective tissue may be noteworthy. In other instances, sometimes local corneal invasion, epiphora (overflow of tears onto the face) and mild conjunctival irritation are palpable.

Treatment- The doctor would first suggest a gonioscopy (it is important in diagnosing and monitoring various eye conditions associated with glaucoma). It helps in distinguishing invasive intraocular tumors from limbal melanoma. The former is a kind of unexplained glaucoma that can have dire consequences.

Treatment is suggested if the growth is too rapid. But given the non-malignant nature of the tumor the invasion is usually not so aggressive. If surgery is needed vets go for lamellar keratectomy/sclerectomy with graft placement. After surgery, beta-irradiation and cryosurgery (use of extreme cold to destroy tissues for therapeutic purposes) are used. A more recent breakthrough is laser coagulation (coagulation or clotting of tissues using a laser).

Prognosis– Re growth takes place in more than 30% of dogs following surgery. But it takes around 2-3 years before it invades the anterior chamber and the need to go for enucleation arises. This process is absolutely curative and is generally recommended if painful intraocular ailment exists.