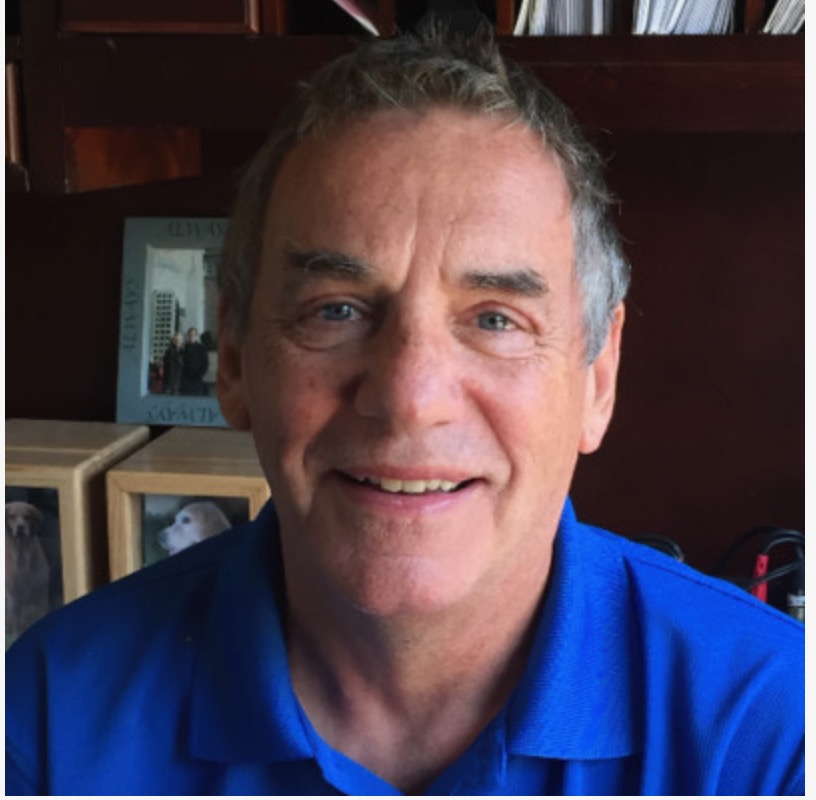 Gary Nice has an extensive entrepreneurial business background. He started in television and radio production, producing commercials, corporate videos and then moving into talk radio. During his years in talk radio he owned multiple companies with programming provided for thousands of radio stations and the companies revenue reached over 10 million. He has spent a lot of time consulting and advising young entrepreneurs on ways to grow their business. Here is why he fights for a cure in his words:

It was on January 14th, 2006 that I lost my beautiful Bailey, a loving Golden Retriever. It was three days after Bailey’s 8th birthday. I had to put Bailey to sleep because of an advanced case of cancer that caused him to go from a strong, active loving dog to a dog who looked at me with such eyes that said, please help me it is my time. I did not know there was anything wrong with him. He didn’t act any different until one day, his cornea was red and we found out he was hemorrhaging in his eye because his blood pressure was 238. A dog with a blood pressure of 200 is hemorrhaging. He could not see out of that eye and on days when the hemorrhaging was bad, he was completely blind in both eyes.

After several weeks of tests and medicine, an X-ray of Bailey lungs showed the cancer had metastasized. His X-Ray looked like a snowstorm. If I only had known of this earlier we may have been able to do something. So for the next month or so, we gave him as much love as possible and practically anything else he wanted. It was a time of spoiling him, loving him and crying, lots of crying. Anyone who knows me was aware of how special Bailey was to me. He was my heart dog. We did so much together and he gave everything he could to loving me and being my friend. I am still hurting from his loss. I don’t know if I will ever forget that moment when we put him to sleep, and I was holding onto him at the Vet’s, loving him, kissing him and telling him I am so sorry and then I felt him go limp in my arms.

When I found out that Bailey had cancer, I was devastated. I began trying to find somewhere or somehow to save him, even though they said it was at a very advanced stage and there was no hope. He was only 8 years old; he had so much of his life ahead. In that research, I found out how much work needed to be done to fight cancer in dogs and how many dogs were dying every day, many prematurely, of cancer. It was at this point that I swore to myself that I would dedicate the rest of my life, and resources, to finding a cure to these cancers that are killing our dogs. It was that year that I founded the National Canine Cancer Foundation with my wife and two other friends.

Since then we have lost five more of our Goldens. Our sweet Ashby who I swear was more human than dog. You could just seem him thinking. He was only 9 years old. And our sweet, gentle Duncan who had the greatest face. When he looked at you, it always made you smile. We found out after he was gone how much of our lives and our other dogs lives were managed by him. He was our clock always telling us at 8am and 5 pm that it was time to eat. He was only 6 years old. We miss them all so much.

This is for you Bailey, Ashby, Duncan, Casey, Emma, Wrigley, and Armani. Six dogs lost to Cancer in six years. Click here for Bailey’s Story. 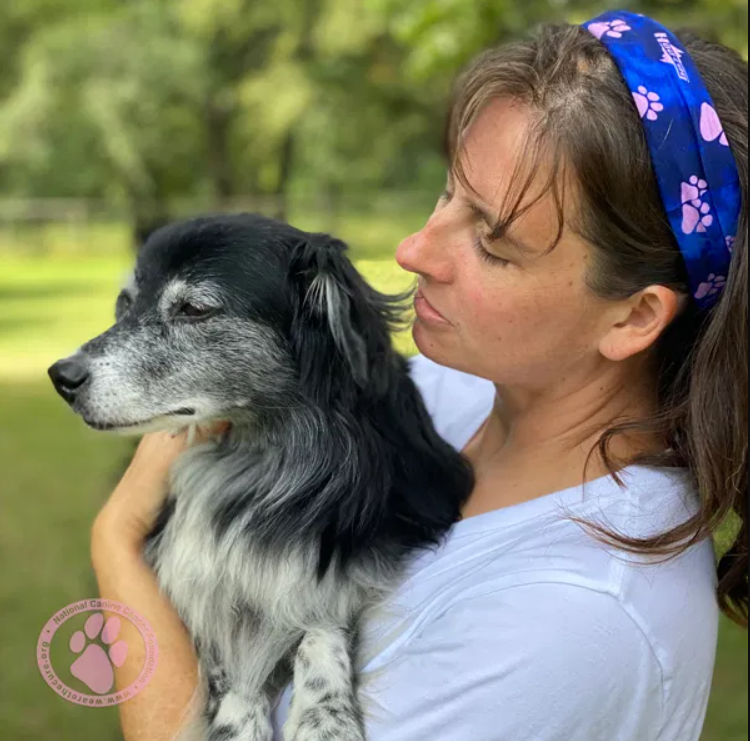 Sara Nice is a member of the Board of Directors and one of the founders of the National Canine Cancer Foundation. Her qualifications include graduating with a BS degree in Radio/TV/Film from Texas Christian University. She spent her early career in talk radio as the Director of Operations. Following her radio career she found dog showing and enjoyed that as a hobby, but worked as a dog photographer for a few years while still consulting on radio projects. This is why she fights for a cure, in her words:

We lost four dogs in four years to cancer. Now we have lost a total of six dogs to cancer, one brain tumor, one sarcoma, and four to Hemangiosarcoma. We know HSA to be the meanest of the cancers as it takes them from us so quickly. Each of our stories is equally as heart wrenching though. Gary told of my heart dog Duncan and my first Golden Ashby, let me tell the story of Armani, who ended up with two cancers. We took Armani in from one of our friends and mentors who died of cancer. One day we noticed his mouth was bloody and we found he had oral melanoma, which had a good treatment option. We were winning the battle and on the morning we were going for the last radiation treatment we couldn’t get Armani to come out of his crate. When we finally were able to get him out and to the vet, they found that he had Heart Hemangiosarcoma also. They kept him and tried draining the fluid off his heart to see if we would be able to treat that as well, but it came back too quickly and we had to say goodbye to him. After we lost Armani, we lost Riggs to a sarcoma and Emma to Hemangiosarcoma. Too many dogs lost and only one of the seven has made it to age 10. I continue to fight so that we can experience the love of our sweet dogs for so many more years. 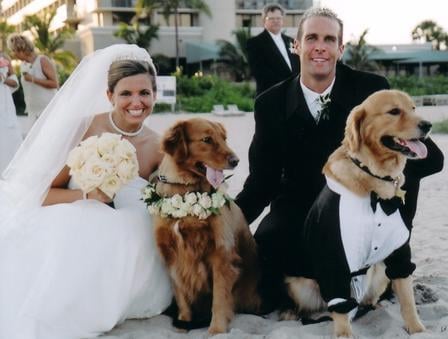 Chris Pike has worked in radio in the sales and marketing department in the early part of his career. He and his wife found the National Canine Cancer Foundation when one of their Goldens was facing cancer. He took on our very first branded event, the Bark and Bowl and was so successful with it, he joined the NCCF to continue doing and growing our events. He has grown the Bark and Bowls in 4 different cities for the past 10 years. He has created the NCCF’s largest event, the Cincy Pup Crawl, which has made enough to pay for two of our grants over it’s 5 year run so far. He continues to work with volunteers to create small and large events around the country.

Eileen Pike works along side her husband Chris to fight cancer in dogs. She has an extensive background in special events and social media. She is always the friendly face checking you in at most of our biggest events and then you can find her racing around the event wearing many hats and doing it all to honor the dogs she has lost to cancer. 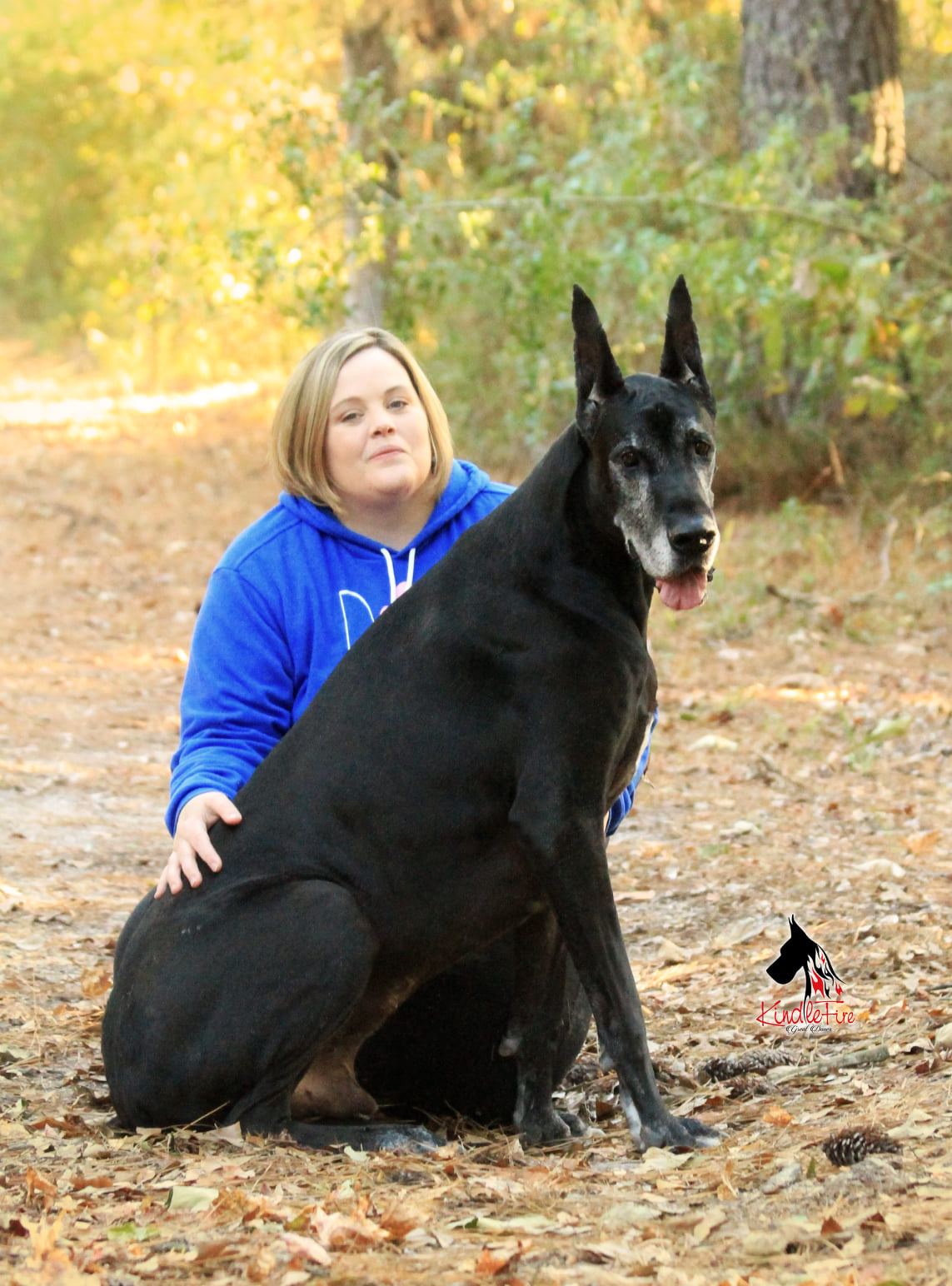 From cats, dogs, horses and everything in between I’ve always been an animal lover. Growing up I wanted to be a veterinarian but ended up in Business/Advertising/Graphic Design. I have an Associates Degree in Advertising/Graphic Design from Kilgore College in 2005 and a Bachelor’s Degree in Business Administration from LeTourneau University in 2008. This career path change eventually led me to the NCCF and a new passion to join the fight against canine cancer. Dogs have always been a part of my life but in 2000, I got my first Great Dane. Little did I know they’d end up being my heart breed. In 2013, we lost our first Great Dane to the dreaded c-word, cancer. The timing seems like fate intertwined me with the foundation because this happened to be 3 days after I started working as their Online Store & Merchandise Manager. A month prior to my start date, Cloe had a mass removed from the nasal area between her eyes. It came back as malignant and unfortunately they were not able to get all of it. We had a few good weeks with her after the surgery and then she went downhill. On July 5, 2013, we said goodbye to our beloved Cloe. We were one of the lucky ones and had almost 10 great years with her. Fast forward to 2018 and our sweet girl Layla – Bridges Sweet Lil Layla RN who was co-owned with a friend and co-worker here at the foundation. They tell you how quickly Osteosarcoma can appear but you’re never fully prepared for it. A few months shy of Layla’s 11th Birthday, Osteo reared its ugly head full force. Soon after that we all found ourselves sitting next to Layla while we said goodbye.

Since 2010 I’ve been involved in AKC Rally & Obedience with our dogs. In 2012, I got my first AKC conformation Great Dane and the rest is history. My life revolves around my dogs, dog shows, dog friends and family and of course dog related work both in advertising/graphic design and my position with the NCCF as their Online Store & Merchandise Manager. I’m blessed to be owned by multiple AKC conformation champions and performance title holders in two breeds, Great Danes & Beagles. Both breeds are prone to developing cancer. 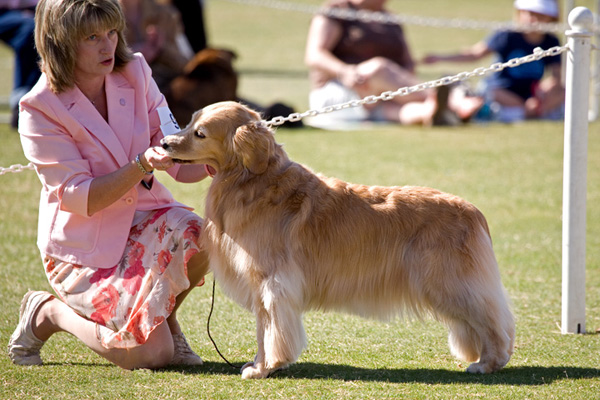 Vicki is our Customer Relations specialist. She is wonderful at speaking to everyone who has lost their dog to cancer. She writes heartfelt responses and thank you notes to each of our donors. In her words, this is why she fights for the cure:

I lost my first Golden when he was 8 to a giant tumor on his spleen which the vets told me was called Hemangiosarcoma. We had no warning anything was wrong him until he collapsed one morning. Barney was my first competition obedience dog, and we won many ribbons and trophies. To have him snatched away from me so quickly was really hard. It’s been over 30 years now and 5 more Golden Retrievers have also been snatched from our family due to the scourge of canine cancer. The youngest being six to a brain tumor. Many of my friends Goldens go through the same, losing them to cancer. To help fund research and treatments to eradicate canine cancer is to honor the loving, smart, beautiful dogs our family and friends have prematurely lost and having hope for the future. So for: Barney, Chucky, Kimby, Tessie, Ryker and Tasha, (two brain tumors/four hemangiosarcomas) our family supports the National Canine Cancer Foundation. ~ Vicki Lipski

Peter graduated with a Bachelors in Commerce from Gujarat University. Having an interest in Graphic Design he completed Diploma in Graphic Design in 1996 from local training institute. Peter joined the NCCF in 2014. Before joining to NCCF he has been working as a freelance graphic designer. Over the years he has built up extensive experience in graphic design, working with us to develop branding and has designed countless graphics that you see on the site or in our printed material. His high standards, eye for design and detail, technical expertise and ability to communicate well with the team to ensure quality design. His gracious approach delivers outstanding output.

Board of Directors
Scientific Advisory Board