Which Dog Breeds are Prone to Cancer? Why?

Are some dog breeds more prone to cancer than others? The simple answer to this question is “Yes!” However, explaining why some dogs are more likely to get cancer is more complex. It’s true, as commonly thought, that some dog breeds are more prone to cancer than others.  However, there are a plethora of other risk factors that can contribute to cancer in dogs. No one can predict which dogs will get cancer but being aware if your dog is at high risk may alert you to be more vigilant.

Why are certain Breeds predisposed to cancer?

Statistics support the idea that genetic characteristics can contribute to higher rates of cancer, although more research is needed to better understand which genetic factors are involved in increasing cancer risk. It is thought this increased risk may be caused by either a combination of genes or a single gene.

It has been noted that Golden Retrievers, Boxers, Bernese Mountain Dogs, German Shepherds and Rottweilers are generally more likely to develop specific types of cancer than other breeds.

Other specific examples such as the high incidence of Osteosarcomas (bone cancers) in long-limbed breeds like Irish Wolfhounds, Great Danes, and Scottish Deerhounds support the theory of genetic factors. In their case, the shared genetic heritage that gives these dogs their graceful legs may also give them a shared predisposition to cancer.

Sadly, it is estimated that about 25 percent of all purebred dogs die of cancer while 45 percent of those who live past ten years old will likely succumb to cancer. Cancers in dogs are very similar to human cancers and this has allowed the use of modern chemotherapies to treat dogs.

Which Types of Cancers are Pure Bred dogs more prone to?

The table below gives an indicator of the most common types of cancers various dog breeds are prone to have. This doesn’t mean other breeds can’t succumb to the cancers or that a specific breed may only get one type of cancer. The information presented is based on statistics of cancer in dogs over many years which have shown a pattern whereby some breeds are more likely to get specific cancers than others. 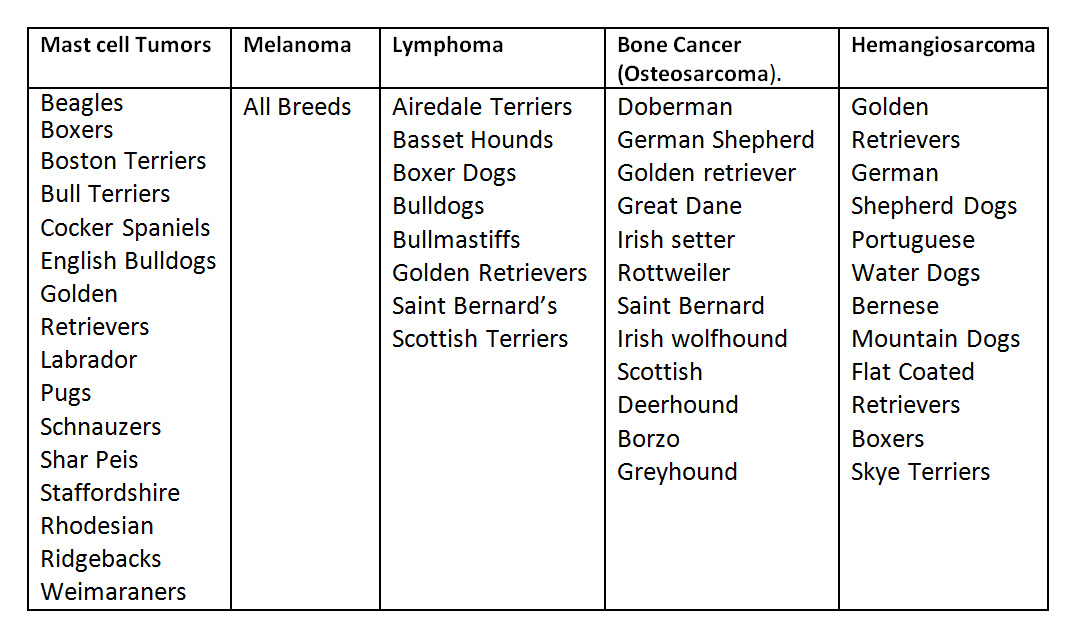 They are typically seen in dogs ages 10 years and older, and small breeds are at higher risk of developing melanoma, although any breed can be diagnosed with melanoma. Malignant melanomas are also more likely to appear in the toes or toenail bed of black dogs.

It is most common in middle-aged and older dogs, and some breeds are pre-disposed.

Bone cancer can affect any breed of dog, but it is more commonly found in larger breeds.

Although dogs of any age and breed are susceptible to hemangiosarcoma, it occurs more commonly in dogs beyond middle age (older than 6 years).

There is much discussion on the topic of health in purebred dogs versus mixed breeds. Regarding cancer in dogs, however, the Veterinary Clinic of UC Davis collected data on 90,000 dogs between 1995 and 2010 to determine the proportion of mixed breed and pure breed dogs with genetic disorders.

There were 27,000 dogs in the group with disorders. The results found at least ten genetic disorders that were more prevalent in purebred dogs, but not cancer. Their study suggested that there was no greater cancer risk for a pure-bred dog than a mixed-breed dog.

As is the case with humans, cancer occurs more frequently in older dogs. While the exact cause of cancer is not known in humans or animals, experts suggest that there could be several reasons for the suggested relationship between older age and cancer. For example, the immune system may weaken with age, but it could also be argued that an older dog may have had more exposure to carcinogens in the environment.

Cancer incidence is generally higher in female than in male dogs, a difference probably explained by the higher rate of mammary cancer in female dogs. Mammary cancer is the most commonly diagnosed tumor in un-spayed female dogs that are more than seven years of age while male dogs rarely develop such a tumor.

Neutered Or Not Neutered

There are mixed reviews on neutering your males and females and what the optimum age to carry out the procedure may be for prevention of cancer. In female dogs neutering before their first heat can reduce the chance of them developing breast cancer and will eliminate the risk of uterine and ovarian cancer.

Can Diet be a Risk Factor?

A quick look online suggests that more than 80 percent of pet dogs are fed dry dog food, kibble or commercially pressed foods. Some brands of dog food may contain ingredients such as preservatives, fillers and chemicals that are detrimental to dogs. Additionally, some cancer-causing toxins like aflatoxin, a byproduct of mold, can make their way into pet food. When exposed to aflatoxin, there’s a much greater risk of developing liver cancer, especially for dogs with hepatitis. As recently as September 2020, a retailer recalled pet food products after a sample was found to contain unsafe levels of aflatoxin.

Does Obesity play a Role in Canine Cancer?

Many studies have been carried out to test the relationship between obesity and cancer.

Obesity is associated with an increased risk of mast cell tumors, mammary tumors, and transitional cell carcinoma of the bladder in dogs in retrospective and epidemiologic studies.

There are known carcinogens in our environments that can contribute to cancer in our dogs. Excessive exposure to the sun, tobacco smoke, herbicides, pesticides, and insecticides, as well as air pollution and smog in urban areas, can all aid in the development of cancer. In regard to sunlight, pit bulls and other breeds with light-colored short coats and less hair on their undersides are vulnerable to skin cancer.

If you know your dog’s breed is more prone to cancer because of the risk factors discussed then be very observant, investigate symptoms quickly, provide a high-quality diet and ensure they are allowed adequate exercise, to try to mitigate the risk.

Many of the risk factors for cancer in dogs are beyond your control. However, reducing the known cancer risks in your dog’s environment can offer some protection.

When considering adding a new furry member to your family, you can keep in mind which dog breed is more prone to cancer, but really, chose a breed that most closely matches your family’s lifestyle.

Remember: Early Detection of Cancer in Dogs is critical

As with any disease, early detection is critical for the best outcome.

We recommend that you Check Your Dog on the 14th of every month for lumps, bumps, or anything out of the ordinary.  You can download the full Check Your Dog flyer here.

Also, check here for the 10 Early Warning Signs of Cancer. If you notice anything unusual, take your dog to see a veterinarian right away.