Lymphoma is the Most Common Dog Cancer 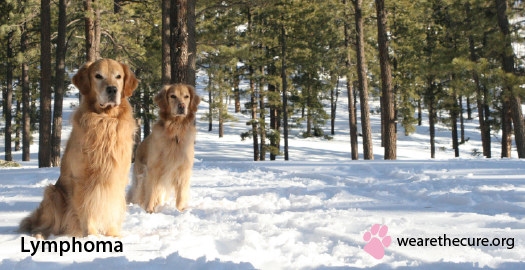 Malignant lymphoma or lymphosarcoma is one of the most common neoplasms (tumor) in dogs. They usually originate in lymphoid tissues, like the lymph nodes, spleen, and bone marrow. However, they can arise in any tissue in the body. Lymphoma accounts for approximately 7-24% of all canine neoplasia (formation of new tissue) and 83% of all canine hematopoietic (blood cells) malignancies.

Lymphoma is generally seen in middle-aged to older dogs (median age, 6-9 years). Breeds that are believed to have a higher incidence of lymphoma include Boxers, Bull Mastiffs, Basset Hounds, Saint Bernards, Scottish Terriers, Airedales, and Bull dogs. Dogs with a lower risk include Dachshunds and Pomerians. Neutered females tend to have a better prognosis.

World Health Organization (WHO) has classified different stages of lymphoma based on its degree of metastasis and invasiveness. They are as follows:

Obviously, the sooner your dog has been diagnosed the better the chance of survival as the disease progresses health effects get more and more severe. Testing for lymphoma is typically done with fine needle aspiration but is often accompanied by a battery of tests such as blood and urine tests, X-rays, and sonograms.

What Causes Lymphoma in Dogs?

The causes are not understood and probably involve both genes and the environment.  Genetic mutations and chromosomal aberrations (change in the normal structure of DNA) have been reported in canine lymphoma, and most of the DNA changes appear to be acquired throughout the dog’s life. Although certain viruses have been associated with some lymphomas in people, that has not been established in dogs.

In both people and dogs, certain environmental factors are believed to trigger the disease.  People and dogs living in industrial areas have an increased risk of lymphoma. Moreover, household use of the herbicide 2,4-D and storage of paints and solvents were also risk factors for lymphoma in dogs. One study found that living within 10 miles of a nuclear power plant, or within 2 miles of a chemical supplier or crematorium were possible risk factors.

A weak immune system has also been identified in dogs with lymphoma.

How Many Types of Lymphoma are There in Dogs?

There are basically 5 types of Lymphoma:

How is Canine Lymphoma Treated?

The most common treatment for canine lymphoma is chemotherapy. Other methods like surgery or radiation therapy can be advised by veterinarians based on the dog’s condition. Canine lymphoma chemotherapy costs can range between $1,000 – $10,000 with an average cost of about $5,000.