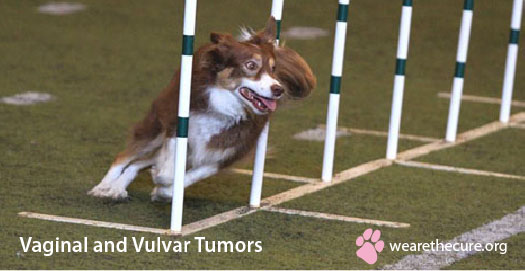 Description – Vaginal and vulvar tumors are the second most common canine female reproductive tumor after those of the mammary gland. They constitute 2.4% to 3% of canine neoplasia. Unlike mammary gland tumors, vaginal lesions are non-cancerous in nature and originate from the smooth muscle tissues (involuntary muscle found in arteries, veins, bladder and uterus).

Leimyomas mostly originate from the vestibule of the vulva (a triangular space between the nymphae, in which the orifice of the urethra is situated). They manifest themselves both as extraluminal and intraluminal forms. The extraluminal ones are slow growing tumors that appear gray, white or tan. They are well differentiated and poorly vascularized (supply tissues with blood vessels). The intraluminal tumors on the other hand are found on the vaginal wall. They are firm and ovoid. Sometimes there is ulceration due to exposure, irritation or secondary infection.

Symptoms – The clinical signs not commonly seen may include vulvar bleeding or discharge, an enlarged vulvar mass, dysuria (painful urination), hematuria (blood in the urine), tenesmus (difficulty in defecating), excessive vulvar licking and dystocia (abnormal difficulty in childbirth or labor). Tumors that lack pedunculation (the stalk like base to which a polyp or tumor is attached) and tend to occur frequently in the vaginal and vulvar region eventually progress to malignancy.

Treatment – Since it has been found that vaginal tumors are hormone dependant, ovarihysterectomy is the treatment of choice. This also allows examination of the abdominal organs for the presence of metastasis. Conservative surgical extirpation combined with ovarihysterectomy results in complete remission of the benign tumors. The ones found on the vaginal wall can be removed by transfixing sutures in the pedicle. Sometimes due to the poor visibility of pedicle or urethral papilla (the slight projection in the vestibule of the vagina marking the urethral orifice), ovarihysterectomy becomes difficult. To make things simpler and easier a dorsal episiotomy (an incision made through the perineum to assist childbirth) is performed. It also assists in the surgical extirpation of extraluminal tumors.

However, if the primary tumor and secondary tumors cannot be removed completely, vets take recourse to radiation therapy.

Prognosis – The prognosis for benign vaginal and vulvar tumors is quite good. However, the outcome for adenocarcinomas and squamous cell carcinomas is generally guarded.