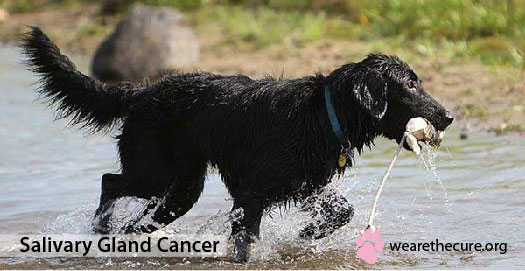 Description– Primary salivary gland cancer is not very common in dogs. However, all the cases so far have been reported among older dogs in the age bracket of 10-12 years. No specific breed or sex predilection has been reported in dogs. The majority of salivary gland cancers are adenocarcinomas. But several other types like osteosarcoma, mast cell, sebaceous carcinoma, malignant fibrous histiocytoma, squamous cell carcinoma, mucoepidermoid carcinoma, anaplastic carcinoma and complex carcinoma have been reported. They can develop from major or minor accessory glands throughout the oral cavity like parotid (situated near the ear), mandibular (pertaining to the lower jaw), sublingual (below or beneath the tongue) and zygomatic (a salivary gland). These tumors are generally malignant. The mandibular gland is most commonly affected. Malignancies are locally infiltrative and metastasis to regional lymph nodes is common. Distant metastasis has been reported, although very few. Benign lipomatous infiltration (Nonencapsulated adipose tissue forming a lipomalike mass, usually in the interatrial septum of the heart, where it may cause arrythmia [abnormality in the rhythm of heartbeats] and sudden death) of the salivary gland has been reported in dogs.

Causes- The exact cause of any cancer has not been established yet. But it is believed that neoplasms are the culmination of several inconducive factors like exposure to radiation, chemicals and administration of hormonal injections. Some animals are genetically susceptible to developing cancers. Mutation of chromosomes induce the onset of the disease. The mutated cells disrupt the normal cell growth and regulation, resulting in the over production of oncogenes.

Symptoms– The clinical signs include hallitosis (bad breath), dysphagia (difficulty in swallowing), exophthalmus (abnormal protrusion of the eyeball), or a unilateral painless swelling of the upper neck, base of the ear (parotid) upper lip or maxilla or mucous membrane of lip or tongue.

Fine needle cytology help doctors in differentiating between benign and malignant tumors. Regional radiographs may reveal periosteal reaction (formation of new bones in response to injury) on adjacent bones or displacement of surrounding structures. CT imaging is useful in determining the proliferativeness of the disease i.e., the extent of  metastasis. Biopsies are important in charting the course of diagnosis.

If the disease has not metastasized and the tumor is low grade doctors generally go for surgery. Unfortunately in certain cases, the tumors are extracapsular and widely extensive throughout the regional area. It may also involve several vital structures. Complete surgical excision of the ipsilateral (same side) neck can be performed with good prognosis. There may be temporary impediments like inability to blink the eye. But this can be corrected with the help of tarsorrhaphy (surgery in which the eyelids are partially sewn together to reduce the opening) or eye drops. But this surgery has to be performed very carefully followed by radiation therapy. Otherwise this complication may attain severe proportions. Post operative radiation therapy has a good prognostic importance. The potential of chemotherapy in the control of salivary gland adenocarcinoma has not been adequately explored.

Prognosis- The prognosis for salivary gland cancer is not known in dogs. Reports, however, suggest that aggressive surgical extirpation followed by radiation therapy can attain permanent control of the disease and long-term survival. Partial resection results in local recurrence. If the disease metastasizes, chances of survival are quite bleak. A study revealed that 24 dogs treated with surgery with or without radiation were alive for 550 days. Another report indicated that 6 dogs treated with surgery for salivary carcinoma lived for 74 days and all of them developed pulmonary metastasis (when the disease spreads to the lungs) subsequently.