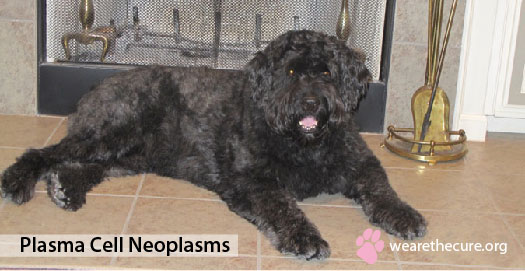 Multiple myeloma accounts for less than 1% of all neoplasms in animals, but among hematopoietic, primary and secondary tumors it consists of 8% and 3.6% respectively. Older dogs are believed to be slightly predisposed. However, no sex predilection has been reported so far.

In cancerous plasma cells, there is an overproduction of a component of immunoglobulin (any of a group of glycoproteins that act as antibodies in the immune system by binding with the specific antigens) called the M component. In multiple myeloma, this M component is found in circulation in the blood and sometimes different organs or bones of the body are also affected.

Although the etiology of multiple myeloma is largely unknown, factors like genetic predispositions, molecular aberrations, viral infections, chronic immune stimulation, and exposure to carcinogens are thought to be risk factors.

The accompanying pathologic conditions may include bone disease, bleeding diathesis (unusual tendency to bleed), hyperviscosity syndrome (symptoms triggered by thickening of the blood), renal disease, hypercalcemia (elevated levels of calcium in the blood), immunodeficiency and cytopenias (reduction in the number of both WBC and RBC) secondary to myelophthisis (bone marrow suppression secondary to marrow infiltration by a tumor).

Bony lysis or diffuse osteoporosis (dissolution of bones due to lack of calcium) is evident on radiographs of one-fourth to two-thirds of dogs. 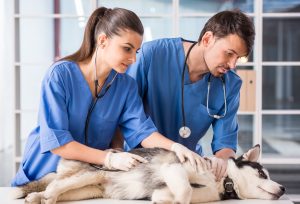 Bleeding diathesis is caused when there is an interference with coagulation. It mainly results from the high viscosity of the blood. However, it can also result from epistaxis (bleeding from the nose) and gingival bleeding (bleeding from the gums). This can also lead to several clinical signs like dementia, depression, seizure activity, coma, ophthalmic abnormalities like dilated and tortuous retinal vessels, retinal hemorrhage and increased cardiac overload (it increases the risk of cardiomyopathy the most).

Funduscopic abnormalities (examination of the fundus of the eye) may reveal retinal hemorrhage, venous dilation with sacculation and tortuosity, retinal detachment and blindness. These consequences result from sludging of blood in small vessels, impaired oxygen and nutrients delivery and coagulation problems.

Renal disease is fairly common in dogs with multiple myeloma. This can result from multiple factors like proteinuria (presence of excess protein in the urine), tumor infiltration into renal tissue, hypercalcemia, amyloidosis (variety of conditions in which amyloid proteins are abnormally deposited in organs), diminished perfusion secondary to hyperviscosity syndrome, dehydration and ascending urinary tract infection.

Hypercalcemia is observed in approximately 15-20% of cases. Death in multiple myeloma mostly occurs due to susceptibility to infection and immunodeficiency. Normocytic (although red blood cells are normal in size they are less in number), normochromic (concentration of hemoglobin is normal within the standard range) and non-regenerative (the bone marrow loses the capacity to produce fresh RBC) anemia are present in approximately two-thirds dogs with multiple myeloma. These factors also result in thrombocytopenia (presence of few platelets in the blood), leukopenia (decrease of white blood cells in the blood) in one-third and one-fourth of dogs approximately.

Cardiac complications result from excessive cardiac overload, and myocardial hypoxia (blood deficiency in the myocardium due to lack of oxygen supply) secondary to hyperviscosity.

There should be a thorough physical examination accompanied by a complete blood count, urine analysis, serum biochemistry profile and platelet count. Other examinations may include serum calcium blood test, serum electrophoresis, and immunoelectrophoresis to assess renal function and also to find out the immunoglobulin category. For detecting proteinuria heat precipitation with electrophoresis of urine is carried out. Bone marrow core biopsy is performed for examining the clustering of plasma cells in the bone marrow because a normal bone marrow contains less than 5% plasma cells. But a bone marrow riddled with myeloma tissue would contain excessive plasma cells.

Thoracic and abdominal radiographs screen for bony lesions if there are any on the skeletal areas. Skeletal radiographs are useful for detecting and determining the extent of osteolytic lesions (‘punched out’ areas of severe bone loss). 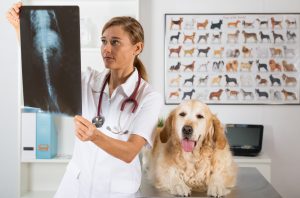 DEXA scans and MRI scans are recommended for marking out the clinical stage of dogs with multiple myeloma and also for documenting osteoporosis.

Because of the complex nature of multiple myeloma surgery, cannot be attempted. So, in most dogs with multiple myeloma chemotherapy is the treatment of choice. Apart from alleviating pain in the bone, it accelerates skeletal healing and also reduces levels of serum immunoglobulins. It has a great prognostic importance. Although myeloma cells cannot be removed completely, some chemotherapeutic drugs have shown positive results. The drug mostly recommended is Melphalan. It is also combined with prednisone sometimes for better results. However, the side effects of melphalan may include myelosuppression, a delayed thrombocytopenia.

A complete blood count, including a platelet count, is recommended bi-weekly for 2 months of therapy and monthly thereafter. But in the event of myelosuppression, the dosage of melphalan has to be altered.

Cyclophosphamide has been used alone or in combination with melphalan in dogs with multiple myeloma. However, there are no reports to indicate its superiority to melphalan therapy. Cyclophosphamide is generally recommended for patients with severe hypercalcemia or widespread systemic involvement (involvement of multiple organs). Because of its minimal effects on thrombocytes (cells that induce blood clotting), it may be administered in patients who have developed thrombocytopenia as a result of prolonged melphalan use.

Another chemotherapeutic agent known as chlorambucil has produced gratifying results in the treatment of IgM macroglobulinemia (a kind of lymphoma that originates in the B-cells).

In the case of hypercalcemia, the treatments may include fluid diureses with or without pharmacologic agents like calcitonin. Moderate hypercalcemia goes into remission 2-3 days after the commencement of melphalan/prednisone chemotherapy. 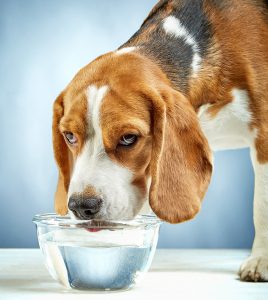 The best treatment for HVS is plasmapheresis (removal, treatment and return of blood plasma from blood circulation). With HVS bleeding diathesis also resolves.

Renal failure is often treated with aggressive fluid therapy in the short-term while in the long-term the aim is to maintain adequate hydration. Secondary urinary tract infections are common for which antimicrobial therapy is suggested. It is very important for the owner to ensure that his dog consumes a sufficient amount of water. In some cases, the owner has to learn how to administer fluid subcutaneously. Regular follow-ups are a must.

For treating relapsed multiple myeloma in dogs that underwent melphalan therapy, doctors resort to a VAD protocol comprising doxorubicin, vincristine and dexamethasone sodium phosphate. Also known as ‘rescue therapy’, it is found to be effective in the initial stages, but its efficacy takes a nose dive shortly afterward. High-dose cyclophosphamide has been investigated as a rescue agent but with a guarded prognosis.

The prognosis is generally good if the tumor can be controlled at an initial stage. The median survival rate has been found to be 540 days. The development of hypercalcemia, proteinuria and extensive bone lysis indicate a guarded prognosis. Due to the complex nature of multiple myeloma, the long-term survival rate is usually poor.

Solitary plasmacytic tumors, similar to multiple myeloma, usually develop from soft tissues (extramedullary plasmacytoma) or bone (solitary osseous plasmacytoma). They account for 2.4% of all canine neoplasms. The most common cutaneous primary sites include mucous membranes of the oral cavity and lips, rectum and the colon, skin of the limbs, head, and ears. Other sites may include the stomach, trachea, esophagus, small intestine, large intestine spleen, genitalia, eyes, uterus and liver. Breeds like American Cocker Spaniel, English Cocker Spaniel, and West Highland White Terrier have a predilection for plasmacytomas. The median age has been estimated between 9-10 years.

Cutaneous and oral extramedullary plasmacytomas are benign lesions that can be managed with local therapy. But the non-cutaneous tumors on the other hand are quite aggressive in nature. The most common metastatic sites for these tumors are the associated lymph nodes. 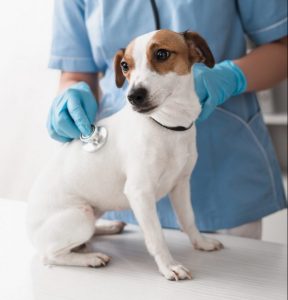 Most of the solitary osseous plasmacytomas aggravate systemic multiple myeloma. The most common sites involved are the zygomatic arch (cheekbone) and the ribs.

Plasmacytic Tumor Symptoms To Look Out For

Cutaneous plasma cell tumors are amenable to surgery and hold a great deal of promise. For solitary osseous plasmacytoma, which results in unstable long bone fracture, or compression of the vertebral body, surgery is recommended in combination with radiotherapy. Solitary extramedullary plasmacytoma of the axial skeleton can be controlled in a similar way. Radiotherapy can be used as a palliative measure for bone pain. However, despite good local tumor control, dogs with osseous extramedullary plasmacytoma eventually develop systemic multiple myeloma. The disease may take a very long time to metastasize. So, unless that happens systemic treatment is not initiated. Restaging of the disease including bone marrow evaluation may be needed if there is any inkling of metastatic involvement.

Tumors that are amenable to surgery like cutaneous and mucocutaneous plasmacytomas, extramedullary plasmacytoma of the alimentary tract and other abdominal organs like the liver and uterus have a good prognosis. According to studies, 9 dogs treated for colorectal plasmacytoma showed a median survival time of 15 months. Metastatic tumors generally develop from non-cutaneous locations. Therefore the site of the primary tumor plays an instrumental role in determining the prognosis.