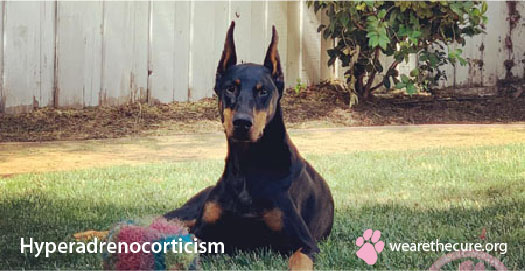 Description– Hyperadrenocorticism or Cushing’s syndrome is the most commonly found disease of an endocrine gland in dogs. It results from a functional pituitary tumor. It is also called corticotroph adenoma and occasionally arises from pars distalis (it comprises the majority of the anterior pituitary and is where the bulk of pituitary hormone is produced) and pars intermedia (the intermediate part that sits between the pars distalis and the posterior pituitary).

Around 80-85% of dogs have pituitary-dependent hyperadrenocorticism (PDH). It mostly occurs in middle aged and older dogs. There is an excessive secretion of the adrenocortotropic hormone (ACTH) that causes adrenal hyperplasia (enzymatic errors of metabolism) and excessive secretion of glucocorticoids (a class of steroid hormones). More than 75% of dogs with PDH weigh less than 20 kg. Poodles Dachshunds, Terriers and German Shepherds are most commonly affected by this disease.

Cases of pituitary carcinoma are mostly unheard of in dogs. In 40-50% of them the tumors are microscopic (microadenoma). In the remaining cases, they appear as a nodule. Only 10-20% of dogs have macroadenoma that is 10mm or larger in diameter. Fifteen to twenty percent of dogs with Cushing’s syndrome have adrenal-dependent hyperadrenocorticism (ADH). In more than 80% of the cases it has been found that adrenal tumors are adenocarcinoma. Adenomas are normally 1- 6mm in diameter. But in case of carcinomas they grow rapidly.

Symptoms– The symptoms are very slow. They range from months to years. They have been identified as polyuria/polydipsia (urge to urinate more frequently/increased levels of thirst), reduced energy levels, pendulous abdominal profile and hair coat (slow re growth of shaved hair) changes.

The adrenocortical carcinomas severely affect the phrenicoabdominal vein, renal vein or renal vena cava. Intravascular invasion can cause death due to intra-abdominal or retroperitoneal hemorrhage (bleeding in the anatomical space in the abdominal cavity behind the peritoneum). The disease also metastasizes in 50% of dogs and spreads to liver, kidneys, ovaries, mesenteric lymph nodes, peritoneal cavity and thyroid gland.

Treatment- Veterinarians conduct complete blood count and biochemistry. Thoracic radiographs are taken to detect bronchial mineralization or pulmonary metastasis which could be a direct corollary of adrenocortical carcinoma. Unlike other types of cancer, ultrasonography here is not a routine test but it might help in differentiating between PDH and ADH. Apart from these, the other tests conducted include urine cortisol:creatinine ratio, ACTH simulation test and low-dose dexamethasone suppression tests.

Adrenalectomy (surgical removal of one or more adrenal glands) is the surgery of choice for dogs with ADH. Earlier, the mortality rate was high peri operatively. But recent studies have shown improvement in the management of life threatening complications like hypocortisolemia, pancreatitis, hemorrhage and pulmonary thromboembolism. Dexamethasone should be given during operation and continued for some time post operatively also. An ACTH-simulation test is performed the next day to evaluate the pituitary-adrenal axis. If the surgery is successful, test results should be low. Mineralocorticoid supplementation is not needed continuously like glucocorticoid supplementation. The latter should not be stopped till the ACTH test results return to within the low normal range. Postoperative monitoring of electrolytes is essential. It is believed that by administering plasma, heparin, and hetastarch during and after operation, the frequency of thromboembolism (formation of a clot in a blood vessel that breaks loose and is carried forward by the blood stream to plug another vessel) is controlled. The prognosis here is quite heartwarming. But in case the disease persists, chemotherapy becomes imminent.

Lysodern ((also known as mitotane, and o,p’-DDD) is very effective for patients with PDH. Initially, veterinarians begin with a dose of 50 mg/kg/day. Approximately 95% of dogs respond withinh 5-9 days of starting the loading dose and almost all within 14 days. Recurrence of clinical signs of hyperadrenocorticism is reported in 50% of cases within first year of starting the maintenance therapy.. If the patients show signs of vomiting, diarrhea, an ACTH stimulation test is conducted. The challenge here is to control the cortisol level. Post ACTH test, it should read 1-5ug/dl. If the goal is achieved, then the dose would now vary between 25-50mg/kg/week. The chances of survival are bright in this case. This is called maintenance therapy. ACTH test should be conducted 1 and 3 months after the maintenance therapy begins. Thereafter, it should be performed every 3 to 4 months or when symptoms occur. Though this is administered to patients with ADH also, it is not very effective in this case. Only 20% of dogs respond as desired within 10 days of starting the loading phase. The remainder require longer induction periods or higher induction doses or both. The dosage is decided depending on the patient’s response during the loading phase. In most of the cases there is a relapse, inducing increased maintenance dosage. At high doses the drug can induce anorexia, vomiting and other clinical signs. Overall median survival is 1 year. Patients with metastasis have a more guarded prognosis although regression of metastatic disease has been reported with o,p’-DDD therapy. Other available treatments for dogs with hyperadrenocorticism are Trilostane, ketoconazole and inhibitors of steroid biosynthesis.

Prognosis– In a very few percentage of dogs afflicted with PDH the tumors take the shape of macroadenomas. In the latter cases, neurological complications develop. To combat this, radiation therapy is applied. But it proves successful only if the complications are mild or moderate. Many cases survive well for several years depending on the pathology present and severity of signs. However, in most cases, animals with pituitary-dependant hyperadrenocorticism have a good prognosis with appropriate treatment. If they are able to survive more than six months after the disease is controlled, they tend to die of causes unrelated to hyperadrenocorticism. Medications may control the disease for 2-4 years. Untreated hyperadrenocorticism is generally a progressive disorder with a poor prognosis.

The outcome for animals with malignant adrenal gland lesions can be good, if the cancer is small and has not spread. Pets with large cancers or adrenal gland tumors with widespread metastases generally have a poor prognosis.