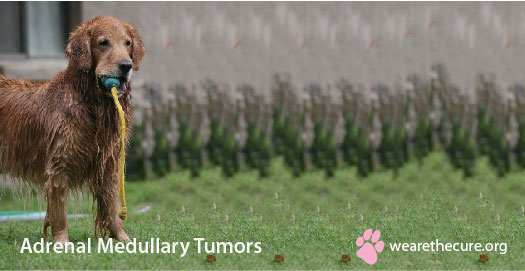 Description – Adrenal medullary tumors are rare and account for 0.01% to 0.1% of all canine neoplasms. But pheochromocytomas are the most common adrenal medullary lesions. They originate from the chromaffin cells (neuroendocrine cells) that secrete cateocholamines (hormones released by the adrenal glands in response to stress) comprising norepinephrine (stress hormone) and epinephrine (stress hormone).

A majority of the canine pheochromocytomas are malignant mostly affecting the adjacent vasculature (arrangement and distribution of blood vessels).  However, metastasis is less common accounting for a mere 20-30%. The most common metastatic sites include liver, spleen and lungs while the less common sites include regional lymph nodes, kidneys, bone, pancreas, peritoneum, brain, spinal cord and heart. Bilateral adrenal gland involvement has been reported in 5% of dogs. Other types of adrenal medullary tumors reported generally include concurrent adrenal medullary tumors and adrenocortical tumors. The median age of affliction with adrenal medullary tumors is 11 years.

Diagnostic techniques – The common diagnostic techniques like complete blood chemistry, chemistry panel and urinanalysis generally do not give any direction. So, doctors resort to other methodologies like thoracic radiographs, abdominal ultrasound scans, ultrasonography, CT and MRI for a definitive diagnosis.

Thoracic radiographs may provide insight into tumor thrombus that may result from cardiomegaly (medical condition in which the heart is enlarged) secondary to concentric hypertrophy (growth of an organ without proper enlargement), or distension of the caudal vena cava (posterior end of the body). There are reports of pulmonary metastasis in 5- 10% of cases.

Abdominal ultrasounds are useful in detecting adrenal mass because in some cases pheochromocytoma is confirmed only after the detection of an adrenal mass.

Treatment – Surgery is the only treatment for dogs with pheochromocytoma. Some common side effects of anesthesia may include hypertension, tachycardia and arrhythmias. Dogs receive phenoxybenzamine, 1-2 weeks prior to surgery. In case the dog is tachycardic, beta blockers (class of medicines used to treat arrhythmias in dogs) like propranolol or atenolol may be given. If the tumor is found too extensive doctors resort to debulking, including removal of tumor thrombi from the vena cava. This helps in controlling the clinical signs by reducing catecholamine levels. However, chemotherapy and radiation therapy still remain under the scope of veterinary research. Around 50% of dogs with adrenal medullary tumors develop concurrent tumors  originating from endocrine glands like pituitary, adrenal cortex, thyroid gland, parathyroid gland and pancreatic beta cells.

Prognosis – In case of metastatic disease the prognosis is poor. But dogs which survive the perioperative period usually have a long-term survival. However, in rare cases metastasis may develop many years after surgery.