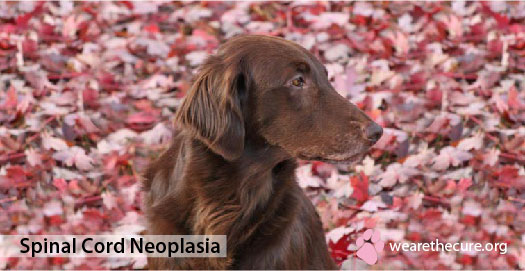 Extradural, intradural-extramedullary and intramedullary lesions account for 50%, 30% and 15% respectively. Normally, spinal cord neoplasms do not originate from the spinal cord. But there are exceptions like meningiomas, astrocytomas, osteosarcomas and lymphomas. Among the primary tumors, meningiomas occur most frequently. They usually originate from the cervical spinal cord (It helps in the movement of neck, upper trunk and arms and provides sensation to these body parts).

The secondary tumors that affect the canine vertebrae mainly consist of adenocarcinomas, hemangiosarcomas and lymphosarcomas. Among the secondary tumors, hemangiosarcoma is the most frequent. Meningiomas and peripheral nerve sheath tumors are the most common primary intradural-extramedullary tumors in dogs. Normally, older dogs are predisposed for such tumors. No sex predilection has been reported so far. However, secondary tumors involving the intradural-extramedullary region of the spinal cord like neuroepithelioma, ependymoma medulloepithelioma, nephroblastoma and spinal cord blastoma are extremely rare. Young dog breeds like German Shepherds and retrievers are predisposed.

However, extradural tumors involving the meninges, spinal nerves, nerve roots, may cause discomfort that might aggravate to extreme spinal hyperesthesia (condition that involves an abnormal increase in the sensitivity of the stimuli to the senses). In the initial stages, neurological deficits may be absent but with the progress of time, movements may be badly affected. However, if there is a swelling in the brachial (relating to arms) or the lumbar (lower back) regions, the dog may face difficulties in holding up of a limb, neurogenic muscular atrophy (wasting of a muscle due to damage to its peripheral nerve supply) and depressed spinal flexes.

However, maximum damage is caused by intramedullary spinal tumors.

Radiography– Radiography which is done under general anesthesia helps the doctor in getting stressed or oblique projections of the entire vertebral column. In case of primary or secondary neoplasia, radiography beomes mandatory because the arch and body of the spinal cord are badly affected resulting in bone lysis (bone dissolution) or new bone formation.

Cerebrospinal fluid analysis- This is one step further. When radiographs fail to provide a definitive diagnosis, doctors go for cerebrospinal fluid (CSF) analysis. This fluid is collected by making a puncture in the lumbar area.

Myelography- Myelography comes into the picture when we need exact information about the location and the extent of the tumor. With the help of myelography you can also make a distinction among extradural, intradural-extramedullary and intramedullary spinal cord tumors.

Advanced Imaging- Computed tomography or magnetic resonance imaging are safe and non-invasive methods that give complete details about the cortical bones (one of the two types of osseous tissues that facilitates bone’s main functions) unlike myelography.

Treatment– The course of treatment depends upon several factors like the location of the tumor and its histologic grade. The immediate goal is to minimize the effects of sustained spinal cord compression. This can be achieved by administering glucocorticoids (a class of steroid hormones). The tumor can be removed completely through surgery also. But if it is not extirpated completely, there is a possible chance of recurrence. Under these circumstances, irradiation is recommended. But the main problem of irradiation is that the spinal cord too has to be irradiated with the same dose as the tumor. This leads to several neurological complications. However, advancement in neurosurgical techniques have improved the outcome in many cases.

Lymphoma of the spinal cord is perhaps the only type of tumor that holds out hope of recovery with radiation and chemotherapy. So, an accurate biopsy is imperative for making a definitive diagnosis. This is done by taking smear from the spinal cord tumors. Sometimes, radiation therapy is applied before chemotherapy for better results.

Prognosis– The prognosis for extradural metastatic neoplasm or vertebral neoplasm is guarded. In some instances where the affected vertebrae is removed, the chances of survival are better. Occasionally, intradural-extramedullary tumors are completely removed. In such cases the prognosis is good. However, reports indicated that intramedullary tumors that were treated with irradiation showed a median survival rate of more than 1