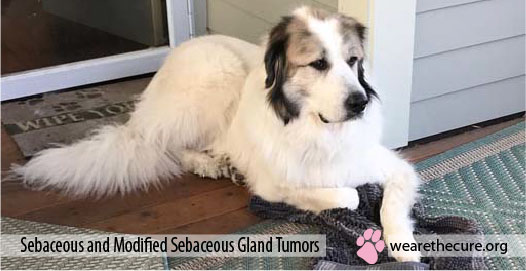 Description – These tumors have a predilection for the head and are generally exophytic (growing outwards). But sometimes they extend into the dermis and may involve the subcutaneous tissues like the sebaceous adenomas. There are multiple lobules and at the edge of the lobules, there is a reserve of small basophilic reserve cells (when a cruel disease strikes reserve cells come to the rescue of the dog) which finally differentiate into sebocytes (sebum-producing cells that form the sebaceous glands).

Sebaceous gland epitheliomas are usually regarded as a variant of sebaceous gland tumors. They are composed primarily of basal progenitor cells (they have the capacity to differentiate into a specific type of cell) rather than mature sebocytes. It is considered to be a low-grade malignancy.

Sebaceous ductal adenomas consist of a large number of variably sized ducts that contain keratin (a tough, insoluble protein substance that is the chief structural constituent of hair, nails) and some sebum. The number of reserve cells and sebocytes seen in these tumors are few. They often have irregular lobules that extend into the deep dermis. 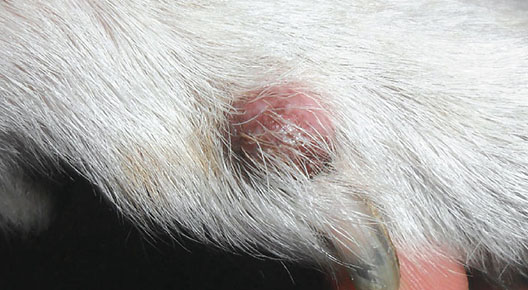 Cause – The exact etiology of sebaceous gland tumors is largely unknown but hormonal dysfunction could be a possible reason.

Symptoms – These tumors present themselves as elevated, nodular masses and are usually 2-5 mm in diameter. Some tumors like the sebaceous epitheliomas may appear black or brown due to the presence of melanocytes inside them. But the remaining tumors often appear as yellowish or tan on cut section and may exhibit alopecia, hyperpigmentation, and ulceration with secondary infection. They may be itchy and inflamed also.

Diagnosis – All the tumors may look alike but for accurate examination, the vet often relies on fine-needle aspiration with cytology followed by histopathology and tissue biopsy.

Treatment – These tumors are amenable to surgical excision because of their benign nature. But sebaceous epitheliomas may recur twice or thrice after surgery.

Prognosis – These tumors are usually curative on surgical extirpation.

Description – Malignant tumors of the sebaceous glands are rare in dogs and account for only 2% of all sebaceous gland neoplasms. Due to their multilobulated appearance, they can be easily distinguished from liposarcoma (malignant tumor arising in the fat cells in deep soft tissue). They are generally found on the head and neck in dogs. These tumors are locally infiltrative but rarely metastasize. Regional lymph nodes may be affected at an advanced stage of the disease.

Dogs between 9-13 years are at an increased risk and the genetically predisposed breeds may include Cocker Spaniel, West Highland White Terrier, Scottish Terrier, and Siberian Husky. However, no gender predilection has been reported so far.

Symptoms – Sebaceous gland carcinomas have an elevated wart-like appearance and are often exophytic. They show ulceration and cause inflammation of the surrounding skin.

Treatment – Sebaceous gland carcinomas are amenable to wide surgical excision. However, if the tumors are found to be invasive, vets may resort to radiation therapy.

Prognosis – Sebaceous gland carcinomas usually have a guarded prognosis because of the high possibility of recurrence.

Description – Meibomian glands are a special kind of sebaceous glands located on the periphery of the eyelid. They are responsible for the supply of sebum which prevents the tear film from evaporating. Meibomian tumors are slow-growing and may contain an excessive amount of melanin. These lesions too can be classified like sebaceous gland tumors. However, these tumors are rare in dogs.

Meibomian carcinoma is uncommon in dogs. But they can be infiltrative and metastases via lymphatics to regional lymph nodes have been reported.

The peak incidence is between 6 and 11 and the genetically predisposed breeds include Gordon Setter, Samoyed, Standard Poodle, Shih Tzu, Siberian Husky, West Highland White Terrier, and Labrador Retriever. However, so sex predilection has been reported so far.

Symptoms – Although most of them are non-malignant in nature, they generally do not metastasize. But they can cause extreme discomfort and if the tumor grows too large, it can even cause difficulties during blinking.

Treatment – Meibomian gland tumors are amenable to wide surgical excision. But sometimes cryosurgery (application of extreme cold to destroy diseased or abnormal tissues) may also be used. After surgery, you may notice blood in your dog’s tears for a couple of days. The wound takes around 3 weeks to heal but the hair around the site will turn white permanently.

Prognosis – The tumors don’t recur often. But the first 6 months after surgery are crucial during which constant monitoring is a must.

Description – Hepatoid glands are modified sebaceous glands found in skin around the anus of dogs. They are also known as circumanal glands. They derive their name from hepatocytes which are responsible for protein storage, protein synthesis and transformation of carbohydrates, synthesis of cholesterols, the transformation of phospholipids, detoxification, modification, and excretion of endogenous and exogenous substances. The cells of hepatoid glands resemble hepatocytes morphologically. These glands are found on the perianal region, on the dorsal and ventral aspect of the tail, in the parapreputial area in males (near the exocrine glands in front of the genitals), in the abdominal mammary region in females, on the posterior region of the hindlimbs, and on the midline of the back and thorax. Sometimes, they are found elsewhere in the body also.

Hepatoid gland adenomas are well encapsulated, multilobulated, subcutaneous masses that are benign in nature. But hepatoid gland epithelioma is poorly differentiated due to its low-grade malignant nature.

Dogs between 8-13 years are predisposed and the breeds that are at increased risk include Siberian Husky, Samoyed, Pekinese, Cock-a-poo, Cocker Spaniel, Britanny Spaniel, Lhasa Apso, Shih Tzu, Mixed Breed, and Beagle. However, intact males have a higher incidence compared to their female counterparts.

Symptoms – These tumors may be found as solitary or multiple intra-dermal masses. They vary from 0.5 to 5 cm in diameter and show ulceration, alopecia and desquamation. They appear pale brown on cut section.

Treatment – Surgery is the treatment of choice for hepatoid gland adenomas and hepatoid epitheliomas. However, for intact male dogs, castration, (removal of the male genitals) is recommended at the time of surgery. Although chances of recurrence following surgical extirpation are minimal, fresh tumors arising from adjacent tissues are very often mistaken for recurrent hepatoid gland adenomas and epitheliomas. But hyperplastic hepatoid glands, close to the surgical margins may get transformed into new tumors at the previous site.

Description – This is a malignant tumor found on the perianal, parapreputial, and tail skin. Dogs between 8-12 years are predisposed and breeds that are at increased risk may include Siberian Husky, Shih Tzu, and Mixed Breed. Intact males have a higher predilection compared to their female counterparts.

These tumors have a variable metastatic potential and often spread via lymphatics to the sacral and iliac lymph nodes.

Treatment – Doctors opt for surgery followed by subsequent radiation. But hepatoid gland carcinoma is non-amendable to castration or estrogen therapy.

Prognosis – The prognosis is usually guarded in the case of hepatoid gland carcinoma.

Tumors in Domestic Animals – Donald J. Meuten, DVM, PhD, is a professor of pathology in the Department of Microbiology, Pathology, and Parasitology at the College of Veterinary Medicine, North Carolina State University, Raleigh