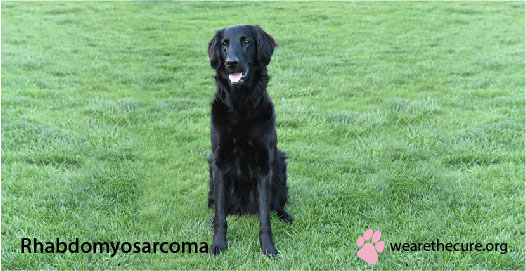 Description– Rhabdomyosarcomas are soft tissue sarcomas which originate frequently in the striated muscles (form of fibers that are combined into parallel fibers) of the body like the cardiac and the skeletal. The cells from which they develop are called myoblasts. Rhabdomyosarcomas occur mostly in the oral cavity, larynx, pharynx, gingiva (gums), greater omentum, tongue, urethra, myocardium, and the urinary bladder. So, on the basis of their location, rhabdomyosarcomas have been classified into embryonal, botryoid, alveolar and pleomorphic. Although carcinomatosis (wide spread to distant organs) is uncommon here, they may spread to organs like the spleen, lungs, liver, kidneys and the adrenal glands. Rhabdomyosarcomas are mostly found in young animals. Although rhabdomyosarcoma is the most common type of tumor originating from the skeletal muscles, it accounts for less than 1% of all reported malignancies in dogs.

Laryngeal rhabdomyosarcoma is fairly common. The victims are normally young animals. However, older animals can also be affected. There is no breed predilection. These neoplasms occur as masses that protrude into the lumen of the larynx. They are locally infiltrative. Necrosis, hemorrhage and hemosiderosis (iron overload disorder) are common features.

But on the other hand cardiac rhabdomyosarcoma is extremely rare. The clinical signs may include cardiac dysfunction, syncope (loss of consciousness), dyspnea, lethargy, stridor (high pitched sound resulting from turbulent air flow in the upper airway) and dysphonia (medical term for disorders of the voice).

They manifest themselves as white or tan fleshy masses. In some cases they were seen at the apex of the heart with the cystic masses originating in the right ventricle, extending into the right ventricle and finally into the aorta (largest blood vessel in the body).

Botryoid Rhabdomyosarcoma– It is most commonly found in the urinary bladder of a dog. However, this tumor is quite rare. Young and large breed dogs are over represented in this type of a tumor like the Saint Bernard. The average age group for this type of tumor is 1.7 years.

The term ‘botryoid’ (having many rounded protuberances like that of grapes) has its origin in the polypoid (resembling a polyp) mass that extends into the lumen (cavity or channel within a tubular structure). In certain cases the tumor projects into the body of the bladder and fills the urethra (tube which connects the urinary bladder to the outside body). In some cases the mucosal surface is ulcerated. Botryoid rhabdomyosarcoma  presents itself as white or tan lesions. Hemorrhage and necrosis are common features of the lesions. In dogs suffering from botryoid rhabdomyosarcoma, hypertrophic osteopathy is a common problem (bone disease secondary to disease in the lungs).

Alveolar rhabdomyosarcoma– It mostly occurs in the maxilofacial (affecting the jaws and the face) or abdominal region especially the omentum (different components of the peritoneum) in dogs. They usually manifest themselves as white, yellow gray, red-brown or fish flesh in color. Necrosis and hemorrhage are common features.

Pleomorphic rhabdomyosarcoma– This is a very common tumor affecting animals. There is so limited information available on this type of cancer that we very often draw comparisons from human oncology. These tumors manifest themselves as pale, white, tan or fleshy masses. Reports suggest they frequently metastasize to distant organs of
the body.

Treatment– Surgical extirpation is the treatment of choice for rhabdomyosarcoma depending upon the location of the tumor and the rate of metastasis. Radiation is also used to treat primary tumor. But for distant metastasis, chemotherapy is used, the standard protocol for which consists of medicines like vincristine, cyclophosphamide
and doxorubicin.

Prognosis– In case of metastasis, the prognosis is usually guarded. But dogs treated for rhabdomyosarcoma normally have a long-term survival rate.

Thank you for utilizing our Canine Cancer Library. Please help us keep this ever evolving resource as current and informative as possible with a donation.
References

Tumors in Domestic Animals– Donald J. Meuten, DVM, PhD, is a professor of pathology in the Department of Microbiology, Pathology, and Parasitology at the College of Veterinary Medicine, North Carolina State University, Raleigh

Cancer in Cats and Dogs: Medical and Surgical Management– Morrison Wallace B