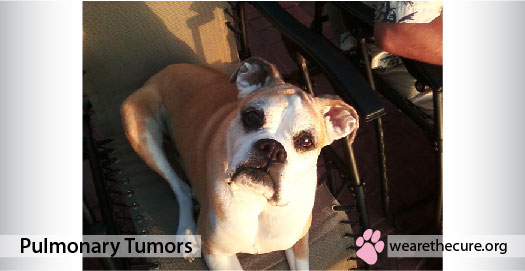 Description — Primary lung cancer may arise from any part of the lung but neoplasm of the conducting airways or alveolar parenchyma (functional part of the lungs consisting of the alveoli) are the most common. It accounts for 1% of all neoplasms reported in dogs. Secondary metastasis to the lungs is more common than primary canine neoplasm.

Also called pulmonary tumors they have been classified into bronchogenic, bronchial gland, or bronchioalveolar according to the site of their location. In humans, tumors of the large airways are frequent, whereas in dogs neoplasm of the bronchioalveolar region are more predominant. Tumors originating from the large airways are of epithelial origin whereas those arising from the parenchyma are of peripheral origin.

Tumors of the large airway generally grow near the hilus (a depression or fissure where vessels or nerves or ducts enter a bodily organ) and are more proliferative in nature. They usually present themselves as solitary, large masses that have a smaller metastatic foci. Although rare, primary tumors are mostly concentrated in the right lobes with an additional susceptibility for the caudal lung (near the tail of the lung). But, bronchioalveolar neoplasms on the other hand, have multifocal tumors and are found in one or more lung lobes. They usually develop from the periphery of the lung (outer part of the lung).

Primary tumors are mostly carcinomas with a predominance for adenocarcinoma. Based on the site of their location, adenocarcinomas have been classified into bronchial, bronchioalveolar, or alveolar carcinoma. Bronchioalveolar tumors on the other hand, can appear multi-centric (having one or more centers). However, a rare form of diffuse bronchioalveolar carcinoma has been reported in a dog. Carcinomas can be either differentiated or undifferentiated. Pulmonary carcinomas metastasize through lymphatic routes, airways, hematogenously (through blood) or transpleurally (through the pleura) to other sites in the lung and hilar lymph nodes (lymph nodes in the hilum found at the junction of each lung and its bronchi). In both dogs and humans, pulmonary carcinoma tends to metastasize to the central nervous system (CNS). Benign tumors, squamous cell carcinoma and primary sarcomas of the lungs are rarely found in dogs. But squamous cell carcinomas are highly aggressive for they usually metastasize in 90% of the cases. Similarly undifferentiated adenocarcinomas also spread in more than 50% of the cases.

According to the reports, average age of dogs with primary lung tumors has been found to be 10.8 years. However, anaplastic carcinomas (absence of epithelial structural differentiation) tend to occur in younger dogs. No sex predilection has been reported in dogs with pulmonary tumors. Breeds at an increased risk for primary pulmonary epithelial neoplasia may include the boxer, Doberman pinscher, Australian shepherd, Irish setter and Bernese mountain dog.

Causes —  Some of the contributing factors to pulmonary tumors in dogs include plutonium and other forms of radiation.

Symptoms — Some of the clinical signs for pulmonary tumors may include non-productive cough, dyspnea (shortness of breath), lethargy, weight loss, ill-thrift (failure to grow), inappetence (lack of appetite) and intolerance to exercise.

Paraneoplastic syndromes associated with primary pulmonary tumors include hypertrophic osteopathy (bone disease secondary to infection in the lungs) and hypercalcemia (high calcium level in the blood). Lameness due to skeletal metastasis can be seen sometimes. Regurgitation (it is the controlled flow of stomach contents back into the esophagus and mouth) is observed in case of esophageal involvement.

Other clinical abnormalities may include pleural effusion (accumulation of fluid in the pleural cavity) and neutrophilic leukocytosis (elevated number of white blood cells in the blood).

Radiographs are essential because they indicate a solitary spherical mass if there is any. If the lesion happens to be malignant, it has a cavitary appearance on radiographs. Primary lesions can be seen on the caudal lung lobes through radiographs. Sometimes, multiple and miliary (small skin lesions) tumors are also seen. However, hilar lymphadenopathy (enlargement of the tracheobronchial and pulmonary lymph nodes) cannot be seen through radiographs. It also helps in detecting pleural effusion.

Imaging techniques like MRI and CT scan are useful in determining the actual stage, the rate of metastasis or lymph node enlargement.

Bronchoscopy is a technique which helps the medical practitioner to view the inside of the airways for lesions.

Some vets prefer to get samples from the windpipe and bronchi with the help of tracheal washes. However, this procedure is not of much diagnostic importance except in diffuse lymphoma.

Thoracoscopy or CT scan (examination involving internal inspection of the pleural cavity) may be beneficial in detecting the cause of pleural effusions because malignant effusions have a guarded prognosis.

Treatment — Pulmonary carcinomas are best managed with surgical extirpation. If the solitary mass is confined to the thorax, thoracotomy (incision is made in the chest to gain access to the thoracic organs like chest, lungs, esophagus, or thoracic aorta) is performed. In general surgical removal by lobectomy (surgical excision of the lobe of the lung) is performed for removing small solitary lesions. For removing larger lesions and for better inspection of the lobes, doctors resort to midline sternotomy (a type of incision in the center of the chest, that separates the chest bone to allow access to the heart). Sometimes, partial lobectomy is performed for peripherally tumors located.

Other therapeutical methods consist of chemotherapy and irradiation. Newer irradiation method called intensity-modulated-radiation-therapy (IMRT) has been used on a handful of dogs with lung tumors. In a few cases multi drug chemotherapy with vindesine, cisplastin, doxorubicin or mitoxantrone has shown some benefits. Inhalation chemotherapy has been used on dogs with assessable lung cancer and also for patients in an adjuvant setting (surgery followed by chemotherapy). Although results are not very encouraging some breakthrough has been definitely achieved.

Systemic chemotherapy, intrapleural chemotherapy or both with combinations of cisplastin, carboplatin, mitoxantrone, is used for treating malignant pleural effusions.

However, metastatic cancer is treatable only on rare occasions.

Tumors in Domestic Animals– Donald J. Meuten, DVM, PhD, is a professor of pathology in the Department of Microbiology, Pathology, and Parasitology at the College of Veterinary Medicine, North Carolina State University, Raleigh