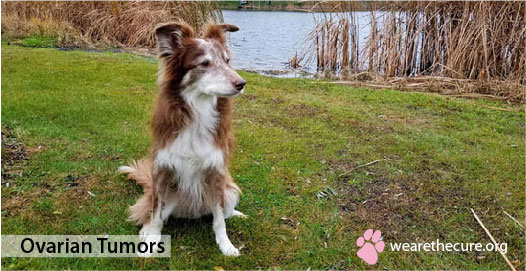 Description – Ovarian tumors are almost unheard of in dogs. However, they can be categorized based on their cell origin. They are epithelial tumors, germ cell tumors and sex cord stromal cell tumors. Epithelial tumors and sex cord stromal tumors together account for 80-90% of all canine ovarian tumors. Mesenchymal tumors (originate from cells surrounding the skin, like fat, connective tissues, blood vessels and nerves) like primary ovarian hemangiosarcoma and fibromas have also been reported.

The peak incidence of epithelial tumors is between 4 to 15 years. Some reports suggested a predisposition among Pointers for epithelial tumors. Teratomas, the most commonly identified germ cell tumors have been reported in dogs between 20 months to 9 years. Sex cord stromal cell tumors like granulosa cell tumor has been reported in dogs between 14 months to 16 years. Some studies have found breeds like Boxers, German Shepherds, Yorkshire Terriers, English Bulldogs to be at an increased risk for granulosa-theca cell tumors, a type of sex cord stromal cell tumor.

Except for teratomas, ovarian neoplasms are found in middle aged to older animals.

Papillary adenomas and adenocarcinomas are bilaterally symmetric but they can be distinguished based on parameters like size, mitotic index (it is a measure for the infiltration status of a cell population), proliferation into the stroma of the ovary (a soft tissue consisting of blood vessels) and extension into the adjacent peritoneum (forms the lining of the abdominal cavity). Another significant indicator of papillary adenocarcinoma is the formation of malignant pleural effusion (accumulation of fluid in the peritoneal cavity). It has been found to metastasize to the renal and paraaortic lymph nodes (group of lymph nodes that lie in front of the lumbar vertebral bodies near the aorta), omentum (stores fat and a stress hormone called cortisol), liver and lungs.

Cystadenomas develop from the rete ovarii (it is a structure formed from the primary sex cords in females). They consist of multiple thin walled cysts.

Carcinoma is usually a malignant tumor that originates in the glandular cells (cells in the lining surfaces of the body). It is called “undifferentiated” when the tumour cells have no similarity to normal glandular cells. These cancers are quite aggressive in nature. Basically, a vet pathologist describes a neoplasm as ‘undifferentiated’ when he is unable to determine what type of embryonic cell the cancer originated from.

Germ Cell Tumors
Germ cell tumors comprise 6 to 12% of all canine ovarian neoplasms. Based on their primordial origin they have been divided into dysgerminomas, teratomas and teratocarcinomas.

Dysgerminomas originate from undifferentiated germ cells and have a metastatic potential of 10 to 30%. The common metastatic sites are abdominal lymph nodes, liver, kidney, omentum, pancreas and adrenal glands.

Granulosa cell tumors account for 50% of all canine ovarian neoplasms. They are firm, lobulated and consist of multiple cysts. These lesions usually grow very large and have a 20% metastatic potential. The common metastatic sites include sublumbar lymph nodes, liver, pancreas, lungs. Peritoneal carcinomatosis (extensive, widespread metastasis of cancerous tumors throughout the body) has also been reported.

Thecomas are non-malignant tumors. Leuteomas are almost unheard of in dogs but they are benign.

Tumor like conditions and metastatic involvement
As because ovaries are breeding ground for tumors, it is very important to distinguish between the malignant and benign lesions. Conditions like ovarian cysts and paraovarian cysts occur frequently in dogs. Ovarian cysts which usually grow to a very large size are often confused with a neoplastic disease. Paraovarian cysts on the other hand originate from the mesonephric tubules (genital ridges).

There have been reports of metastasis to the ovary in cases of mammary, intestinal, pancreatic carcinoma and lymphoma.

Symptoms – Ovarian tumors like epithelial tumors, granulosa cell tumors, dysgerminomas, teratomas and germ cell tumors are usually asymptomatic unless they grow very large in size. In such cases the clinical signs may include malignant ascites (accumulation of carcinogenic fluid in the abdomen) and pleural effusions (in case of  thoracic metastasis). However, in case of germ cell tumors there is also evidence of hormonal dysfunction.

In case of sex cord stromal tumors there is an overproduction of steroid hormones like estrogen and progesterone. There may be vulvar enlargement, sanguineous vulvar discharge (red discharge from the vulva), persistent estrus, alopecia (loss of hair from the body or head) and aplastic pancytopenia (it is a condition in which the red blood cells are not replenished by the bone marrow) due to excessive estrogen in the body.

On the other hand, overproduction of progesterone may result in cystic endometrial hyperplasia/pyometra complex (a condition in which there is an excessive infiltration of cells of the endometrium). In one study a dog afflicted with luteoma, a kind of steroid cell tumor showed symptoms of hyperadrenocorticism.

Diagnostic techniques and work-ups – The diagnostic work-ups may consist of ultrasonography, intravenous pyelography, thoracic radiographs, cytologic evaluation of abdominal or pleural effusions and transabdominal needle biopsies of the ovary.

Ultrasonography helps in establishing the size of the tumors. Small lesions can be easily identified as benign tumors but the bigger ones usually turn out be cancerous overgrowths. Well differentiated cystic masses are non-malignant in nature.

For differentiating ovarian masses from renal masses intravenous pyelography is performed. It is a test to X-ray the urinary system comprising kidneys, ureters and the urinary bladder.

By evaluating the abdominal or pleural fluid cytologically a definitive diagnosis can be obtained.

The evidence of calcification through radiography points to a teratoma. However, histopathological examination of the resected tissue is mandatory. Thoracic radiographs help in establishing metastasis if there is any.

Treatment – Ovarian tumors are generally treated with ovariohysterectomy (complete removal of female reproductive organs). However, some doctors say that oophorectomy (removal of the ovary or ovaries) alone is sufficient. There have been reports of successful palliation with chemotherapy. However, no standard chemotherapeutic protocol has been established. In some cases intracavitary administration of cisplastin has proved rewarding in controlling malignant effusions.

Prognosis – There is very limited data available on the prognostic outcome of canine ovarian tumors. But according to some reports, dysgerminomas and teratomas treated with surgery showed a median survival time of 4 years and 6 years respectively.