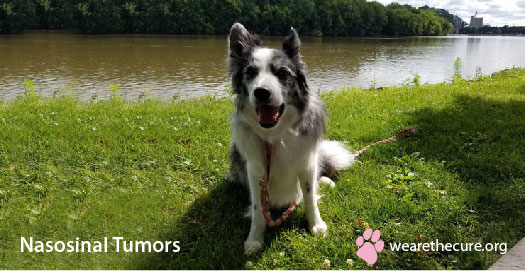 Description – Tumors of the nasal cavity and paranasal sinuses consist of 1% of all canine neoplasms. The intranasal lesions mostly manifest themselves as adenocarcinoma, squamous cell carcinoma and undifferentiated carcinoma. The remaining, however, comprise fibrosarcoma, chondrosarcoma, osteosarcoma and undifferentiated sarcoma. Among them carcinomas and sarcomas are the most aggressive. At the time of diagnosis the rate of metastasis is usually low but at the time of death it is around 40% to 50%. The common metastatic sites are the regional lymph nodes and the lungs whereas the less common sites include the bones, kidneys, liver, skin and brain.

There are also other rare tumors like lymphoma, mast cell tumors and transmissible venereal cancer. Other  malignant tumors reported in dogs comprise hemangiosarcoma, neuroendocrine carcinoma, nerve sheath tumor, fibrous histiocytoma, rhabdomyosarcoma and leimyosarcoma. Benign tumors like polyps and fibromas too have been found.

The average age of dogs with nasosinal tumors is 10 years. A predilection has been reported among medium and large breeds.

Causes – The etiology of nasosinal tumors is largely unknown but some reports suggest that animals living in urban areas are at an increased risk. This is primarily due to the nasal filtering of pollutants. Exposure to passive smoking and fossil fuel combustion products like those produced by coal or kerosene heaters may accentuate the risk of this type of cancer.

Symptoms – Some of the most common clinical signs may include epistaxis (bloody nasal discharge), mucopurulent discharge (nasal discharge containing mucous and pus), facial deformity from bone erosion and subcutaneous extension of the tumor, sneezing, dyspnea (shortness of breath) or stertorous breathing (harsh noisy breathing), exophthalmus (abnormal protrusion of the eye) and ocular discharge due to obstruction of the nasolacrimal duct (carries tears from the lacrimal sac into the nasal cavity).

On rare occasions animals with tumors involving the caudal region of the nasal cavity may have neurological signs including seizures, behavioral changes, paresis (partial loss of movement), circling and obtundation (dog that does not have full mental capacity).

Biopsy entails some amount of bleeding during the procedure. So, it is very important to rule out clotting disorders, platelet count, hematuria (presence of blood in the urine), retinal hemorrhage or petechial hemorrhages (tiny red spot in the eye caused by obstruction of airways) with the help of a clotting profile.

CT scan helps in determining whether the tumor is a neoplasm, extent of proliferation, localization of nasal cavity abnormalities and possible tumor extension into the cranial vault (space of the skull). It is also helpful in optimizing the radiation dose.

Nasal radiography is a reliable and less expensive method of evaluating the tumor further.

Next, is tissue biopsy which can be obtained by anaesthetizing the patient.

If neurological signs exist, a sample of cerebrospinal fluid can be obtained that helps in  determining if the disease has metastasized into the dura or further. Increased CSF pressure and protein suggest brain involvement.

Treatment – By the time nasal carcinoma is detected, the disease has already become highly infiltrative. The degenerative nature of the disease and its critical location of the tumor near the brain and eyes renders it non-amenable to treatment and makes surgery impossible. However, rhinotomy (surgical procedure in which incision is made into the nose) has been attempted in some cases resulting in acute and chronic morbidity. So, radiation therapy using high-energy mega voltage equipment is the only treatment of choice for nasosinal tumors. It covers the entire nasal cavity, including, bone.

Sometimes the side effects of radiation may set in late. But they can be even more dangerous than the acute ones. These may include cataracts (cloud that develops in the crystalline lens of the eye), keratitis (condition in which the cornea of the eye becomes inflamed), atrophy (wasting away of the part of the body), keratoconjunctivitis, anterior uvea, hemorrhage, degeneration, brain necrosis (brain death), seizures, optic nerve degeneration, osteonecrosis (bone collapse) and fibrosis (development of excess fibrous connective tissue in an organ). Some complications develop late after therapy and are generally non-treatable.

1. In a group of dogs treated with irradiation prior to surgery followed by surgical exenteration (removal of entire contents of an organ) of residual or recurrent disease, the median survival time was found to be 47 months. However, there have been late side effects like rhinitis, osteomyelitis (infection of bone or bone marrow) and fistula (connection between a vessel, organ, intestine and another structure) formation.

2. Another study has shown that low-dose cisplastin combined with full-course radiotherapy generated a median survival time of 474 days.

3. Helical tomotherapy has been investigated as a novel form of radiation that integrates IMRT (integrated modulated radiation therapy) and helical CT. In most of the cases it has been observed that normal tissues have a limited tolerance to radiation which results in toxicity. Preliminary results suggest that IMRT/helical tomotherapy reduced the dose to the surrounding normal tissues in a small series of dogs.

4. A coarse fraction, palliative radiotherapy protocol has been investigated on a group of dogs with no evidence of metastasis. However, radiation related side effects like alopecia (baldness), erythema (redness of the skin), conjunctivitis (inflammation of the conjunctiva of the eye) and mucositis have been reported.

5. Cisplastin chemotherapy has been found beneficial in a couple of cases. Although remission of clinical signs was noticed, the median survival time was found to be 5 months. A combination chemotherapy protocol of doxorobucin, carboplatin, and oral piroxicam has been evaluated on 8 dogs with 75% success rate, including 4 complete remissions.

Other therapeutic approaches investigated in the treatment of nasosinal tumors include brachytherapy (placing a radioactive material directly into the tumor), immunotherapy (stimulate the immune system), cryotherapy (use of cold temperature to remove heat from a body part), photodynamic therapy (uses drug and a particular type of light) and cryosurgery (application of cold to destroy diseased tissues) with varying results. However, the exorbitant costs of treatment renders regular follow ups impossible.