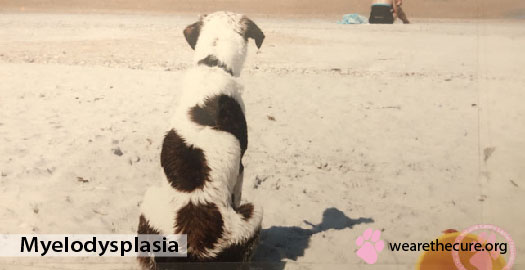 Description – Myeloproliferative diseases (MPDs) are a group of neoplastic ailments originating in the bone marrow. These abnormalities result from an unregulated growth of hematopoietic stem cells (multipotent stem cells that give rise to all types of blood cells). In these type of conditions although the cells grow rapidly there is an impaired  maturation and function leading to reduction of normal hematopoiesis (formation of blood cellular components) and destruction of other tissues. However, in dogs they are found 10 times less frequently than lymphoproliferative (condition in which lymphocytes are produced in excessive quantities) diseases. There is no age, breed or gender predilection.

The differentiation of hematopoietic stem cells depends upon several regulatory growth factors called colony-stimulating factors (CSFs). It is these clonal disorders in the bone marrow that actually lead to myeloaplasia (low count of all blood cell lines like red blood cells, white blood cells and platelets), myelodysplasia (group of disorders in which the bone marrow does not function properly and produces insufficient number of blood cells) and myeloproliferation.

MPDs fall into 2 categories — acute myeloid leukemia and chronic myeloproliferative diseases. The uncontrolled growth of cells affects maturation and this in turn leads to the accumulation of poorly differentiated cells. These disorders were earlier referred to as acute MPDs or acute non-lymphocytic leukemias but now they have been brought under the ambit of acute myeloid leukemia.

Chronic myeloproliferative disorders are also characterized by unregulated proliferation of cells that lead to the accumulation of differentiated cells. They are manifested as polycythemia vera (production of too many red blood cells), chronic myelogenous leukemia, thrombocythemia (production of too many platelets in the bone marrow). In leukemia there is a decreased number of circulating normal cells. The process by which neoplastic cells displace normal hematopoietic cells is called myelophthisis.

Acute Myeloid Leukemia
Acute myeloid leukemia occurs suddenly and is therefore much more aggressive than its chronic counterpart. It occur less frequently in dogs and is characterized by the infiltration of cells in the bone marrow without maturation. This eventually leads to an overproduction of cells in the peripheral blood. The affected organs may include spleen, liver, lymph nodes, tonsils, kidneys, heart and central nervous system. Acute myeloid leukemia is usually manifested as anemia, neutropenia (characterized by a low count of a particular type of white blood cells called neutrophils) and thrombocytopenia (presence of relatively low platelets in dogs).

Polycythemia Vera
This condition is marked by an overproduction of RBCs. Although it occurs less frequently in dogs, middle aged ones are predisposed. No breed or gender predilection has been reported so far. The disease is also characterized by an elevated RBC count and hemoglobin concentration.

Chronic myelogenous leukemia (CML)
This is characterized by an elevated neutrophilic series. They accumulate in the bone marrow and peripheral blood and also attack other organs. The peripheral blood is predominant with both mature neutrophils (most common type of white blood cells) and immature neutrophils. The basophilic and eosonophilic counts are also found to be increased. Other conditions may include anemia and thrombocytopenia. However, CML should be distinguished from severe neutrophilic leukocytosis’ (condition in which all white blood cells are affected) or ‘leukemoid reactions’ (elevated white blood cell count that is a physiologic reaction to stress or infection) which are caused due to immune-related diseases.

Basophilic and Eosonophilic leukemia
Basophilic leukemia is characterized by an elevated WBC count. There is a proliferation of basophils (part of the immune system that protect the body) in the bone marrow and the peripheral blood. Hepastosplenomegaly (simultaneous enlargement of both liver and spleen), lymphadenopathy (inflammation of the lymph nodes) and thrombocytosis (elevated platelet count) may be present. All these dogs have been found to be anemic. However, the incidence of basophilic leukemia is under scrutiny in veterinarian literature.

Essential thrombocythemia
Essential thrombocythemia has been reported very sparsely in dogs. In one study, a dog was reported to have an elevated number of megakaryocytes in the bone marrow. But they were not found in the peripheral blood. Other conditions included splenomegaly, gastrointestinal bleeding and elevated number of circulating basophils.

In a more recent report a dog was diagnosed with primary thrombocytosis. But it was found to have progressed to chronic myelogenous leukemia later on. In some reports it was found that essential thrombocythemia is usually accompanied by microcytic hypochromic anemias (anemia in which the red blood cells or erythrocytes are paler than normal).

Other Bone Marrow Disorders
Myelofibrosis
Unlike humans in dogs myelofibrosis (disorder of the bone marrow where the marrow undergoes fibrosis where there is an excessive development of connective tissue in an organ) occurs secondary to MPDs, radiation damage and congenital hemolytic anemias (accelerated destruction of red blood cells due to an inherited defect). Sometimes conditions like ehrlichiosis (tick-borne bacterial infection), septicemia (serious medical condition characterized by inflammation of the whole body), drug toxicity bring about concurrent bone marrow necrosis (premature death of cells and living tissue). Myeloid metaplasia (condition characterized by anemia, enlargement of the spleen, presence of nucleated blood cells, immature granulocytes in the blood) has been found to occur in the liver, spleen and lungs. However, extramedullary hematopoiesis (formation of blood cellular components outside the medulla of the bone) fails to arrest pancytopenia (reduction of red blood cells, white blood cells and platelets) which develops eventually.

Myelodysplastic Syndrome
Myelodysplastic syndromes are a diverse group of hematological disorders characterized by ineffective production of myeloid blood cells. It eventually leads to acute myelogenous leukemia. In dogs however, this syndrome is extremely rare. The hematologic abnormalities include anemia, neutropenia, thrombocytopenia, macrocytic erythrocytes (erythrocytes that are larger than normal) and metarubricytosis (in such cases, the appearance of nucleated red blood cells are only mildly elevated accompanied by a marked reticulocytosis, indicating that the bone marrow is responding to a sudden increased demand for erythrocyte production). Myelodysplasia is also refereed to as a pre neoplastic syndrome for leukemia. Hence, it is sometimes called preleukemia.

Symptoms – The clinical signs may include lethargy, inappetance (lack of appetite), weight loss, emaciation (become extremely thin), pallor (unnatural paleness), petechiation (condition in which there is a purplish spot on the surface), persistent fever, polydipsia (increased thirst), hepatosplenomegaly. In occasional cases symptoms like lymphadenopathy, enlarged tonsils, shifting lameness in legs, ocular tumors and recurrent infections are also seen. Myeloproliferative diseases can also be accompanied by occasional vomiting, diarrhea, dyspnea (shortness of breath) and other neurological deficits including disorientation, ataxia (lack of muscle coordination) and seizures. Sometimes erythema (redness of the skin) is noticed in such patients due to the increased RBC mass.

Apart from the presence of neoplastic cells in the peripheral blood other anomalies like decrease in the number of normal cells, occasional nucleated RBCs (a very immature form of RBCs seen when there is a severe demand for RBCs to be released by the bone marrow), non-regenerative anemia (it is a condition in which the bone marrow does not and cannot respond to the red blood cell deficiency) and thrombocytopenia may be distinctly noted.

The anemia is severe in acute MPDs. Also in animals with myelofibrosis anemia is characterized by anisocytosis (red blood cells of unequal size) and poikilocytosis (presence of abnormally shaped red blood cells in the peripheral blood). Apart from this other conditions like pancytopenia and leukoerythroblastosis (bone marrow is infested with lesions that cause it to compress with a variable number of immature cells of the erythrocytic, granulocytic series in the circulation) may be present in dogs with myelofibrosis.

Diagnostic techniques and work-ups – For diagnosing myeloproliferative diseases, the pathological investigations consist of peripheral blood and bone marrow examination. In case of acute MPDs, blast cells are usually found circulating in the peripheral blood and bone marrow. If however, the blast cells are absent from the peripheral blood, bone marrow disease, like non-regenerative anemia, or thrombocytopenia may indicate that leukemia is afoot. Sometimes cancerous cells may also be detected in the cerebrospinal fluid (CSF) when the central nervous system is under attack. Cytochemical staining of the blast cell is necessary for distinguishing acute myeloid lymphoma from lymphocytic leukemia.

In some cases electron microscopy is performed for the pedigree analyses of the blast cells. Morphologic and cytochemical analyses have been the most reliable methods of cell identification so far but newer veterinary breakthroughs, like immunophenotyping (it uses antibodies to study proteins expressed by cells) or immunohistochemistry are being increasingly used in the diagnosis of leukemia.

However, it is very important to distinguish chronic myeloproliferative diseases from other non-cancerous causes of increase in cell types. For diagnosing polycythemia vera which is a condition characterized by an elevated number of red blood cells, white blood cells and platelets, it is essential to first distinguish between absolute and relative polycythemia vera. In the former, the red blood cell mass is increased on account of hypoxia (deficiency in the amount of oxygen reaching tissues). While in the latter the plasma volume is decreased due to hemoconcentration (decrease of the fluid content of the blood), dehydration, or hypovolemia (diminished volume of circulating blood in the body) and the absolute cell mass is not increased. Sometimes erythropoietin produced by kidneys may be altered due to renal cell carcinoma or in renal disease. For ruling out these causes the doctor will perform laboratory tests like thoracic radiographs, arterial blood gas analysis and renal ultrasonography.

However, for distinguishing chronic myelogenous leukemia from leukemoid reaction, the diagnostic work-ups include biopsy of the liver or spleen.

Treatment
Acute Leukemias
So far only cytoreductive chemotherapy has been successful in eradicating leukemic cells. The combinations most commonly used are cytosine arabinoside and an anthracycline, vincristine and predinisone. Based on the success of this protocol, COAP combination consisting of cyclophosphamide, vincristine, cytosine arabinoside and prednisone can be used as maintenance therapy in canine lymphoma.

The chemotherapy protocol notwithstanding significant bone marrow suppression will eventually take place. Under these circumstances transfusions of whole blood or platelet-rich plasma may be required to treat anemia and thrombocytopenia. Infection is usually managed with aggressive antibiotic therapy. However, due to the invasive nature of the disease the main aim should be to provide palliative supportive care.

Polycythemia Vera
In case of polycythemia vera the main thrust of treatment should be to reduce the red cell mass and this can be done by infusing colloid and crystalloid solutions to replace the lost electrolytes. The chemotherapeutic protocol of choice includes hydroxuurea, an inhibitor of DNA synthesis.

Chronic Myelogenous Leukemia
The main aim of treatment here is to control the proliferation of abnormal cell line and enhance the quality of life. For treating chronic myelogenous leukemia during the chronic phase, hydroxyurea has been found to be most effective. In spite of good response to chemotherapy dogs eventually enter a terminal phase.

Essential Thrombocythemia
Hydroxyurea is the drug of choice for treating thrombocytosis. Although this is found quite rarely in dogs, 1 dog was treated with a combination of vincristine, cytosine, arabinoside, cyclophosphamide and prednisone.

Myelodysplastic Syndrome
Although there is no standard therapeutic regimen for dogs with myelodysplastic syndrome, some of them are sensitive to treatment with recombinant human erythropoietin and prednisone. Supportive care with transfusions may prove beneficial. Survival is variable because MDS usually aggravate to leukemia. Many dogs are euthanized or die of sepsis (medical condition characterized by whole body inflammatory state), bleeding, or anemia.