What is histiocytosis in dogs? What makes it malignant?

Histiocytosis is a condition with white blood cells that form tumors (histiocytomas) in tissues and organs, like the skin, bones, spleen, liver, lungs, and lymph nodes. There are two types of histiocytomas in dogs, canine cutaneous histiocytoma and malignant histiocytoma.

Histiocytes are leukocytes or white blood cells that occur in the tissues. They include two major lineages of cells like macrophages and dendritic cells. Macrophages remove damaged cells, foreign bodies and clear intracellular pathogens (germs present in cells) while dendritic cells make sure that lymphocytes identify foreign (like peptides derived from pathogens), or altered bodies (like mutated peptides derived from cancer cells). 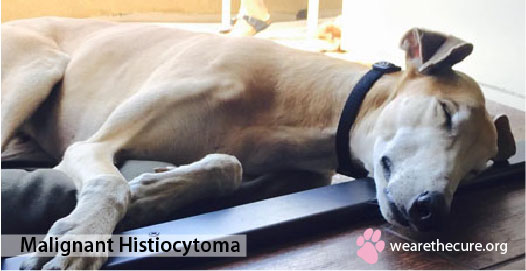 Malignant histiocytosis, or disseminated histiocytic sarcoma, forms cancerous tumors throughout the body, including organs and in some cases bone. The condition can progress rapidly and can be fatal.

For dogs with malignant histiocytoma, these are anaplastic (undifferentiated cell, characteristic of malignant neoplasms) round cells that no longer resemble macrophages (white blood cells within tissues, produced by the division of monocytes) and display multiple criteria for malignancy.

They arise in the skin or spleen as a single expansile tumor or they may also appear as part of a multi-organ disease that often involves the spleen, liver, bones and kidneys. They mostly affect middle-aged dogs. Breeds like Golden Retrievers, Rottweilers and Bernese Mountains are highly predisposed.

The symptoms of malignant histiocytoma your dog exhibits will vary based on the location of the tumors and can manifest in several ways. Some common signs may include:

When occurring on the dogs skin, lesions can appear. These lesions are usually gray or white. But they can also have red mottling, based on the amount of hemorrhage and necrosis (premature death of cells and living tissues). Margins are often distinct but without encapsulation. (confinement of an individual molecule within a larger molecule).

There are several diagnostic work-ups for dogs who may be suffering from malignant histiocytomas. Depending on your dog’s symptoms and Vet’s opinion, radiographs, ultrasonography, immunohistochemistry and cytology may be appropriate.

Radiographs help reveal abnormalities like mediastinal mass (caused by a variety of tumors and cysts), followed by pulmonary nodules or consolidation, hepatomegaly (enlarged liver) pleural effusion (excess fluid that accumulates in the pleural cavity) and splenomegaly (enlarged spleen) if there are any.

Ultrasonography is useful in detecting hypoechoic (relating to abnormal echoes in ultrasonography due to pathologic changes in the tissue) nodules in the spleen and also other variable hepatic tumors. Other anomalies include mesenteric and medial iliac lymphadenopathy (enlarged mesenteric and medial iliac lymph nodes) as well as hypoechoic lesions in the kidneys.

Aspirates (fluid of a body cavity) from afflicted organs are collected. These are composed of large numbers of anaplastic round cells that show marked anisocytosis (It is a term which means that a patient’s red blood cells are of unequal size) and anisokaryosis (inequality in the size of the nuclei of cells) and contain abundant, lightly to deeply basophilic cytoplasm (part of a cell enclosed within plasma membrane) as well as round to oval to multilobulated nucleus (nucleus with multiple lobes). Numerous bizarre mitoses and multinucleated cells are also present. This helps in determining the extent of the disease.

Immunohistochemistry aids the diagnosis of a particular type of cancer. It also helps in the patient’s prognosis. In cases of metastases or carcinoma of unknown primary origin, where it may be difficult to determine the type of cell from which the tumor originated, immunohistochemistry can identify cells by the characteristic markers on the cell surface. It can also help distinguish between benign and malignant tumors.

Immunohistochemistry is a method of analyzing and identifying cell types based on the binding of antibodies to specific components of the cell. It is sometimes referred to as immunocytochemistry. In this case, expression of antigens (substance that generates the production of antibodies) confirms that canine malignant histiocytes are of myeloid dendritic (white blood cells that are not lymphocytes) origin.

There have been some advances in treating dogs with malignant histiocytosis with recent studies showing, non-restricted cytotoxic T-cell line TALL-104 therapy (name of a therapy) has yielded very satisfying results.

The dogs received multiple injections of lethally irradiated (40 Gy) TALL-104 cells at a dosage of 10 cells/kg with cyclosporin A, followed by monthly infusions. No toxicity developed during the cell therapy. One dog with advanced metastasis was administered chemotherapy. He showed complete remission within two months, but died 14 months later of different causes.

Another three dogs with lymphadenopathy at the time of diagnosis were treated with TALL-104 cells as single agent radiation with no chemotherapy. Two of them showed complete remission. The last dog had two long-lasting partial responses. Complete remission was finally achieved with a combination of cell therapy and chemotherapy.

Recent studies have shown that the chemotherapeutic protocol comprising cyclophosphamide, vincristine, and prednisolone did not yield desired results. Another 7 dogs were euthanized following diagnosis.

It has been suggested that administration of a combination of cyclophosphamide, vincristine, doxorubicin, and prednisolone may result in survival times ranging from several months to 6 years. It has also been reported that treatment with cytotoxic T-cell line TALL-104 induced complete remission in four dogs with advanced disseminated histiocytoma for time periods ranging from 9 to 22 months.