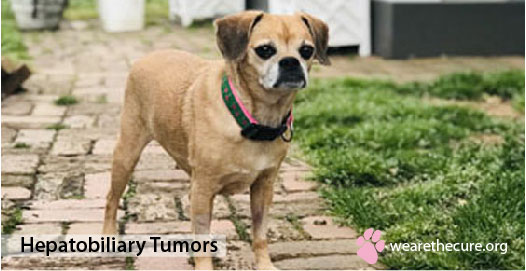 Description– These are very rare tumors that account for less than even 1.5% of all canine tumors. However, secondary hepatobiliary tumors are more common and occur 2.5 times more frequently than primary ones. They mostly metastasize from the spleen, gastrointestinal tract and the pancreas. Other forms of malignancies like lymphoma, histiocytosis and systemic mastocytosis also affect the liver. Nodular hyperplasia (hard, pale elevations on the surface of the gland) is mostly diagnosed in older breeds but in a vast majority of cases they are benign. Hepatobiliary tumors are basically of 4 types like hepatocellular, bile duct, neuroendocrine (or carcinoid), and mesenchymal (sarcoma). There are also three morphologic types of these primary hepatic tumors like massive, nodular and diffuse. Massive liver tumors are usually large single mass confined to a single liver lobe. Nodular tumors are multifocal and involve multiple liver lobes. In diffuse involvement, the neoplasia represents multifocal and coalescing (to grow together) nodules in all lobes of the liver (right, left, caudate and quadrate) and the hepatocytes (Functional part of liver involved in protein synthesis, protein storage and transformation of carbohydrates, synthesis of cholesterol, bile salts and phospholipids, and detoxification, modification and excretion of exogenous and endogenous substances. The hepatocyte also initiates the formation and secretion of bile) are thinned and shortened.

Neuroendocrine tumors– Endocrine tumors are also called carcinoids. They occur rarely in dogs. These tumors develop from the neurorectodermal (the region of embryonic ectoderm that develops into the brain and spinal cord as well as into the nervous tissue of the peripheral nervous system). These tumors are usually intrahepatic although instances of extrahepatic tumors have been seen in gall bladder. Younger breeds have a predisposition. These tumors are quite aggressive in nature because they involve more than one liver lobe. They also metastasize to the regional lymph nodes, peritoneum, lungs, heart, spleen, kidneys, adrenal glands and pancreas.

Sarcomas– The most common type of hepatic sarcomas include hemangiosarcoma, fibrosarcoma and leiomyosarcoma. Liver is the most common site of metastasis for dogs with hemangiosarcoma. In 4-6% of dogs hemangiosarcoma arises primarily in the liver. Other hepatic primary sarcomas include rhabdomyosarcoma, liposarcoma, osteosarcoma and malignant mesenchymoma. Fore dogs afflicted with disseminated histiocytic sarcoma, the common metastatic sites include liver, lungs, spleen, lymph nodes and bone marrow. Benign vascular tumors (a benign or malignant growth formed from blood vessels) like hemangiomas are mostly unheard of in dogs. There is no breed predilection. But some reports suggest that males are slightly predisposed. Hepatic sarcomas are highly metastatic. In 86-100% of cases, the tumos have been reported to spread to the spleen and lungs. Primary and nonhematopoietic (neoplasm not arising from blood cells) hepatic tumors are uncommon in dogs.

Other primary hepatic tumors– Myelolipoma is a non malignant tumor of the hepatobiliary origin. These are mostly composed of adipose tissue (body fat) combined with normal hematopoietic elements. The cause of primary hepatic tumors has been attributed to chronic hypoxia (condition in which the whole body or a region of the body is deprived of adequate oxygen supply). Myelolipomas have been reported in liver lobes that move up into the chest cavity as a result of diaphragmatic hernia (it is a congenital defect in which there is a hole in the diaphragm [the muscle that separates chest cavity from the abdominal cavity] Some of the organs move up into the chest cavity through this abnormal opening). They can be single or multifocal.

Symptoms– The clinical signs include inappetance (loss of appetite), weight loss, lethargy, vomiting, polyuria/polydipsia (urge to urinate frequently/increased levels of thirst) and ascites (accumulation of fluid in the peritoneal cavity). Although symptoms like ataxia (lack of coordination of muscle movements), weakness and seizures (convulsions) are uncommon, they can be induced by hepatic encephalopathy (it is a neuropsychiatric abnormality in dogs with liver cirrhosis in which all toxic substances removed by the liver accumulate in the blood and impairs the brain cells), paraneoplastic hypoglycemia (low blood sugar levels) or central nervous system metastasis. Dogs with extrahepatic bile duct carcinomas and diffuse neuroendocrine tumors present signs of icterus (presence of jaundice in the sclera of the eye).

Hemogram and serum biochemistry profile are needed since dogs with tumors of the liver usually suffer from leukocytosis (condition characterized by an elevated number of white blood cells), anemia and thrombocytosis (abnormally high number of platelets in the blood). Dogs with hepatobiliary tumors usually have elevated levels of enzymes. Due to the increased activity of these enzymes, hepatocellular damage or biliary stasis (obstruction of bile flow due to liver cell damage or obstruction of intrahepatic bile ducts) are probably indicated. But they do not help in determining hepatic neoplasia always.

The type of liver enzyme anomalies may indicate the nature of tumor and also help in differentiating between primary and metastatic liver tumors. Changes in serum biochemistry profile for dogs with hepatic tumors may also indicate hypoglycemia, hypoalbuminemia (levels of albumin in blood serum are abnormally low), hyperglobulinemia (condition characterized by large amounts of globulins [any class of proteins not soluble in water but soluble in saline solution] in blood) and increased pre and post prandial bile acids (before and after eating a meal). In dogs with primary tumors, the alkaline phosphatase (hydrolase enzyme responsible for removing phosphate groups from many types of molecules), alanine transferase (enzyme found in the liver and other tissues) are usually elevated. High levels of alanine transferase released into the blood may be an indication of liver damage, cancer or other diseases. In dogs with hepatocellular carcinoma, the levels of alpha-fetoprotein (an antigen produced in the liver of a fetus that can appear in certain diseases of adult dogs) are usually increased and this may be an indicator of liver cancer in 75% of dogs. But this cannot be taken as a very sharp indicator of hepatocellular carcinoma because serum levels of fetoprotein are usually elevated in other types of liver tumors like bile duct carcinoma, lymphoma and non-neoplastic hepatic disease.

Other types of tests are needed for making proper diagnosis, demarcating the stage and also chalking out the course of treatment. Abdominal radiographs generally detect abdominal mass with caudal and lateral displacement of the stomach. This happens only when there are massive tumors in the liver. Sonographs are essential because of their accuracy in the diagnosis of hepatic tumors. Abdominal ultrasonography is important for identifying and characterizing hepatobiliary tumors in dogs. Other utilities of ultrasonography include defining the tumor as nodular, diffuse or massive. The size and location of the tumor, and its relation with the adjoining anatomic structures like the gall bladder and caudal vena cava (returns deoxygenated blood to the heart) can be established through this. For determining tumor vascularization (refers to the degree of adequate or inadequate supply of ischemic [restriction of blood supply due to restriction in the blood vessels] Doppler imaging techniques can be used.

Ultrasound-guided fine needle aspiration or needle core biopsy of hepatic masses is useful for obtaining tissues for diagnostic purposes. A coagulation profile (test to determine the speed of blood coagulation at different steps of the coagulation pathway) is needed before hepatic biopsy since hemorrhage occurs in at least 5% of the cases.

Treatment– Liver lobectomy (surgical extirpation of a lobe of the liver) is the treatment recommended for dogs with hepatocellular carcinoma. The methods used in liver lobectomy include finger-fracture, mass ligation, mattress sutures and surgical stapling.Mass ligation is not meant for large tumors with wide base. In smaller lesions, vets usually opt for blunt dissection (surgical separation of tissue layers by means of an instrument) of the hepatic parenchyma (hepatocytes, a kind of cells present in the liver that secrete bile) and individual ligation (surgical process of tying up an anatomical channel) of bile ducts and vessels. If doctors want to save time and avoid complications, they use surgical staplers (used in surgery to close wounds). It is important to assess the relationship of right-sided and central liver tumors with caudal vena cava before the surgery. So, doctors generally opt for advanced imaging and sonographs.

Prognosis- The outcome of dogs with massive hepatocellular tumor is good. Only in 0-13% of cases the tumors recur following liver lobectomy. Reports have found metastasis to liver and lungs occurring in 0-37% of the cases only. However, the prognosis for dogs with diffuse or nodular tumors is relatively poor. Due to the involvement of multiple nodes, surgical extirpation is not possible. The efficacy of radiation and chemotherapy have not been established in the treatment of hepatocellular carcinoma in dogs. So far radiation is concerned, the liver of dogs cannot stand cumulative doses more than 30 Gy. and the use of chemotherapy, has not been properly investigated in dogs with hepatocellular carcinoma. However, options like immunotherapy, hormonal therapy with tamoxifen and antiangiogenic agents (anti-angiogenesis is a form of targeted therapy that uses drugs or other substances to stop tumors from making new blood vessels) are being currently investigated in dogs.

Prognosis– The median survival time is 6 months in the majority of cases. Local recurrence and metastasis have been found to be the factors inducing death.

Treatment– Carcinoids are proliferative and therefore not amenable to surgical extirpation.

Prognosis– The efficacy of radiation therapy and chemotherapy have not been established in the treatment of dogs with neuroendocrine tumors. Therefore prognosis is very poor because in almost 93% of cases it spreads to the regional lymph nodes, peritoneum and lungs.

Treatment– For tumors which are solitary and massive, liver lobectomy is recommended. However, the efficacy of chemotherapy is yet to be assessed.

Prognosis– The outcome is very poor due to metastasis at the time of surgery.