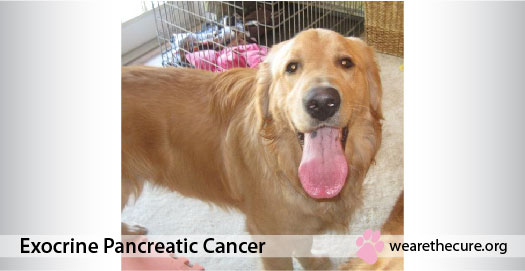 Description– Exocrine pancreatic cancer is uncommon in dogs. They arise from the epithelial tissues (they form the covering or lining of all internal and external body surfaces) of the pancreas that produce digestive secretions. They are mostly adenocarcinomas that are ductular or acinar in origin (malignant tumors arising from duct cells or acinar cells). Benign exocrine pancreatic tumors are rare. Nodular hyperplasia (hard, pale elevations on the surface of the gland) is common in dogs. Older breeds and spaniels are predisposed.

Causes– Like all other cancers, the etiology of exocrine pancreatic cancer is also unknown. But in order to study the incipient phase and growth behavior of pancreatic duct adenocarcinoma, sometimes N-ethyl-N’-nitro-N-nitrosoguanidine is administered intraductally in dogs. This chemical has been found to trigger carcinoma.

Symptoms– The symptoms include weight loss, anorexia, vomiting, diabetes mellitus (accumulation of sugar in the blood), abdominal distension, icterus (presence of jaundice in the sclera of the eye), ascites (accumulation of fluid in the peritoneal cavity) and depression. Sometimes the signs may also be accompanied by pancreatitis (inflammation of the pancreas). Other non-clinical symptoms like mild anemia, hyperglycemia (increased sugar levels in the blood), neutrophilia (abnormal increase in the number of a type of white blood cells) and bilirubinemia (presence of excess bilirubin in the blood), may also be present. In extreme cases, signs of pancreatic insufficiency (inability to digest food properly due to a lack of digestive enzymes made by the pancreas) may be exhibited.

Treatment– The diagnostic techniques consist of positive contrast upper gastrointestinal radiographs, flow cytometry (it is a technique for counting and examining microscopic particles suspended in a stream of fluid) and ultrasonography.

Radiographs may reveal delayed gastric emptying and compression or invasion of the duodenum. In ascites, there is an abnormal growth of cells that may be revealed on cytologic evaluation. Flow cytometry is useful in differentiating between malignant and benign abdominal effusions. Ultrasonography is useful in localization of the primary tumor, documentation and aspiration of fluid and metastasis to liver and regional lymph nodes.

Most nonislet cell carcinomas of the pancreas spread to the lymph nodes and liver at the time of diagnosis. They are extremely aggressive and proliferative. If the tumor is found to have metastasized to the peritoneal cavity, draining lymph nodes and the liver, doctors generally don’t go for heroic surgery (a surgery in which wide resection margins are obtained since the tumor has spread beyond a resectable size. It is mostly performed to reduce pain in terminally ill patients).

Complete pancreactectomy or pancreaticoduodenectomy (a procedure in which the head of the pancreas, the entire duodenum, a portion of the jejunum, the distal third of the stomach, and the lower half of the common bile duct are removed, to relieve obstruction caused by malignant tumors) is sometimes performed but without success. Palliative gastrointestinal bypasses (allow the passage of food into the intestine) is a temporary option if there is bowel obstruction.

Radiation and chemotherapy have not yielded heartwarming results.

Prognosis- The outcome is very poor since the disease is usually at an advanced stage at the time of diagnosis.