Is Resveratrol A Cure For Cancer in Dogs?

When your dog is in pain, it can be heartbreaking. The helplessness you feel is one of the worst feelings you’ll ever have. I remember seeing my poor Bruno shaking uncontrollably and I knew something was terribly wrong. If you ever hear the vet begin with those awful words, “I’m sorry…”, you don’t want to hear the rest. Very often, the bad news is a cancer diagnosis and you get that sinking feeling, you know, that deep sense of hopelessness. If you’re a pet owner in this situation, cheer up, there may be hope after all.

Without a doubt, you want the best for your four-legged family member, but with so many choices, the range of recommendations regarding dog cancer can be overwhelming. While there are traditional options for managing canine cancer, such as surgery, chemotherapy or radiotherapy, there are also lots more, including dozens of alternative therapies, ranging from herbs to vitamins, nutritional supplements, energy therapies and homeopathy.

The natural options that are available nowadays are worth investigating. You have a good chance of finding one that puts your mind at ease. A natural healing method may complement conventional methods, while avoiding or reducing the downsides you’re concerned about. These holistic protocols tend to be simpler and less expensive than conventional therapies.

We want to zero in on one particular supplement option that has its roots firmly planted in nature and may be very beneficial for your dear pet at any time in their life, healthy or diagnosed with dog cancer. More and more positive data has been emerging to support the use of the compound resveratrol in combination with traditional therapies, regardless of the type of therapy you choose. Those who can’t afford conventional therapies may also find this is an important ingredient to have as an effective alternative.

Resveratrol is a polyphenol or antioxidant compound that is found in grape skin and seeds. Polyphenols are produced as part of a plant’s defense system against fungus, infection or injury. Red wine contains high levels of resveratrol, as do raspberries, peanuts and other plants.

During winemaking, the alcohol produced by the fermentation process dissolves the polyphenols that are in the skin and seeds.

Antioxidants are known to protect your cells and resveratrol has been credited as the major substance responsible for making moderate consumption of red wine good for your heart.

What the Research on Resveratrol Shows

Resveratrol has shown significant promise in laboratory studies of its effect on cancer, but it has also been noted to possibly have a positive effect on the aging process because it seems to turn on an enzyme called sirtuin 1 that can slow down the aging process. Studies to confirm the effect on the length of human life would take decades, but in every living being tested so far, it actually does extend life.

What Studies on Red Wine Say

According to research studies published in the International Journal of Cancer, drinking a glass of red wine a day may cut a man’s risk of prostate cancer in half and that its protective properties appear to be strongest against the most aggressive forms of the disease. It was also shown that men who consumed four or more 4-ounce glasses of red wine per week have a 60 percent lower incidence of the more aggressive types of prostate cancer.

The Effect of Resveratrol on Dogs & Humans

Resveratrol is believed to protect dogs’ bodies against oxidative damage by waste products from cellular chemical reactions called free radicals. These chemicals can damage important parts of cells, including proteins, membranes and DNA and may have a damaging effect, particularly on the cardiovascular system and neurons in the brain. Cellular damage caused by free radicals has been implicated in the aging process and development of cancer. By protecting dogs against damage from free radicals, resveratrol lowers the risk of cancer and heart disease, and longevity is supported.

Initial research done at CU Denver has revealed that resveratrol has an effect on human cancer cell lines.

Dr. Robert Sclafani, Chair of the Biochemistry and Molecular Biology Department at CU Denver says, “There’s no doubt, if you feed an animal this stuff, they’re going to get less cancer.”

He explains, “What resveratrol does, as we found in our studies, it activates a system that’s present in cells but only activates it in cancer cells, not in normal cells … What it does is it fools the cell into thinking that its DNA is being damaged. And then it turns on a response mechanism that now the cell does not divide anymore.”

Research on the antioxidants found in red wine has shown that they may help inhibit the development of certain cancers. In fact, it has been noted by the National Cancer Institute as a potential cancer preventative and treatment.

How Does Resveratrol Prevent Cancer?

Studies of red wine have examined the effects in several cancers including leukemia, skin, breast and prostate cancers. Scientists are studying resveratrol to learn more about its cancer preventive properties.

Resveratrol has been shown to reduce inflammation and it also reduces activation of NF kappa B, a protein produced by the body’s immune system when it is under attack. This protein affects cancer cell growth and metastasis.

Recent evidence from animal studies suggests this anti-inflammatory compound may be an effective chemopreventive agent in three stages of the cancer process: initiation, promotion and progression.

There’s an option that’s worth considering if you want to give your beloved pooch a fighting chance for a long healthy life, at least in dog years. Resvantage Canine is a supplement which contains resveratrol and promotes longevity and protection from age-related diseases. After all, in numerous animal studies, resveratrol has proven to slow the onset of practically all age-related diseases, including those that affect cardiovascular and neurological function.

All the ingredients in this supplement are naturally occurring. The trans-resveratrol is sourced from the Knotweed plant. Besides resveratrol, it also contains Atlantic kelp which is rich in vitamins, trace minerals and amino acids for nutritional support, flaxseed oil for Omega 3 and lecithin for a healthy liver and improved metabolic processes. This combination makes a powerful immune-boosting and anti-inflammatory supplement that promotes the long-term health of your pet, supporting them as they age. 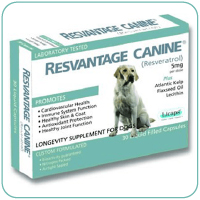 In a nutshell, antioxidants like resveratrol are known for their anti-inflammatory and anti-cancer properties. If given to your dog while healthy, your furry friend’s health and longevity are highly likely to improve. In dogs that have been diagnosed with cancer, the odds are that the cancer growth will be slowed. Resveratrol has been shown to be so beneficial, it’s worth consideration, don’t you think?