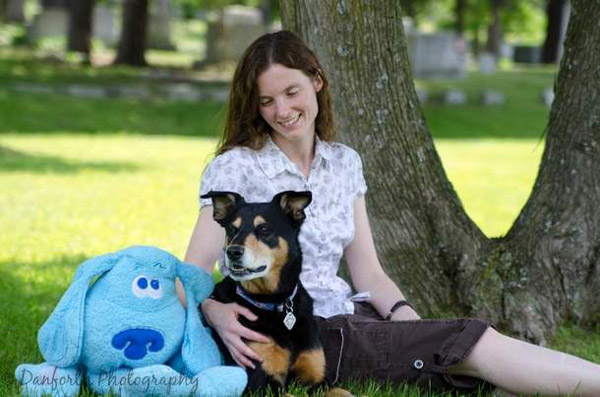 As a veterinarian, Dr. Kyle Ann Stevenson keeps tabs on dogs and the cancers they develop.

In a “scary statistic,” she notes that 25 percent of dogs will develop some form of cancer in their lifetime.

Of those dogs, 50 percent will die from that cancer.

In June 2015, Potter, Dr. Stevenson’s beloved Doberman/shepherd mix, became one of those statistics.

Potter succumbed to an aggressive form of heart-based cancer after being diagnosed with it just two weeks earlier.

Dr. Stevenson remembers the date of diagnosis clearly: May 29, 2015 – her eighth anniversary of starting work at the Animal Doctors Veterinary Clinic, 1631 State St.

Dr. Kyle Ann Stevenson will host a benefit walk for the National Canine Cancer Foundation next Saturday.
She poses with her dog, Potter, who died of cancer last year. (Photography: Patrick Danforth)

“Imagine being a veterinarian and not being able to help your beloved pet,” Dr. Stevenson said in response to emailed questions. “It was the most devastating and humbling experience that I have ever been through.”

It has taken a while for her to return to her “new normal” without Potter.

“There will never be another one like him,” she wrote. “Potter was my ‘soul dog.’”

Now, Dr. Stevenson is putting her heart and soul into a benefit next Saturday that she hopes will give hope to others who have dogs with cancer, with funds going to an organization that seeks to eliminate cancer as a major health problem for dogs through education, outreach and research.

Dr. Stevenson will host Making a Mark on K9 Cancer from 10 a.m. to 2 p.m. next Saturday at Thompson Park. Proceeds from the event will go to the National Canine Cancer Foundation, a nonprofit organization based in Phoenix. 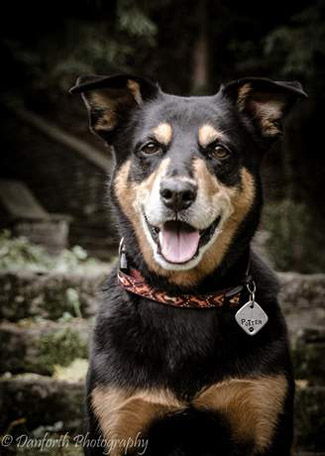 The event involves a benefit walk with two separate routes at the park. One is three-quarters of a mile and the other is 2 miles. Both routes will be led by volunteers.

The walk, Dr. Stevenson said, will also be an excellent tribute to Potter.

“Potter loved the park, and walking was our favorite pastime to do together,” she wrote. “On my days off, we would walk three times a day, no matter the weather.”

Dr. Stevenson and Potter “adopted each other” on Prince Edward Island, Canada, in 2005 while she was in her third year of veterinary school at the Atlantic Veterinary College. The one-year-old dog had been a stray.

Dr. Stevenson, who lives and grew up in Dexter, wrote an essay about her dog’s diagnosis and death as a way to cope and to aid others who may be in a similar situation. In the essay, she recalls when she realized it was time to say goodbye to Potter. It was June 12, 2015, following a two-week “roller coaster ride” after his diagnosis.

“When he just stopped walking and looked at me, not willing to walk any further, I knew that he wasn’t my Potter anymore. I was so very lucky to have the amazing support of my co-workers, family and friends while I made the unthinkable decision to say goodbye,” Dr. Stevenson wrote.

She hopes that next Saturday’s event will bring similar support to others who have and had dogs with cancer and to support an organization working to find a canine cancer cure.

“I don’t want other people to have to experience that kind of hopeless anguish,” she said.

The National Canine Cancer Foundation, Dr. Stevenson said, has allocated over $1 million over the past two years to raise awareness of canine cancer, and this year over $300,000 has been approved for spending on research grants.

:: THE DETAILS ::
WHAT: Making a Mark on K9 Cancer benefit walks, hosted by Dr. Kyle A. Stevenson and Paws for Potter.
WHEN: 10 a.m. to 2 p.m. Saturday, Sept. 17.
WHERE: Rotary pavilion at Thompson Park, Watertown.
COST: $25 per person with up to two dogs and $15 per person without a dog. The event is free for children under the age of 18. Receive $5 off registration if done before Tuesday.
For preregistration forms, email Dr. Stevenson at paws4potter@gmail.com.
OF NOTE: Participating dogs must be current on vaccines. No dogs less than 4 months of age and no female dogs in heat will be allowed.
Dogs must be kept on a 6-foot leash or shorter at all times. Retractable leashes are not suggested.