This dog is at the forefront of cancer research 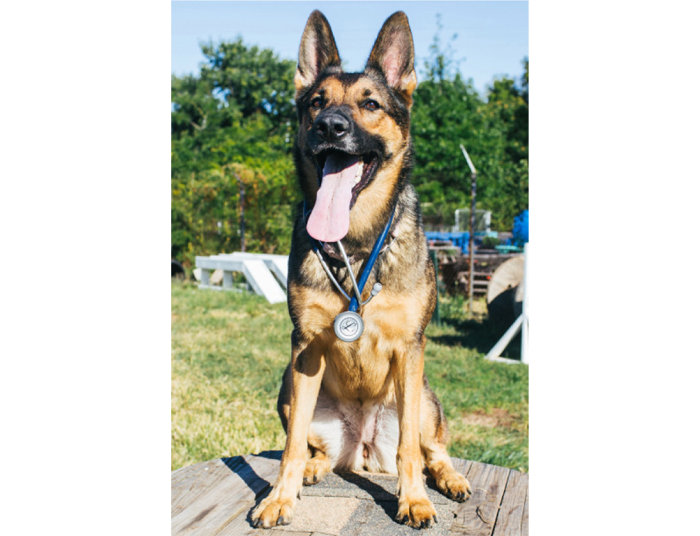 But the pooch isn’t just participating in agility, obedience and search training — she’s also on the front lines of cancer research.

Kuban is one of six fourth-year students at the University of Pennsylvania School of Veterinary Medicine followed in the new Animal Planet series “Life at Vet U,” premiering Saturday at 10 p.m. Tsunami has worked on the center’s ovarian-cancer-detection research project since it launched in 2013 to study whether odors emanating from ovarian tissue can provide a reliable method for early detection.

Using a “scent wheel” — a circular device with 12 ports used to introduce multiple sources of scent (blood-plasma samples from cancer patients, benign growths and healthy controls, as well as other “distractor” scents) — researchers can isolate the exact volatile organic compounds that the dogs can smell. In these 10- to 15-minute smelling sessions, Tsunami’s nose is more than 90 percent accurate in identifying malignancies.

“There is no machine that is as powerful and as specific as what our dogs can do,” Kuban, 29, tells The Post. “Canines smell up to 1,000 times more accurately than humans, and they have up to 300 million olfactory receptors as opposed to [our] 6 million.

“By narrowing it down and analyzing the volatile compounds that are being emitted by the samples, we can eventually reach the specific [odor] markers that we can screen for.”

Tsunami and the two other dogs in the program — a 3-year-old springer spaniel and a 5-year-old yellow Labrador retriever — were selected for their precise hunt drive and specifically trained to identify the cancerous compounds, first in tumor samples and then just plasma samples, explains Dr. Cindy Otto, director of the Penn Vet Working Dog Center.

The canine study is hoping to increase survival odds through early detection. Ovarian cancer is the fifth-leading cause of cancer deaths among women in the US, according to the CDC. More than 80 percent of patients are diagnosed at a late stage, according to the Penn Vet Working Dog Center.

Otto says researchers have successfully completed the first phase — determining that dogs can detect ovarian cancer — and the next phase will be to determine if dogs can detect it in samples from earlier-stage cancer patients. The center is applying for a grant to fund a five-year plan to develop a screening tool (though it doesn’t include Fido seeing patients in place of a local oncologist).

“By isolating the chemicals of cancer that the dogs can smell, the team hopes to one day create an electronic sensor that can detect cancerous tissues early,” Kuban explains. “The end goal is actually not to have dogs in doctor’s offices doing diagnoses.”