The Cost of Our Dog’s Cancer 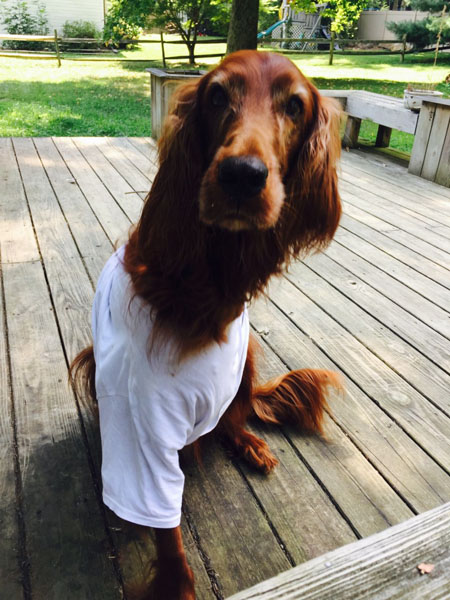 He shuffled into our house for the first time, I remember, looking awkward, imbalanced. He took a moment to explore, decided our home would be accommodating enough, lifted he lifted his back leg, and peed on the living room carpet. That night, he was too nervous to sleep in his crate alone, so my brother and I slept on the floor beside him.

After a week, the house was his. He bounced off the walls, slid across the kitchen tile, chewed anything he could get his mouth around. He didn’t bite but he toothed recklessly. He seemed comforted by the taste of hands.

He played the comedian. He stole pillows. He stole shoes. On one occasion, he stole a cellphone. He loved the thrill of being chased. When he got the chance, he ran away, declaring his presence to the neighborhood with loud, echoing barks, challenging anyone brave enough to try and catch him. When he exhausted himself, he returned.

His unwavering disobedience surprised us, but we loved him.

One rainy night, when some friends were over for dinner, Riley escaped the unguarded open front door and bolted off towards the edge of the neighborhood. I ran after him but in doing so only excited him further. I stopped when we got close to traffic, pleaded with him to come to me, more frightened by his — our — proximity to tragedy than frustrated by his defiance. He came back. I don’t think he was deterred by the road. He gets afraid alone in the dark.

When he was still young, my mother noticed a few of his teeth were rotting. He was aging quickly. The hair around his eyes whitened. His ears grew matted. He would have bouts of nausea. Something about the breed, we hypothesized. Nonetheless, his energy was unrelenting. He got up at dawn, eager to embrace the new day by barking into the brisk blue sky. Our resistance was overcome by his insistence. He eventually got outside, scaring off the birds and the squirrels and the rabbits. Sorry, neighbors, we thought.

We took him on long walks in the woods to tire him out.

I received a text from my mother the night they found the lump. I was in Shelburne, Vermont, drinking a beer on a farm with a young couple I had just met, stricken that very moment by the affection of their young Australian Shepherd, Margot.

“What are you doing?” the text read.

When I responded, she told me she’d call me the following morning.

Riley had osteosarcoma in his front left leg. Luckily, the vet did not detect any metastases. We were informed, however, that if we were to treat the cancer, a process that entailed amputation and a few rounds of chemo, his life expectancy would still not exceed one year. Without any intervention, his leg would likely break soon, and he’d probably die within a month.

We deliberated for a few days. On the one hand, we didn’t have insurance and it was an expensive operation, especially given that they were not curing him, just treating him. The chemotherapy, we learned, would not be as aggressive as it is would be for a human. It would be less likely to expel the cancer, more likely to tame it.

We also considered what was best for Riley. Would he suffer? What would his quality of life be like? Would he still awake at dawn and steal my shoe and yell to the world that there he was?

Given these uncertainties — whether, for him, it would all be worth it — when my parents received an estimate that the entire treatment process would come to be around $ 5,000, they were filled with guilt. They wondered about other causes, ones with a guaranteed benefit. My mother came upon an organization called Operation Smile that treated children’s cleft palates in third world countries. For $ 5,000, twenty children could receive treatment.

She mentioned this to me over the phone while I was still in Vermont. From my back porch, I could see storm clouds collecting over Lake Champlain. We were silent for a little while. Neither of us knew what to say.

When the time to make a decision had arrived, my siblings and I all came to a similar resolution. We told our parents that although we were conflicted, we’d like Riley to go through with the procedure, to at least try. We acknowledged, however, that this was ultimately their choice. At this point we’d all moved out of the house. Not only would they be paying but, for the most part, they’d also be the ones taking care of him.

We told our parents that if they decided it was best to let Riley die, we would understand.

Riley was at Penn Vet for three days. We were advised against visiting him in fear that it would make him anxious.

I came home to see him a few days after he returned, walked through the house to where he was lying by the back door. He was heavily medicated, his eyes languid. I pet his head. He licked my hand. My father put a white shirt on him, spotted with stains of blood, so the area of the incision could heal unobstructed. When I pulled the shirt up I was taken aback by the wound. The stitching ran from his shoulder to his stomach. His entire side was shaved. I underestimated how invasive the procedure would be.

We were told dogs don’t experience the same psychological trauma a human might when they lose a limb. I thought a lot about this. I thought about his reaction when he woke up without one of his legs.

There were some complications.

Shortly after he started walking around, he strained a muscle in his front right leg. It was always hard to tell if he was limping, or if this was just his new gait. He had something going on with his liver and something else with his urinary tract. He returned to peeing on the living room carpet. During those early days, my father told me he was surprised at how hard it was to see him like that.

After about four weeks, he stopped eating. This was not so unordinary for him, at least not for a couple days. But when four days passed, worry set in. My mother, in act of desperation, took him through the Wendy’s drive thru. To her relief, he ate a burger without hesitation. When they got home, he also ate his dinner.

The total cost of the procedure, including the blood work, an x-ray, the surgery, ensuing vet visits, chemo, pain medication, antibiotics, medicine to treat the complications, and the Wendy’s, came to $ 5,793.69.

It’s been almost a year. These days he has certainly slowed down, but then again he’s never been a fan of the summer. There are, admittedly, a couple more rabbits in our backyard than there used to be, and we’ve become a little bit more lenient with keeping the front door shut. But he still barks into the morning. He still gets excited for a trip to the woods. He still steals my shoes.

And when he runs, he’s hard to catch. In full stride, you almost can’t tell he’s missing a leg.