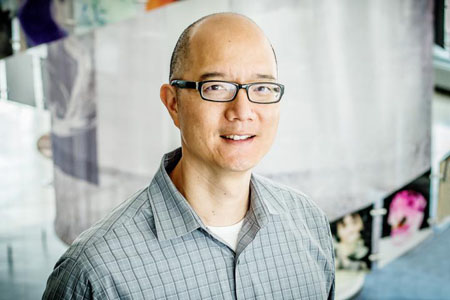 At the University of Illinois, an engineer teamed up with a veterinarian to test a bone cancer drug delivery system in animals bigger than the standard animal model, the mouse. They chose dogs – mammals closer in size and biology to humans – with naturally occurring bone cancers, which also are a lot like human bone tumors.

In clinical trials, the dogs tolerated the highest planned doses of cancer-drug-laden nanoparticles with no signs of toxicity. As in mice, the particles homed in on tumor sites, thanks to a coating of the drug pamidronate, which preferentially binds to degraded sites in bone. The nanoparticles also showed anti-cancer activity in mice and dogs.

The researchers report their results in the Proceedings of the National Academy of Sciences.

These findings are a proof-of-concept that nanoparticles can be used to target bone cancers in large mammals, the researchers said. The approach may one day be used to treat metastatic skeletal cancers, they said.

The dogs were companion animals with bone cancer that were submitted for the research trials by their owners, said U. of I. veterinary clinical medicine professor Dr. Timothy Fan, who led the study with materials science and engineering professor Jianjun Cheng. All of the dogs were 40 to 60 kilograms (88 to 132 pounds) in weight, he said.

“We wanted to see if we could evaluate these drug-delivery strategies, not only in a mouse model, but also at a scale that would mimic what a person would get,” Fan said. “The amount of nanoparticle that we ended up giving to these dogs was a thousand-fold greater in quantity than what we would typically give a mouse.”

Using nanoparticles with payloads of drugs to target specific tissues in the body is nothing new, Cheng said. Countless studies test such approaches in mice, and dozens of “nanopharmaceuticals” are approved for use in humans. But the drug-development pipeline is long, and the leap from mouse models to humans is problematic, he said.

“Human bone tumors are much bigger than those of mice,” Cheng said. “Nanoparticles must penetrate more deeply into larger tumors to be effective. That is why we must find animal models that are closer in scale to those of humans.”

Mice used in cancer research have other limitations. Researchers usually inject human or other tumor cells into their bodies to mimic human cancers, Fan said. They also are bred to have compromised immune systems, to prevent them from rejecting the tumors.

“That is one of the very clear drawbacks of using a mouse model,” Fan said. “it doesn’t recapitulate the normal immune system that we deal with every day in the person or in a dog.”

There also are limitations to working with dogs, he said. Dogs diagnosed with bone cancer often arrive at the clinic at a very advanced stage of the disease, whereas in humans, bone cancer is usually detected early because people complain about the pain and have it investigated.

“On the flip side of that, I would say that if you are able to demonstrate anti-cancer activity in a dog with very advanced disease, then it would be likely that you would have equivalent or better activity in people with a less advanced stage of the disease,” Fan said.

Many more years of work remain before this or a similar drug-delivery system can be tested in humans with inoperable bone cancer, the researchers said.