My personal journey with canine cancer 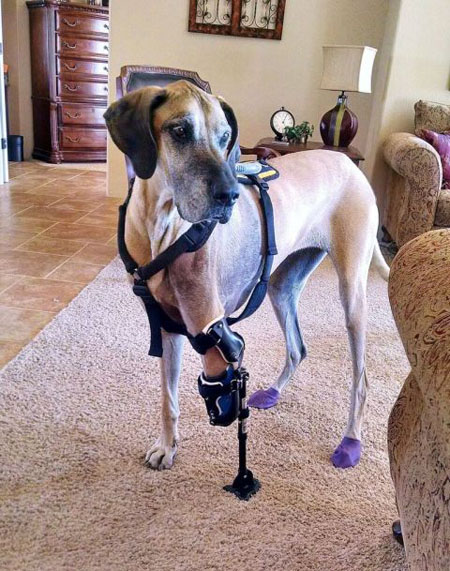 Cancer in our pets is common and often devastating. In my “End-of-Life” practice, about 60 to 70 percent of the cases I see are end-stage cancer. Sadly, cancer hit me personally on July 22, 2014 – the day my wife pointed out a slight swelling on the leg of my beloved Great Dane. My heart sunk instantly when I saw it. I feared immediately that it was osteosarcoma (OSA).

Taylor Dane, as we named her, came into our lives eight years earlier as a beautiful 7-month-old from Great Dane Rescue. Her original owners had relegated her to a lonely existence, isolated in their backyard. She was pretty scared at everything; but, with proper handling and lots of love, her fear turned to trust; and Taylor took over our house – and my heart.

When Taylor contracted a MRSA-type infection after surgery for a tumor in her leg,
amputation was necessary. However, Taylor did well with a prosthetic leg.
(Photo by Dr. Jim Humphries)

I have had many dogs since childhood – dogs I have loved dearly; but never had I experienced the depth of connection I would have with Taylor. She would stare into my eyes as if she was trying to memorize my face and seriously communicate. This relationship was something special, and it quickly grew deep, for both of us.

Imagine how it felt when the radiographs confirmed my worst fear. Taylor indeed had bone cancer; and, without showing a single sign of pain or lameness, the tumor had already encompassed three-fourths of the circumference of the radius. I also knew this was a cancer that spread rapidly and had a poor prognosis.

I immediately took Taylor to the Flint Cancer Center at Colorado State University in Fort Collins to see what could be done. She was insured, so I was ready to do anything modern veterinary medicine had to offer. After long discussions with several specialists, the decision was made to attempt a limb spare procedure. This is a very complex surgery, adapted from human medicine, where the surgeon removes the cancerous bone and replaces it with either a rod or cadaver bone to fill the space. It literally “spares the limb.”

Taylor did very well with surgery. She began chemotherapy, and endured the many necessary bandage changes. She healed from her surgery and learned to use her “new” leg. Our girl was back; as happy and active as ever.

However, within months, she began to show signs of infection – a common problem with this surgery. Cultures revealed a tough MRSA type infection. It eventually went to the bone, and we had to amputate, knowing we could fit her with a prosthetic leg.

With months of patience and training, Taylor began using her artificial leg, and began going for walks with her people and her two Dane buddies. Soon, she was going out in the mornings with her buddies, and staying out playing for an hour or more before coming up the stairs and greeting us with a happy, tired dog grin and a muddy well-used prosthesis.

The median survival rate for OSA is 12 months. In July 2015, we celebrated the one-year anniversary of Taylor’s cancer survival. I was sure we got it. But in August, Taylor began occasionally crying out in pain when lying down. I put her on a multi-modal pain program, which helped for a while. However, she began to lose proper function of her rear legs, and I began to worry about metastasis.

Then, in the early morning hours of Sept. 10, she could not get comfortable. She got up to reposition to another bed and began to cry in pain. This cry was serious. Even with support, her hind legs simply would not work. I will never forget the way Taylor looked at me at that moment of trying to stand on her own and crying. Those eyes, that I had seen thousands of times when she would communicate love and affection, now looked at me and very clearly said, “This is going to be hard on you and hard for me, but you must now let me go.” It was as if she had spoken the words. And so, heartbroken, I did. After sedation, and with our words in her ears and our tears falling on her face, she passed in our arms.

As I look back on the 14 and-a-half months of our fight against osteosarcoma, I wondered if I would do it all again. The post-op care of such a cancer is a lot of work! Yes, I would do it all over again. I would not take anything for those great extra months. And I would not have had those valuable months, if she were not insured.

With the many wonderful things we can accomplish with advances in veterinary medicine, pet health insurance is more important than ever. Having insurance on Taylor gave us options to do all this incredible treatment that we would not have been able to consider had she not been insured. Without it, she would have been euthanized within a few weeks to months.

My experience is not unique. Canine cancer is one of the most common diagnoses I see in my practice; but each case is deeply personal. Each case of cancer potentially robs not only a dog’s life, but it painfully ruptures that wonderful bond we have with those dogs who have so deeply inserted themselves into our hearts.