I love getting to know more about our CORE Members and their reason they support the NCCF month after month.  We could not fight canine cancer without a devoted set of CORE Members like Amanda and her boy Milo.  Their story is one of hope, as Milo is a survivor!  Enjoy Amanda’s story of Milo and his fight against Mast Cell Cancer.

Meet Milo, my 9 year old Silver Lab. Milo is the reason I found you guys and became a Core member. He’s also the name on my beautiful ornament. 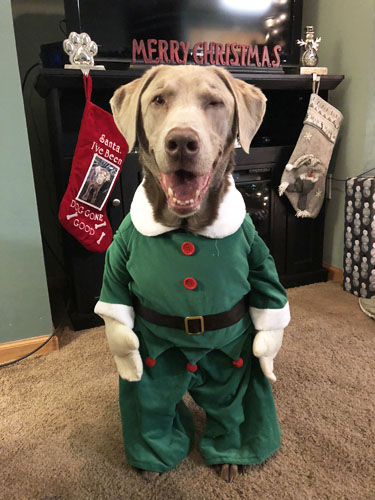 Last November, Milo was diagnosed with Metastatic Mast Cell disease. He had a grade II lump removed the September prior with clear margins but my vet referred us to an Oncologist just to be sure it hadn’t spread. Much to my surprise it had spread and was in his spleen and lymph nodes. Had we not gone in, I would have lost him within 2 months. My vet was optimistic we could give him 3-6 with treatment. This guy is my world and I would try whatever we could to give him a chance, as long as he could tolerate it. Over the next 11 months he went though IV chemo, oral chemo, back to IV chemo when oral didn’t work, and then back to another oral. During all of that he never lost his happy demeanor or showed any sign of sickness whatsoever!

I’m so happy to report that last week he finished his last round of chemo with clear scans!! I couldn’t be more grateful to the techs, vets and EVERYONE who has a hand in helping/ending canine cancer; you have all saved my boys life!

So this year for Halloween it seemed fitting that he wear the superhero cape, because he truly is a superhero!

By Amanda Siebers and Milo