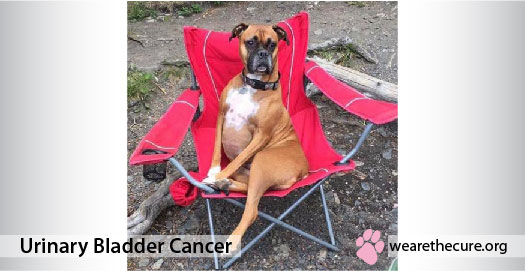 Description- Urinary bladder cancer accounts for approximately 2% of all reported malignancies in dogs. With more than 60 million dogs in the USA, deaths from urinary bladder cancer are increasing rapidly. There are various types of bladder tumors like squamous cell carcinoma (arise in the epithelial cells), adenocarcinoma (arise in the glandular epithelium), undifferentiated carcinoma, rhabdomyosarcoma (tumor of the striated muscle- form of fibers combined into parallel fibers like the skeletal and the cardiac muscles), fibroma (tumors made of fibrous or connective tissue. They can grow in any part of the organ that arise from mesenchyme tissues) and other mesenchymal tumors (lesions that arise from soft tissues) that occur less frequently. But invasive transitional cell carcinoma or TCC is the most common type of canine urinary bladder cancer. Most TCCs vary between intermediate to high grade papillary proliferative lesions. TCCs are mostly found in the trigone (smooth triangular region of the internal urinary bladder) part of the bladder. Breeds like Scottish terriers, Shetland sheepdogs, Airedales terriers, Beagles, West Highland white terriers and Wirehaired fox terriers are highly predisposed.

Causes- The cause of urinary bladder cancer depends on multiple factors. Exposure to topical insecticides and herbicides, obesity, cyclophosphamide administration and particular types of breed are believed to be the probable risk factors. In a vast majority of studies, female predilection has been found to be a predominant factor.

Symptoms- In dogs diagnosed with TCC, the wall of the urinary bladder is found to be thickened. Papillary lesions are also present. These can partially or completely lead to the obstruction of urinary tract in dogs. Recent studies have revealed the presence of lesions in both the bladder and the urethra. In males, prostate is also believed to be involved.

The rectal examination may reveal thickening of the wall of the urethra or trigone region of the bladder, enlargement of iliac lymph nodes, mass in the bladder or a distended bladder.

To avoid the risk of tumor seeding (spillage of tumor cell clusters and their subsequent growth at a site adjacent to the original tumor) through cystosyntesis (a procedure in which needle is inserted into the urinary bladder of an animal through the abdomen and a sample of urine is removed), urine may be collected by free catch or catheterization. A lot of care has to be taken while inserting catheter, because the slightest brush may rupture the diseased bladder or the urethral wall.

During cystonography, the bladder has to be distended. This is done by instilling 4-8 ml/kg of sterile saline into the bladder through a urinary catheter.

Ultrasonorgraphy is important in viewing the regional lymph nodes and metastases in other abdominal organs.

Histopathology (microscopic examination of tissues) is important, because in the urine of atleast 30% of dogs, neoplastic cells cannot be differentiated from reactive epithelial cells associated with inflammation. Methods for obtaining tissue for histopathologic investigation include cystotomy (incision into the bladder), cystoscopy (It is a diagnostic procedure that is used to look at the bladder [lower urinary tract], collect urine samples, and examine the prostate gland) and traumatic catheterization.

TCC has been occasionally found to metastasize to the bones. So, if there is an unexplained lameness, a side by side comparison of radiographs and a nuclear bone scan are necessary to rule out bone metastasis.

Surgery– Complete surgery is not possible due to the trigonal location and the urethral involvement of the lesion. Moreover, many dogs develop multifocal TCC on the bladder. In those patients where the tumor is located on the apex of the bladder, partial cystectomy (removal of a part of the urinary bladder) is recommended.

Surgery is generally used as an emergency, palliative process for debulking (removal of excess bulk of tissue from a lesion), inoperable tumors in dogs with distal urinary tract obstruction. Prepubic cystotomy (opening of a cyst or cutting into a bladder for the extraction of calculus) catheters that bypass urethral obstruction have been used on some dogs with poor results.

Radiotherapy– Radiation therapy is used to check the local growth of tumors, but it has many adverse effects like urinary incontinence (involuntary discharge of urine), cystitis (inflammation of the urinary bladder), pollakiuria and stranguria (difficulty with urination). Complications associated with pelvic irradiation have been noted in several dogs. Ten dogs were treated with a weekly course fraction beam radiation therapy along with mitoxantrone and piroxicam chemotherapy. They showed marked improvement. But the results showed a downward slide when treated with mitoxantrone and piroxicam therapy without radiation.

Chemotherapy– Administration of cisplastin combined with piroxicam has induced the highest percentage of remission in dogs. But this combination is believed to cause renal toxicity. It directly damages renal tubule cells and piroxicam may also interfere with renal blood flow. In one study, the combination of carboplatin and piroxicam resulted in the remission in 38% of cases. But the duration of remission and the median survival rate were relatively shorter. However, in a separate study, 35% of dogs benefited from piroxicam and mitoxantrone and showed a median survival time of 291 days. As a single agent, piroxicam has shown gratifying results.

The course of treatment should be decided based on the size of the tumor, the stage of the disease and the extent of metastasis. If the lesions are small in size and stable the current protocol should be continued. In the wake of complete remission, treatment is continued for another 4-8 weeks in the belief that microscopic traces of the disease would be eradicated. Some doctors recommend lifelong use of piroxicam. Treatment is, however, stopped if the ailment is found to be progressive or toxicity is detected.

Other therapies- Experiments on photodynamic therapy (PDT) are underway. PDT with 5-aminolevulinic acid (ALA) has powerful effects in destroying canine TCC cells in vitro (a technique of performing a procedure in a controlled environment outside of a living organism). ALA-based photodynamic therapy of TCC in five dogs induced tumor progression free intervals ranging from 4-34 weeks. It was also applied to a male dog with urethral TCC. This dog was found to be disease free even 1 year after treatment.

Supportive Care- Dogs with TCC are at an increased risk of contracting secondary bacterial infections. Urinanalysis and urine culture should be performed from time to time. If obstruction of the urinary tract occurs, catheterization, definitive anti-cancer therapy and antibiotics to reduce inflammation associated with secondary bacterial infection or surgical debulking are recommended. Prepubic catheters are sometimes inserted in dogs with urethral TCC and kept there for several months. A low-profile gastrotomy tube (feeding tube) has been used as a prepubic cystotomy tube to relieve urethral obstruction and achieve urinary diversion.

Prognosis- Dogs diagnosed with TCC eventually succumb to it, owing to the infiltrativeness and proliferativeness of the disease. However, many dogs live owing to factors like early detection, quick initiation of treatment, size of the tumor and the extent of metastasis. Several studies have shown median survival to be more than 6 months. Even with piroxicam, median survival has been found to be more than 1 year in 20% of dogs. The gravity of the disease at the time of diagnosis seems to heighten for younger dogs with prostate involvement and advanced metastasis. Advanced metastasis and glandular differentiation (appearance in a carcinoma of glands and gland-like elements which, indicates some maturation) in the histopathologic investigation at the time of diagnosis indicates poor prognosis.