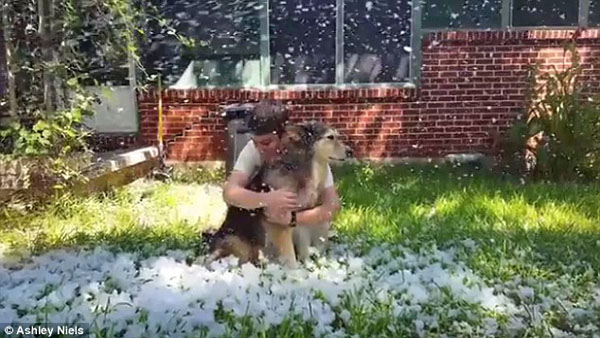 A doting dog owner who promised her dying hound one final day in the snow has hired a machine to create a blizzard in Texas.

Ashley Niels’ 12-year-old husky-German shepherd-chow mix, Spunky loved to play in the snow when they lived in Wisconsin.

And, last week, when Niels learned of her best friend’s fatal and untreatable form of canine cancer Hemangiosarcoma, she made him a promise, according to Inside Edition. 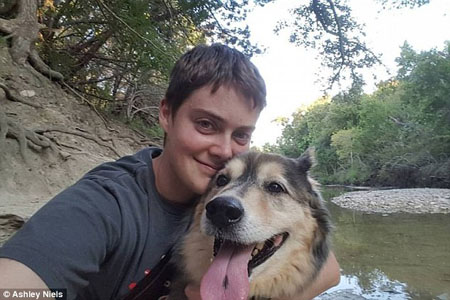 Spunky, the snow-loving dog spent four years with Niels in Wisconsin, where he was adopted by Niels as a puppy

Niels adopted him from a local shelter when he was a puppy.

‘He could spend hours in snow drifts and be just fine,’ she said. ‘He loved it. The colder it is, the happier he is. Unfortunately, Texas couldn’t give that to him.’

Last week, the veterinarian informed her that Spunky should be put down so he wouldn’t suffer from the cancer. 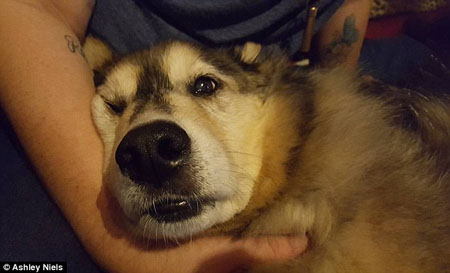 Niels’ co-workers and friends learned of what she wanted to give her dying pooch as his send-off, and rented a snow machine to help make that wish come true

Heartbroken by the news, Niels scheduled Spunky’s appointment to have him put to sleep the next day, but not before giving him a tiny blizzard.

Niels’ co-workers and friends learned of what she wanted to do for her dying pooch, and rented a snow machine to help make that wish come true.

She cuddled her longtime companion in their front yard as the snow fell around them.

Niels told Inside Edition that Spunky ‘was like “I’m not really sure what this is”‘ because the manufactured snow wasn’t cold.

‘I think he could see how excited I was, so he thought it was pretty cool,’ she said. ‘I think he felt all the love we were trying to show him.’ 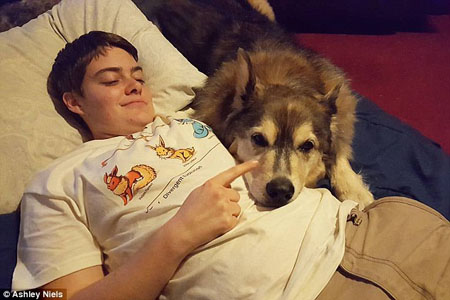 Heartbroken by the news, Niels scheduled Spunky’s appointment for the next evening, but not before giving him a tiny blizzard

In what may have been written in the stars, Spunky’s appointment with the veterinarian was canceled after the vet had a family emergency, Inside Edition reported.

Spunky started feeling better, even running a bit, seemingly in no pain.

But the veterinarian warned that this might happen if his body absorbed his internal bleeding, according to the site.

Niels knows the time for Spunky to rest is nearing. She said: ‘As long as he’s happy, I don’t really want to take that from him.’

She told Inside Edition that ‘you can just feel the love’.

Niels said she’s trying not to think about the end, and is enjoying spending ‘this extra-special time with him’.