My dog cured my depression 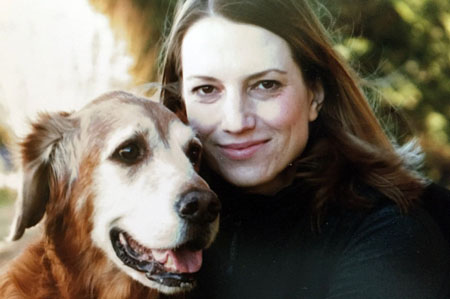 When Julie Barton’s depression hit its peak in the spring of 1996, it was a golden retriever puppy named Bunker who helped her see the positive side of life again. Here Barton, now 42 and author of the upcoming memoir “Dog Medicine” (Penguin Books, out Tuesday), tells The Post’s LINDSAY PUTNAMthe astonishing tale of the dog who saved her life.

I barely made it through the front door of my Upper East Side apartment when I collapsed on the floor. For months I had felt increasingly depressed — warped thoughts such as “Nobody loves you, you’re worthless, kill yourself” flooded my mind — and it finally culminated in my inability to do anything, even to move.

Julie Barton and Bunker in 2007, shortly before the dog died of cancer. Photo: Courtesy of Heather Knape

I lay there for a day before I called my mom, managing between sobs to tell her: “Something happened. I think I had a breakdown or something.”

Within 24 hours I had quit my publishing job, packed up all my belongings and moved back home to Ohio. My parents sent me to a psychiatrist, who diagnosed me with major depression and put me on Zoloft.

But when I got home from that first appointment, I thought there was something else that could help heal me: a puppy. 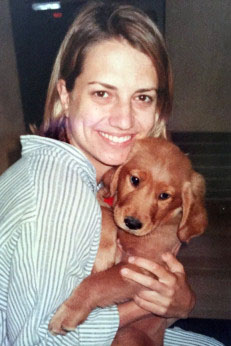 When I was a kid, the deepest peace I found was with my childhood dog. I would take him to my room and think, “This being loves me no matter what.” I felt so lonely that I believed just having a companion would help.

I answered a newspaper ad for golden retriever puppies, and when I found Bunker, it was like he’d been waiting for me. He sat right down at my feet and looked straight up at me. “This is the one,” I thought.

The next morning was the first day of my life. Instead of sleeping until noon, I was up at 6:45 a.m., playing with this incredible puppy who depended on me.

Soon after I brought Bunker home, I felt my depression returning, and realized that maybe this puppy wasn’t the magical cure I had hoped for. Then Bunker walked across the room, sat on my feet, leaned against my shins and looked up at me. That was the moment that I knew he understood me. So I let myself be as upset as I needed to be, knowing that Bunker would never question or judge what I was experiencing. That’s when the sadness began to dissolve.

Bunker gave me the strength to move out of my parents’ house and relocate to Seattle in September 1996, where I lived with three roommates and temped as a receptionist. When Bunker was almost a year old, he was diagnosed with severe hip dysplasia; the veterinarian recommended I put him down, but that wasn’t an option. If Bunker died, I would die, too. My roommates and I rallied together and raised the $4,000 needed for surgery by hosting “Bunker keggers” at our house. It was a long recovery, but Bunker made it through.

I ended up falling in love with one of my roommates, Greg. We married in 2000 and had a daughter, with Bunker always by our sides.

When I was pregnant with my second daughter in 2007, I found a spot of blood on the carpet where Bunker usually slept. I immediately took him to the veterinarian: Bunker’s lungs were filled with cancerous tumors, and he had just days to live. I had dreaded this day for years, and as he was put to sleep I thanked him for my life.

I worried what I would do without him, but the things I learned in my 11 years with Bunker have sustained me. If I feel sad, I slow down, take a walk and remember that I’m loved. Bunker cemented that thought in my mind.