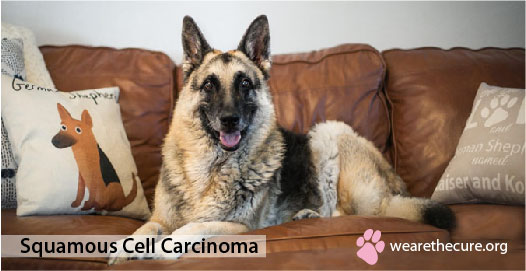 What is Squamous Cell Carcinoma?

Cutaneous squamous cell carcinoma (SCC) or actinic keratosis is a malignant tumor of epidermal cells in which cells show differentiation in keratinocytes (it is the major constituent of the epidermis, constituting 95% of the cells found there). It accounts for 5% of all cutaneous tumors found in dogs.

These tumors generally grow slowly, but are aggressive in nature. They, however, do not metastasize to the regional lymph nodes. They are usually found in those areas within the epidermis where there is a dearth of pigmentation, hair or a very sparse hair coat. The peak incidence of squamous cell carcinoma in the dog is between 6 and 10 years of age.

The breeds that are at increased risk include Keeshond, Standard Schnauzer, Basset Hound, Collie. The Boxer is, however, believed to be at a decreased risk. Short, coated dogs that spend a long time outdoors, also have a higher incidence of squamous cell carcinoma. No sex predisposition has been found.

There are several factors associated with the development of squamous cell carcinoma including prolonged exposure to ultraviolet radiation. Sunlight causes genetic damage of cells, (mutations in the DNA genome), but fail to repair the damaged DNA. Loss of an adhesion molecule called E-cadherin (protein present in the cells involved with the binding in other cells) induces these damaged epithelial cells to attack surrounding tissues. Weak immune system also induces the onset of malignancy. In dogs, the theory of exposure to sun is less obvious. It is believed that there may be some association with papilloma virus.

What are some of the symptoms of Squamous Cell Carcinoma?

Most cutaneous squamous cell carcinomas appear as firm, raised, frequently ulcerated plaques and nodules; sometimes they can be extremely exophytic (outwardly growing) and have a surface that resembles a wart. These usually develop on ventral abdominal, preputial (exocrine glands present in front of the genitals), scrotal, and inguinal skin in white-skinned, shorthaired breeds such as Dalmatians, Bull Terriers, and Beagles. The appearance may vary from time to time. The clinical signs usually depend upon the location of the tumor. For instance dogs with tumors on their feet may limp.

What is the prognosis of Squamous Cell Carcinoma?

There are two types of squamous cell carcinomas, that of the mouth and that of the toe. While both are classified as SCCs, the impact on your dog’s health can be wildly different depending on the specific type of cancer.

Cutaneous or skin carcinomas are generally locally destructive with infrequent metastasis (spread elsewhere). Any recurrence is usually seen within weeks to months.

Digital, nail bed tumors also referred to as “toe tumors” may recur in the same digit or in another after several months or years.

No sex predisposition has been observed. The rate of growth of these lesions is variable and depends upon the extent of the involvement of the underlying tissues. Metastases are not so common in subungual squamous cell carcinoma. It occurs via lymphatics to regional lymph nodes and lungs. Tumors arise on multiple digits, often on different extremities. They are grow slowly and are cured by amputation of the affected digit.

Studies however revealed that in certain dogs with subungual squamous cell carcinoma there was evidence of pulmonary metastasis at the time of diagnosis. Tumors sometimes also involve the bursa (fluid filled sac that provides cushion between the bone and tendons) of the digital flexor or extensor tendons.

The recurrence of tumor within the subcutaneous tissue at the amputation site bears testimony to the fact. Generally, all are darkhaired breeds, and a dark coat color has been associated with the development of subungual squamous cell carcinomas. Females have a slightly higher rate of occurrence and both the fore and hind limbs are equally predisposed to tumor development.

With subungual squamous cell carcinoma, There is frequent loss of the nail with secondary infection of the nail bed.

The initial form of this cancer appears as tumors in the animal’s toes and spread to other parts of the body in subsequent stages. Unfortunately, cancer of the dog’s toes and nails while rare is typically far more aggressive. It can quickly spread to the lymph nodes.

Clinically, this tumor resembles many other skin tumors. Loss of the nail is common when tumors arise in the nail bed and in this site; it resembles inflammatory diseases such as infections and foreign bodies.

For dogs surgical excision, like amputation of the involved digit or pinnae (outer projecting portion of the ear) is the treatment of choice, and margins of at least 2 cm are recommended. Clinical reports suggested that 95% dogs who underwent amputation, showed 1 year survival. If the tumors developed in other parts of the digit, the survival time of 1 year was in 60% of the cases. Excision may be supplemented with radiation and chemotherapy. For invasive neoplasms however, the 1 year survival time is less than 10%. Cryosurgery and hyperthermia may be helpful for local therapy especially in early lesions, but proper investigation has not been done to determine their effectiveness. Intralesional implant chemotherapy with 5-fluorouracil, cisplatin, or carboplatin along with retinoids and photodynamic therapy has been used with a fair amount of success.

Administration of etretinate for 90 days produces total regression of pre neoplastic lesions but for aggressive lesions partial response has been noted. In dogs treated with controlled localized radio frequency in combination with isotretinoin (another synthetic retinoid), better result was achieved. Using either 5-fluoracil and or/cisplatin for a minimum of 3 weeks produces partial or total regression of the tumors.

The nonsteroidal anti -inflammatory drug piroxicam, also known for its immunomodulating (adjustment of the immune response to a desired level) effects, has been given to dogs with nonresectable squamous cell carcinoma. Partial responses were noted in half of the 10 patients treated, with a resulting median survival of 150 days.

In those cases where surgery is not feasible alternative options like photodynamic therapy may be useful.

Caught early enough, your dog can make a full recovery from SSCC. However, approximately 1/3 of tumors in this site will metastasize even after amputation of the digit because they can spread up to the nerves when there is a complete surgical margin around the tumor. Tumors that histologically show well-differentiated cells may still metastasize and unlike oral squamous cell carcinomas, SSCC can aggressively spread to the lymph nodes and beyond.

When squamous cell carcinoma occurs in the mouth and throat, including the dog’s tongue, it is called oral squamous cell carcinoma. It is mostly located in the gums or tonsils. It also invades the bone in dogs. The metastatic rate for non tonsillar tumor in dogs is approximately 20%, but it is dependant on the site. The rostral oral cavity (located towards the oral or nasal region) has a low metastatic rate while the caudal tongue and tonsil have a high metastatic potential.

Clinical signs may comprise drooling (with or without blood), difficulty in eating, and halitosis (bad breath) due to orophayngeal obstruction. Depending on the site of the tumor, the dog may face difficulty in swallowing or lose excessive weight. Nagging cough may also be a case in point. Other symptoms include loose teeth, facial swelling, abnormal salivation and oral hemorrhage.

The cervical swelling associated with regional lymph node metastasis can be misdiagnosed as a primary thyroid tumor or lymphosarcoma. Therefore, whenever a dog exhibits firm, thick, ventral proximal semi-circular cervical swelling, a thorough examination of the tonsils should be done to rule out the possible presence of a primary tonsillar carcinoma.

Before planning out the course of treatment, a complete blood count and blood chemistry should be performed to reveal any concurrent disease. Thoracic radiographs should be taken to detect the presence of pulmonary metastatic disease. A complete oral examination should be performed under general anesthesia and radiographs of the mandible or maxilla should be taken to determine the degree of invasiveness of the lesion. Computed tomography (CT) is helpful in evaluating the extent of tumor involvement. An incisional biopsy should also be taken.

Treatment may involve surgery, radiation therapy, and/or chemotherapy. Treatment depends upon the location of the tumor and the degree of invasiveness and proliferation.

If the tumor hasn’t spread to other locations, surgery is the treatment of choice. The tumor, including the extensions into underlying tissue and bone, are removed enbloc. Sometimes even part of the jawbone has to be removed. Surgery is considerably successful if the pet has clean margins (the tumor was completely removed). Dogs function quite well with partial jaws. Even if surgery isn’t curative, surgery can extend survival.

Radiation therapy is beneficial if the tumor is unresectable, or if surgery can’t remove the tumor completely.

Chemotherapy may be added to therapy, depending on the circumstances.

The prognosis for oral squamous cell carcinoma entirely depends on the location of the tumor and metastatic rate. A complete cure is not possible unless diagnosed early. If the tumor is not located in the tonsils and has not metastasized, the prognosis is gratifying with surgery and/or radiation treatment. Tumors that originate in the tonsils are usually quite aggressive and have a poor prognosis. They tend to spread to regional lymph nodes. Tumors located in the rostral oral cavity are operable with a considerable chance of survival. Local recurrence is common with insufficient resection. The mean survival time is 15.8 months, with 80% of patients being clinically free of tumor at the time of their death. One study showed that 85% of the dogs were alive even 1 year after surgery.

Surgical margins greater than 1 cm (2 cm if possible) around the lesion are generally recommended. Remission of oral non-tonsillar squamous cell carcinoma has been reported in another limited study using piroxicam and carboplatin.

Site of the lesion seems to influence radiosensitivity (it is the relative susceptibility of cells, tissues, organs or organisms to the harmful effects of ionizing radiation).A recent study showed that dogs with maxillary (relating to the jaw or jaw bone) tumors had a longer response to radiation therapy (12 months) than ones with mandibular (3.4 months) or soft tissue tumors (1.8 months). Dogs with rostrally located tumors had longer survival times than dogs with caudally located tumors or tumors extending rostrally to caudally.