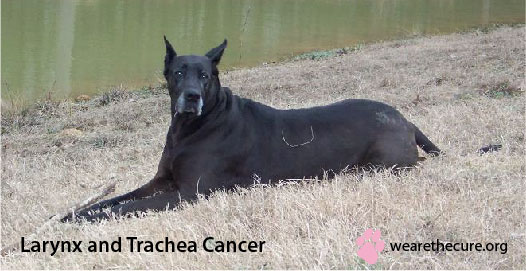 • Laryngeal oncocytomas are common in younger breeds. Reports suggest that these are usually solitary, protruding tumors found in the wall of the larynx with clinical upper respiratory obstruction. They are composed of cells with abundant granular cytoplasm (cytoplasm are part of the immune system and have somewhat nonspecific, broad-based activity) due to the presence of a large number of mitochondria (primary energy producers of the cell). So far, no breed predisposition has been reported. They are usually massive but less aggressive. They do not seem to metastasize.

• Osteosarcoma of the larynx is extremely rare in dogs. They may either follow radiation therapy for squamous cell carcinoma, or the larynx may be the site of metastatic osteosarcoma (primary bone cancer).

• Extramedullary plasmacytomas in dogs mostly develop in the gastrointestinal tract. The larynx is a very rare sight of involvement in any species.

• Chondrosarcomas are malignant tumors which arise in any place where there is cartilage (type of connective tissue). They usually develop from bones like the pelvis, leg bone or arm bone. Occasionally, they develop in the larynx.

• Mast cell lesions are among the most common tumors in dogs. Although the skin is the most common primary site for MCTs in this species, they can arise from anywhere in the body. When it arises in the larynx it is called mast cell tumor. The mean age is 9 years. Breeds like boxers, boston terriers, beagles, bulldogs, and schnauzers are predisposed.

On the other hand, cancer of the trachea consists of lymphoma, chondrosarcoma and squamous cell carcinoma.

They are as follows:

• Tracheal chondrosarcomas are malignant, slow growing, progressive, invasive tumors of the trachea. These tumors have no known cause and are extremely rare in small animal.

• Lymphoma is a type of cancer that affects the lymphatic system, which can have its origins in the trachea, or spread to them by a process called metastasis.

Tracheal polyps (a projecting growth from a mucous surface) and leiomyomas are also quite common. They usually develop from the cartilaginous rings (they help the trachea from collapsing during absence of air and also protect it) and are composed of cancellous bone (it is the spongy interior layer of the bone that protects the bone marrow) capped by cartilage (type of dense connective tissue). They mostly result due to malformations in osteogenesis (process of laying down of new bone material by osteoblasts [mononucleate cell that is responsible for bone formation]). In lymphoma and thyroid adenocarcinoma, the disease generally metastasizes to the larynx and the trachea. However, primary neoplasms of the trachea are uncommon in dogs.

Symptoms– The symptoms include change in voice or bark, intolerance to exercise or dysphagia (difficulty in swallowing), respiratory distress, drooling (when saliva flows outside the mouth), cyanosis (blue color in the mucous membranes) and harsh or noisy breathing. Patients with tracheal tumors may also exhibit nagging cough.

Diagnostic techniques– The diagnostic techniques include complete blood cell count (CBC), biochemical profile, urinalysis, chest and neck X-rays, aspirate cytology, endoscopy, surgical biopsy, rigid bronchoscope (it is a technique of visualizing the inside of the airways for diagnostic and therapeutic purposes), plain radiographs or a  tracheogram.

The laryngeal tumors are usually examined under visualization, because small samples may not give the correct result.

Tracheal tumors pose a huge diagnostic challenge. They can be only biopsied with the help of a fiberoptic instrument or a rigid bronchoscope. Sometimes surgical open biopsy may also be performed. Plain radiographs may also reveal a mass narrowing the lumen (it is the inside of a tubular structure like an artery or intestine). Computed tomography or magnetic resonance imaging may also help in the diagnostic process.

Treatment– If the laryngeal tumors are benign like rhabdomyomas and cysts, they can be removed successfully. But the preservation of laryngeal function is very important in this case.  Irradiation is also resorted to depending upon the radio responsiveness of invasive tumors. Chemotherapy with or without surgery may also be helpful.

For tracheal tumors vets generally resort to surgical extirpation if they are benign osteochondral tumors. Full thickness removal with end to end anastomosis (network of streams that both branch out and reconnect like the blood vessels) can be performed upto 3 or 4 rings. On an experimental basis, 50% of tracheal length has been removed with successful closure.

Prognosis- If the lesions are benign they have a good outcome. Most dogs with resectable oncocytomas, live more than 1 year. But information on the prognosis of malignant tumors is very low.