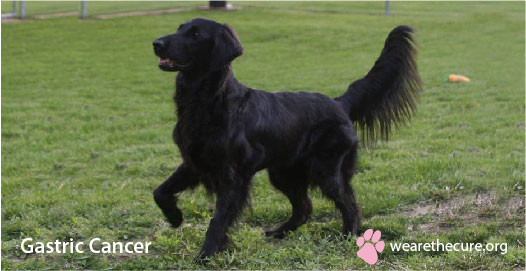 Description – Gastric cancer occurs in dogs mostly in the age group of 8-10 years or more. Though it is a very common type of cancer, it accounts for less than 1% of all malignant tumors.  Stomach cancer in dogs, if left untreated, will allow the tumors to grow and interferes with normal stomach function.  This increases the risk of gastric obstruction or tumor ulceration.

It can occur in any breed at any age, but it is most common in male dogs age 9+. Recent studies have pointed out that German Shepherds have a higher incidence owing to genetic factors. Other breeds shown to be predisposed to gastric carcinoma due to a prevalent of a mutated gene are Bouvier des Flandres, Groenendael, Collie, Tervuren, Standard Poodle and Norwegian Elkhound

Dogs which have been under the influence of nitrosamines (found in food stuffs preserved with nitrite pickling salt) over a prolonged period are believed to be more susceptible to the disease.

Signs and Symptoms of Stomach Cancer in Dogs –

Symptoms related to gastric cancer in dogs are often hard to detect. Symptoms are often not seen until this cancer has reached the advanced stages.  Always be on the lookout for lethargy and lack of socializing.

Irregular urination and bowel movements results from poor digestion, loss of blood and protein from the ulcer or generalized tumor cachexia. Duration of symptoms may vary from weeks to many months.

When doctors take positive or double contrast gastric radiographs, the images reveal a mass lesion extending into the lumen. Other tests include Fluoroscopy that may reveal motility alterations. Ultrasonography also proves useful in this case. For detecting larger lesions that can be biopsied, oncologists go for gastrocopy with a flexible endoscope. Several large samples need to be taken because most of the tumors have superficial necrosis, inflammation and ulceration. Some tumors are also sub-mucosal in nature, making biopsy difficult.

Instances like microcytic hypochromic anemia and occult blood in the faeces may help the oncologists diagnose gastrointestinal cancer in the dog. In many a cases, the liver enzymes are elevated due to obstruction of bile duct because of the disease.

It is normally very difficult to assess which stage the cancer is in without evaluating the liver and all the abdominal lymph nodes. This can be done only through surgery. It could be either curative resection or wide partial gastrectomy or gastrojejunostomy followed by a gastroduodenostomy. Doctors try to avoid complete gastrectomy since the chances of survival are bleak. In some instances, the lesions become obstructive thus making surgery difficult. In these cases, doctors resort to palliative gastrojejunostomy to allow the passage of food into the intestine. Even this procedure is not bereft of its disadvantages, since the mortality rate is very high.

Chemotherapy generally begins one week after surgery to ensure that all the cells are killed. A common chemotherapy protocol is chemo (Adriamycin) every 2 weeks for 5 treatments and then weekly (Cytoxan chemotherapy, along with daily Doxycycline (for antiangiogenesis) and Piroxicam (immune support as a COX2 inhibitor) and monthly (Vincristine) treatments.

It may result in some stomach discomfort including upset stomach, diarrhea and vomiting.

When diagnosed stomach cancer in dogs is usually at an advanced stage. Therefore the chances of recovery and prognosis are usually poor. The median survival in gastric adenocarcinoma is 2 months. In palliative bypasses it is between 1-6 months.