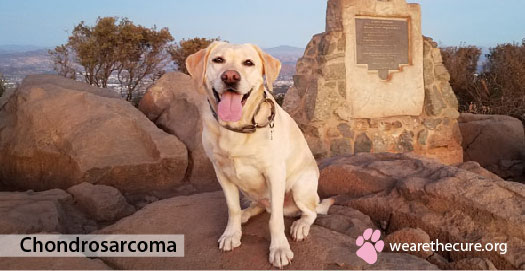 Description – Chondrosarcoma is a malignant neoplasm accounting for 5%-10% of all primary bone tumors reported in dogs. When a primary chondrosarcoma originates within a bone organ (organs of the skeletal system) it is called central or medullary chondrosarcoma but when it develops in the periosteum (membrane lining the outer surface of all bones) it is known as peripheral chondrosarcoma.

The tumor can develop in the nasal cavity, ribs, pelvis, extraskeletal sites like mammary gland, heart, valves, aorta, larynx, trachea, vertebrae, facial bones, digits, and penis. Central chondrosarcoma of long bones may infiltrate the cortex and supporting layers of the reactive bone. It may also occur in the appendicular skeleton of dogs including sites prone to developing osteosarcoma.

The nasal cavity on the other hand is also highly susceptible to developing chondrosarcoma. The tumor fills the nasal cavity by destroying turbinates (long narrow, curled bone shelf which protrudes into the breathing passage of the nose). Nasal chondrosarcoma may metastasize to adjacent sinuses or invade overlying bone and penetrate adjacent soft tissues. However, chondrosarcoma generally does not metastasize rapidly. But when it does the common sites that come within its ambit may include lungs, kidney, liver, heart and skeleton. The metastatic rate in dogs is 20%.

The tumors of medullary origin are most commonly found in dogs. Medium to large breeds like Boxers, German Shepherds and Golden Retrievers are at an increased risk of developing the disease. It is most frequent in middle aged to older dogs. However, no sex predilection has been reported so far.

Symptoms – Symptoms depend upon the site of skeletal involvement. In case of nasal chondrosarcoma, the signs may include sneezing, unilateral and sometimes bilateral purulent (pus), bloody discharge and nasal obstruction followed with bone destruction. Bone deformity may occur sometimes.

Chondrosarcoma of the vertebrae leads to compression of the nervous tissue but there are no visible signs. Rib tumors on the other hand are not so painful unless there is a pathological fracture (bone fracture caused by a disease in the body). These tumors grow rather quickly and some part of the tumor mass protrudes into thorax and causes some amount of pulmonary atelectasis (medical condition in which the lungs are not inflated). Sometimes large pelvic tumors may cause lameness in the hind limbs of dogs.

Physical examination is essential for evaluating the general health of the dog and also for detecting other illnesses if there is any.

The orthopedic examination is mandatory for assessing the affected bone and also to rule-out other causes of lameness. Sometimes, it is also important to find out if the dog would be able to manage on 3 legs where amputation is a potent possibility.

Blood tests are important for evaluating the general health of the dog before charting the course of treatment.

Also, the assessment of an enzyme called alkaline phosphatase in the serum biochemistry screening provides information on postoperative prognosis.

Radiographs, bone scans, and advanced imaging like CT or magnetic resonance imaging of the limb should be performed for assessing the extent of infiltration of the tumor.

Sometimes, however, due to radiopacity, radiolucency or increased radiodensity of certain tumors, it is very difficult to differentiate among osteosarcomas, chondrosarcomas and sarcomas. Under these circumstances a biopsy becomes inevitable for reaching a definitive diagnosis. However, the tumor is usually advanced by the time it is detected.

Treatment – Chondrosarcoma is amenable to surgery because a reliable adjuvant chemotherapeutic agent does not exist for this type of cancer. Although it is resistant to radiation therapy, there have been reports where responses to coarse-fraction radiation protocols were achieved.

Tumors in Domestic Animals – Donald J. Meuten, DVM, PhD, is a professor of pathology in the Department of Microbiology, Pathology, and Parasitology at the College of Veterinary Medicine, North Carolina State University, Raleigh