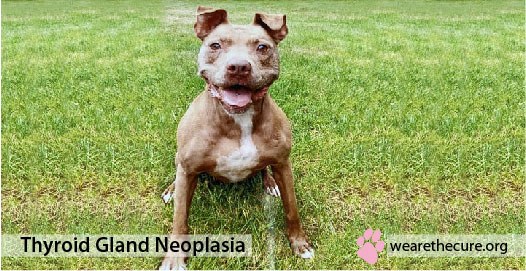 Description – Thyroid gland neoplasia accounts for 1.2% to 3.8% of all tumors reported in dogs. They can be classified according to their follicular origin into papillary, follicular, compact or anaplastic. Follicular and compact subclasses are most frequently found in dogs.

Breeds like Boxers, Golden Retrievers and Beagles are highly predisposed. Thyroid gland tumors are most commonly seen in older dogs. However, no gender predilection has been reported so far. The lobes of the thyroid gland are also severely affected. On rare occasions ectopic thyroid tissue (abnormal migration of thyroid tissue during embryonic development) can give rise to lesions in the tongue, ventral neck, cranial mediastinum and heart base. Thyroid gland tumors are quite aggressive as they eventually metastasize in approximately 80% of the cases.

The metastatic sites may include lungs and regional lymph nodes comprising retropharyngeal (lymph node found behind the upper part of the pharynx in front of the arch of atlas), cranial, cervical (lymph nodes found in the neck) and mandibular (lymph node found near the jaw) lymph nodes. However, at the time of initial presentation only, metastasis is reported in approximately 35-40% of cases.

Causes – Like most cancers the etiology of thyroid gland neoplasia is also unknown. But there are certain factors which have been thought to contribute to the growth of thyroid gland tumors like thyroid stimulating hormone (TSH), thyroid irradiation and lack of thyroid hormone supplementation.

Symptoms – In dogs the tumor presents itself as a palpable ventral cervical mass. Some of the less common clinical signs may include coughing, rapid breathing, dyspnea (shortness of breath), dysphagia (difficulty in swallowing), dysphonia (disorders of the voice) and facial edema (build up of fluid in the tissues of the face). Sometimes acute hemorrhage occurs due to compression of the cervical vasculature. In dogs with hyperthyroidism the other clinical symptoms may include polyphagia (excessive hunger), polydipsia (excessive thirst), polyuria (urge to urinate more frequently) and muscle wasting (a wasted muscle is one which becomes thinner).

The cytologic or histological evaluation technique of thyroid mass is not foolproof as it fails in determining the origin of the tumor in more than half of the affected cases. Also due to the high vascular density of the malignant tumors and hemodilution (increase in fluid content of blood), aspiration methods aimed at reducing the likelihood of hemodilution and inspection of  the feather edge result in a differential diagnosis like endocrine tumors. Moreover, the increased vascular density poses risk to large core needle biopsy methods.

Cervical ultrasonography is useful in assessing the origin, vascularity and aggressiveness  of the thyroid mass.

The retropharyngeal and cranial lymph nodes are generally examined for metastatic disease.

Treatment – The course of treatment depends upon the size of the tumor, the extent of infiltrativeness, the presence or absence of metastasis and signs of thyrotoxicosis (condition in which the thyroid gland produces excessive hormone). Thyroidectomy (surgical removal of the entire thyroid gland) is the treatment of choice for non-metastatic tumors only. If the disease is found to affect even the adjacent structures like vasculature (arrangement or distribution of blood vessels), recurrent laryngeal nerves, parathyroid glands (small endocrine glands in the neck that produce parathyroid hormone) and sometimes the larynx and the trachea, surgery is avoided.

If the disease aggravates to life-threatening proportions, it becomes very difficult to surgically extirpate the lesion without causing damage to laryngeal nerves that results in laryngeal paralysis, aspiration pneumonia (develops due to the entrance of foreign materials into the bronchial tree) and ultimately death. Sometimes vascularity of the tumor and infiltration into the adjacent blood vessels and coagulopathy (defect in the body’s mechanism for clotting blood) may lead to acute hemorrhage.

Thyroid carcinomas that are not amenable to surgery can be controlled with external beam radiation therapy. However, for dogs with gross metastasis, hypofractionated radiation therapy may provide temporary succor. The scope of chemotherapy has been evaluated in the management of bilateral, metastatic tumors with varying results. Dogs  which have a greater susceptibility for developing metastatic disease are treated with systemic chemotherapy or definitive chemotherapy.