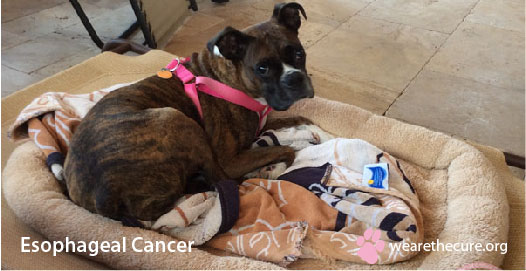 Description– The occurrence of esophageal cancer in dogs is very rare. It accounts for even less than 0.5% of all canine cancers. So far it has been reported only in older animals. There is no sex or breed predilection. The most commonly reported primary esophageal tumors include sarcomas (fibrosarcoma and osteosarcoma), squamous cell carcinoma and leiomyosarcoma. Infestation with the parasite spirocerca lupi (they are bright red worms, generally located within nodules in the esophageal, gastric, or aortic walls) can cause osteosarcoma of the esophagus. If the lesion becomes massive and cancerous, the dog usually develops spondylitis (degenerative condition in one or more joints of the spinal column), enlargement of extremities as in hypertophic osteopathy (It is characterized by new bone formation on the outside of the diaphyses [mid section of the bone]). Cancer that begins in the flat cells lining the esophagus are called esophageal squamous cell carcinomas.

Sometimes benign tumors like leiomyoma and plasmacytoma may also occur. Metastatic lesions are thrice more common than primary ones. They are usually paraesophageal (beside the esophagus) tumors of the thymus (a lymphoid organ located in the superior mediastinum and lower part of the neck and is necessary for the development of immunological function), heart base, thyroid as well as mammary adenocarcinoma and lymphoma.

Leiomyomas are benign tumors that develop from smooth muscles in the gastrointestinal tract. Most of them develop from the muscularis propria (deep muscular layer), with a smaller percentage growing from the muscularis mucosae (thin layer of smooth muscle). Esophageal leiomyomas are solitary, slow-growing tumors, although multiple tumors can occur. In dogs, leiomyomas are most commonly found in the stomach at the gastroesophageal junction (the junction between the stomach and the esophagus).

Histologically, leiomyomas are different from leiomyosarcomas with respect to a lower number of mitotic figures (cell division) as well as the absence of necrosis (premature death of cells and living tissues). Low-grade leiomyosarcomas may behave similarly to leiomyomas in dogs after marginal excision (removal of the entire lesion and only a small margin of surrounding tissue).

Leiomyosarcoma is an unusual tumor arising from various sites like the genitourinary tract, gastrointestinal tract, peritoneum, soft tissues, blood vessels, lungs, liver et al. It contributes 1-2% to all malignancies affecting the gastrointestinal tract and is rarely found in the esophagus.

Symptoms– The symptoms of esophageal cancer generally include debilitation (weakness), weight loss, dysphagia (pain on swallowing) and regurgitation (reverse circulation of blood in the heart due to defective functioning of the valves) of undigested food. Pneumonia, secondary to aspiration (removal of a sample of fluid and cells through a needle) may also be noted. Hypertrophic osteopathy (bone disease secondary to infection in the lungs) may occur frequently in spirocerca-lupi-induced sarcomas. They usually affect the caudal thoracic esophagus and can be associated with thoracic spondylitis and a microcytic hyperchromic anemia (It is a blood disorder characterized by abnormally small red blood cells which contain abnormally high amounts of hemoglobin).There is also a reduced number of red blood cells and neutrophilia (this is a condition in which the dog has an overproduction of neutrophil granulocytes [most abundant white blood cells] in the blood).

Treatment– The vets usually go for plain radiographs. Due to complete or partial upper-gastrointestinal obstruction, radiographs may reveal retention of gas within the esophageal lumen (a cavity or channel within a tube or tubular organ), a mass or esophageal dilatation (it is the technique used to stretch or open the blocked portion of the esophagus) close to the cancer.

A positive-contrast esophagogram (radiograph of the esophagus) with or without the fluoroscopy will reveal a stricture or mass lesion in the lumen. Esophagoscopy allows the vet to get a clear picture of the tumor which is usually ulcerated. Biopsies reveal necrosis (premature death of cells) and inflammation. However, biopsies of leiomyomas yield minimal results since they are movable, circumscribed submucosal masses. Sometimes advanced CT or MRI may be helpful to determine the extent of the disease. Open surgical biopsy via thoracotomy (incision made into the chest to gain access to the thoracic organs), or cervical exploration is another way of collecting tissue for diagnosis.

The metastatic nature of the disease makes therapeutic options non-viable. Intrathoracic surgeries are attempted, but with no result. For tumors located in the caudal esophagus or cardia (opening of the esophagus into the stomach), gastric advancement through the diaphragm can be attempted.

There are different procedures to partially replace the resected esophagus like microvascular transfer of colon or small bowel. But theories substantiating their efficacy as potential options for treatment remain inadequate. Chemotherapy has not been attempted properly. Radiation is sometimes used to treat cervical esophageal cancer, but for treating intrathoracic esophageal cancer, it cannot be used because of the intolerance of surrounding normal tissues like the lung and heart. Short-term relief can be achieved through esophagotomy (making an incision into the esophagus for removing any foreign substance that obstructs the passage) or gastrostomy (construction of a permanent  opening from the external surface of the abdominal wall into the stomach for inserting a feeding tube). Thoracotomy or celiotomy (incision of the abdomen) may be attempted in case of benign leiomymomas of the esophagus or the cardia.

Prognosis- The prognosis is not so good except for non-malignant lesions or lymphoma because of the poor resection options and the high rate of metastasis.