These days dealing with canine cancer can be frightening. You have statistics. You have your Veterinarian explaining what the cancer can do and what the prognosis is.

We believe at times like this, one also needs HOPE. It’s our belief that the survivor stories on these pages will give you just that, HOPE that your sweet pup can win the battle.

Together, We Are The Cure

Would you like to share your survivor story for our supporters to give them hope.  If so please email us at suggestions@wearethecure.org and please send your dogs story, name, your name and a picture.

Gary Nice
Founder and President of the NCCF 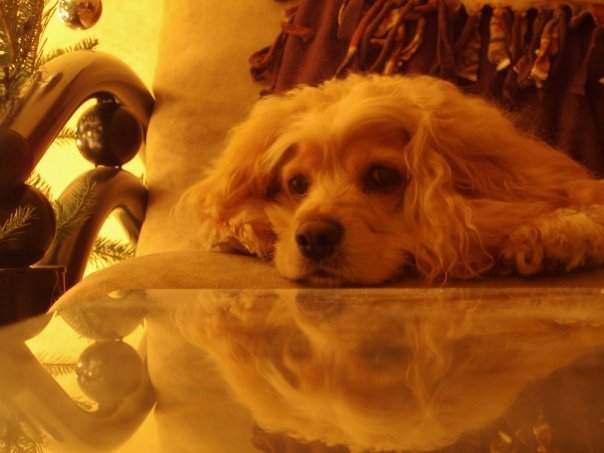 I came home from work on a Friday evening and Mia would not eat her dinner. Mia is a Cocker Spaniel, any one who knows the breed must know how I was immediately alarmed. Mia never misses a chance to eat, no matter what the offering. I took her to the ER Vet and after an x-ray, thry discovered a blockage in her small intestine. The Vet was thinking a ball or sock, etc., but Mia liked food, she did not eat inanimate objects. They decided they should open her up. The thoughts running through my head were, ‘I hope my underwear is not what they pull out’. Alas, the Vet called during the surgery and said her intestines ruptured while they were in there and what was there was not fabric, but a tumor. They removed about a foot of her intestines and cleaned her out the best they could. He said a lymph node looked ‘iffy’ but they did not want to take it because of chance of infection. She was touch and go for 2 days. I was a mess, and when the news came that they removed adenocarcinoma from her small intestine and she probably only had 2-4 months to live, the only thing I could think is I did not want her to die there. They released her to me with some antbiotics and pain killers. I set up a futon mattress on the floor of the living room, spread Wee Wee pads all over it and proceeded to lay with her for the rest of the week. The Vet gave me all the instructions for the medications, but what I neglected to find out is how to feed her. She had not been eating in ICU, but when she arrived home, all she wanted was to eat. I researched many holistic studies on what to do to fight the cancer in her body, since chemo was not an option. I read that Grain free was the way to go, so I began her diet regimen. When we returned, a week later, to have her staples removed, the staff was astonished! I was then told that none of them expected her to survive the peritonitis. She is amazing! That was two years ago, 3/23/2009. She is still frisky, lovey, mushy and, of course, food driven. She is now 10 years old and my miracle girl! When I thought I was going o make her comfortable for a few months, two years later, I am overjoyed that I never gave up hope and she never gave up fighting! I am now prepared for whatever happens with her, being given so much extra time. 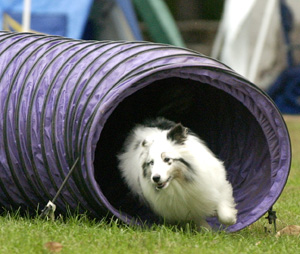 Bryce was diagnosed with Multiple Myeloma in April of 2008, after routine bloodwork revealed an abnormality in his protein values. There were no bone lesions, however it was all over his spleen and his liver. On the awful day I was given his survival prognosis (540 days if I went the chemo route (Melphalan and Prednisone, aka the MP protocol), 220 days on Prednisone alone) I remember standing there dumbstruck thinking “This just can’t be!” Having had a very bad experience with chemo in another dog, I opted to try holistic treatments first. I wish I could say they were a great success – they were not. Bryce kept getting sicker and at the end of that year I decided to start the chemo. Most dogs respond quickly to this, Bryce did not. However after the nerve-wracking initial couple of weeks, he began to respond and the meds steadily chipped away at his disease. He had no side effects from the chemo, we did have to reduce his prednisone dosage due to stomach upset. Bryce has always LIVED for doing agility, so I decided from the very start that I would let him run as much as he wanted to for long as he wanted to do it. A year after we started chemo, Bryce was declared to be in clinical remission. A week after that, he earned his CPE C-ATCH (CPE agility championship.) March of 2011 marks three years since we discovered his cancer – in that time he has earned multiple titles and awards in AKC, CPE and NADAC agility, including most recently his CPE CH-JU (jumpers champion) and his NADAC 1000 Lifetime Points award. He’s semi-retired now due to some back problems and aging vision, but when we run he still pulls me to the start line with great enthusiasm, tail in the air, having the time of his life. He’s not “cured” but has remained on a maintenance dosage of his medications which so far have kept his disease under control. Most importantly, I cherish that he’s becoming something I never thought he’d get to be back in 2008: A very, very spoiled old dog! 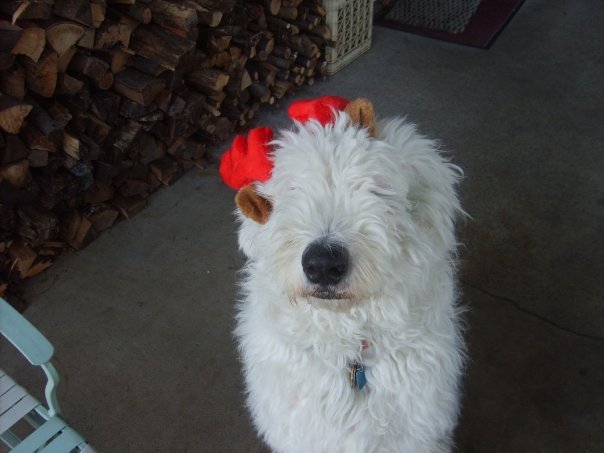 In Feb. of 2009 my Old English Sheepdog Cole had a huge lump on his hind leg after many doctor appointments he was diagnosed with cancer, after weighing all the options and finding a wonderful orthopedic surgeon we opted of removal of the leg in April of 2009. Cole was only 2 1/2 years old, and at 100 lbs was so concerned about his being able to live a healthy life, however he bounced right back was a trooper through everything and 2 years later is healthy and happy and cancer free!!! 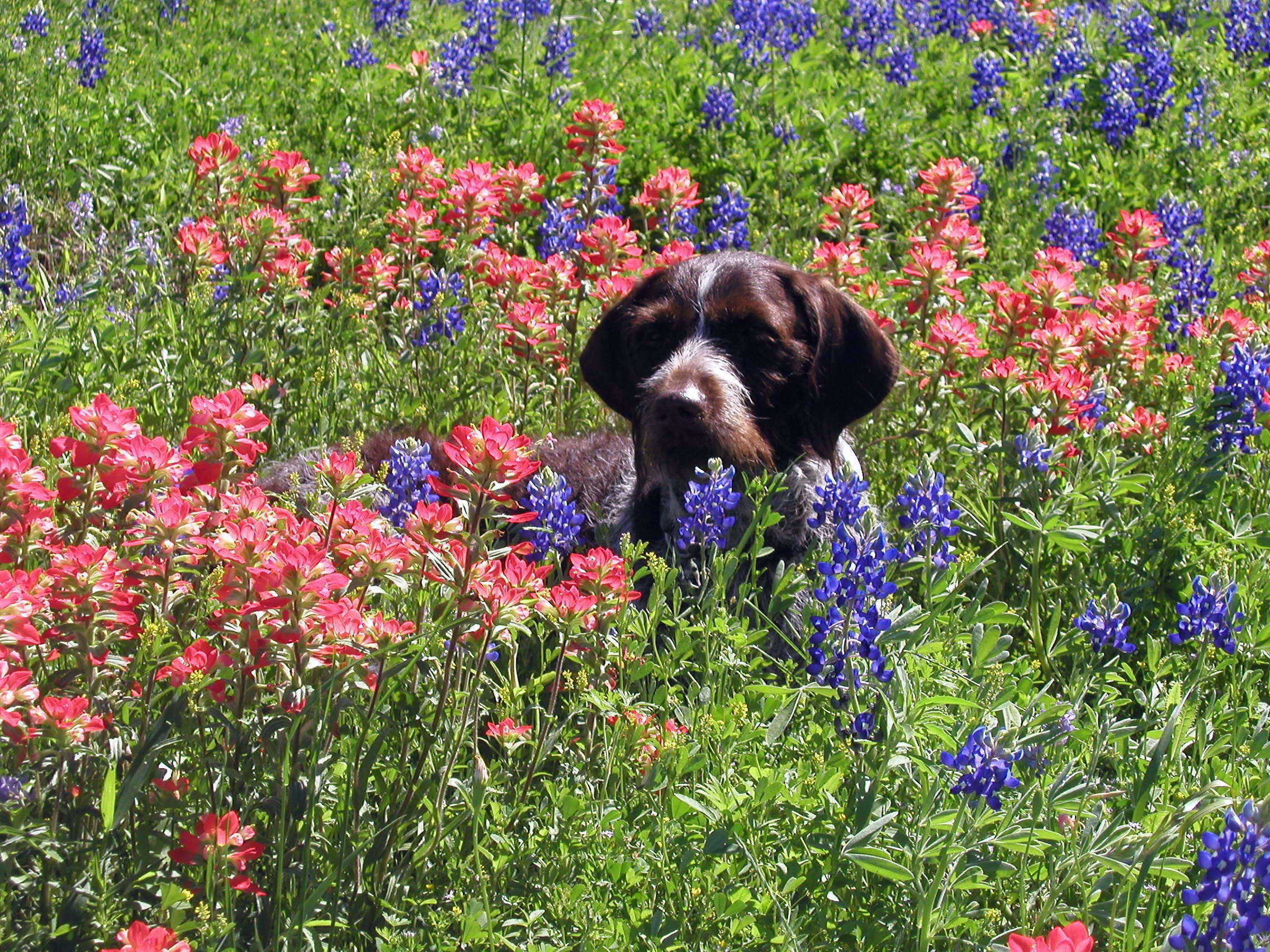 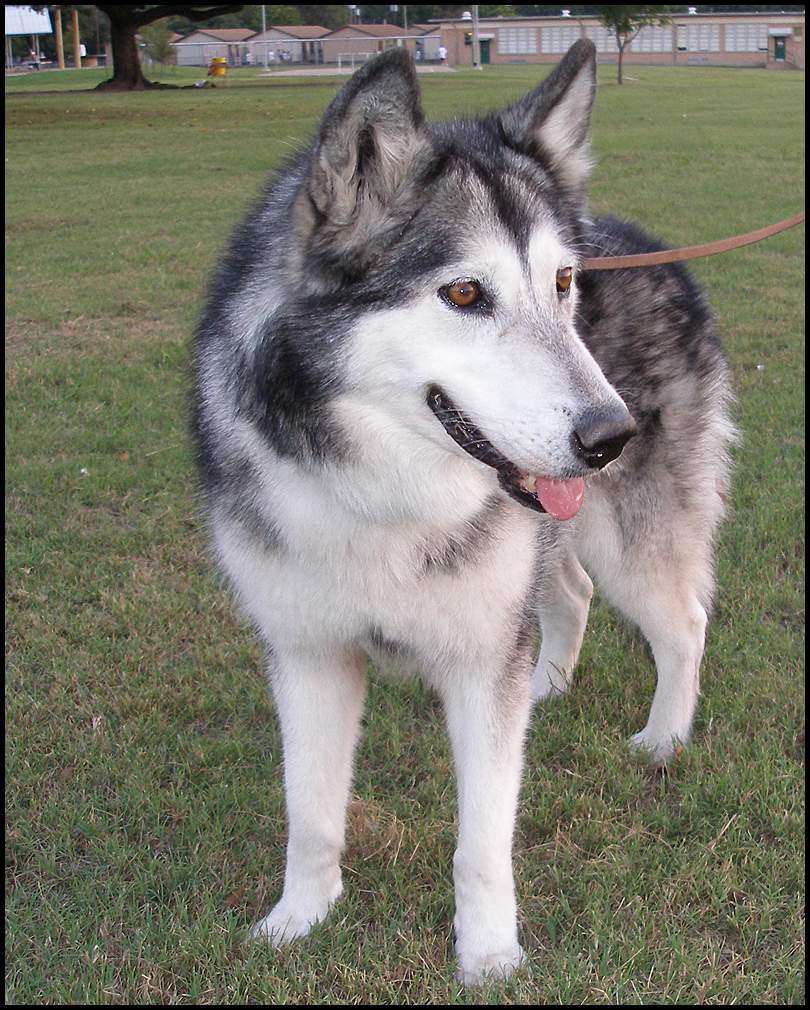 Vivie, an Alaskan Malamute, was recently found to have a malignant tumor on a breast. She underwent surgery in May 2011 and we are hopeful that it was removed in its entirety. The tumor was discovered during a casual belly rub and served as a reminder to do breast exams on all females every month! 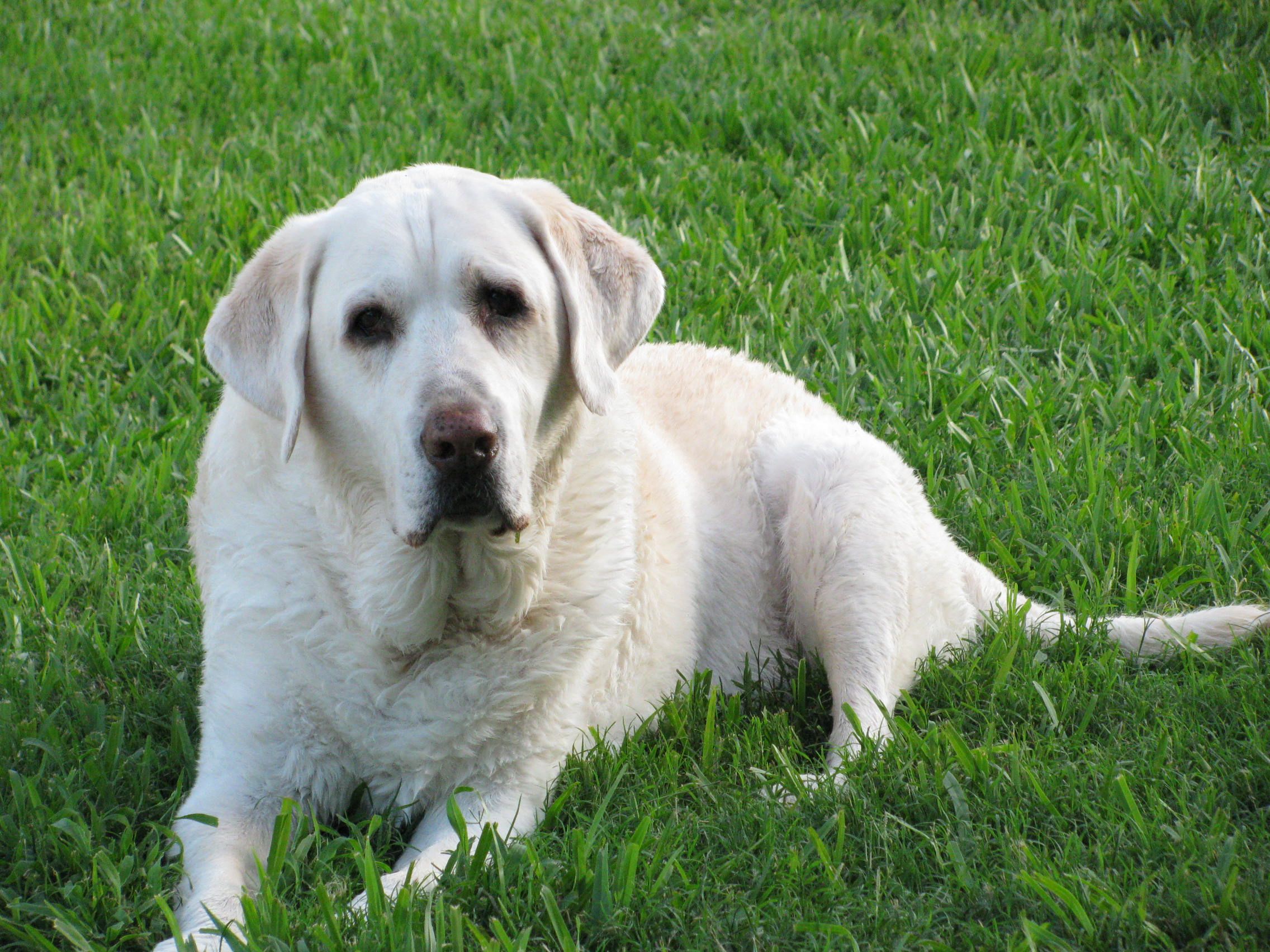 Our gentle giant, Harley, was diagnosed on 8/17/06 with intestinal lymphoma. He was 6 years old at the time and previously very healthy. He had surgery to remove the tumor and 6 inches of his intestines. The prognosis was not good as the vet said it was likely that they weren’t able to get all of the affected tissue. The previous year we lost our chocolate lab, Buddy, to lymphoma after just 40 days of chemotherapy. Needless to say, we were devastated, heartbroken and somewhat resigned to the seemingly inevitable outcome. We chose not to give him chemotherapy and just to use prednisone as palliative care. When he went into surgery he was a very healthy 102 lbs. Over the next few weeks, he got down to 88 lbs. Fast forward four months to January 2007…our family relocated 2,000 miles away all the while thinking that Harley wouldn’t be with us much longer. However, when we got to our new home, we visited his new oncologist. His blood levels and ultrasound looked great. The oncologist couldn’t believe he had only been on prednisone and doing so well. His weight was back up to 100 and he had great energy. We decided to start him on a low-dose of chemo — chlorambucil. Fast forward 4 1/2 YEARS… Harley is still with us and doing amazingly! He visited the oncologist every 3 months for blood work and ultrasounds for the first two years and then every 6 months for the next two years. In February 2011, our oncologist recommended taking him off the chlorambucil. She said it was like having a person on chemo for 35 years! The chlorambucil is such a low-dose she said that it would have come back already even when he was on it. It was hard to let go of that peace of mind — didn’t want to change anything since everything was working — but we ended up taking him off. He has been cancer-free and off chemo for 6 months now! This picture is Harley after a swim in the pool last week. He will be 12 years old in October which means almost half of his life he has lived as a lymphoma survivor. Had you asked me in August 2006 if there was any hope, I most likely would have given you a different answer. Now I know that miracles do happen and every dog is different! Please know that there IS hope! Who knows if your dog will be one of those special cases who will beat the odds? My advice to you is to enjoy each day you have with your pup and be thankful for every single second! 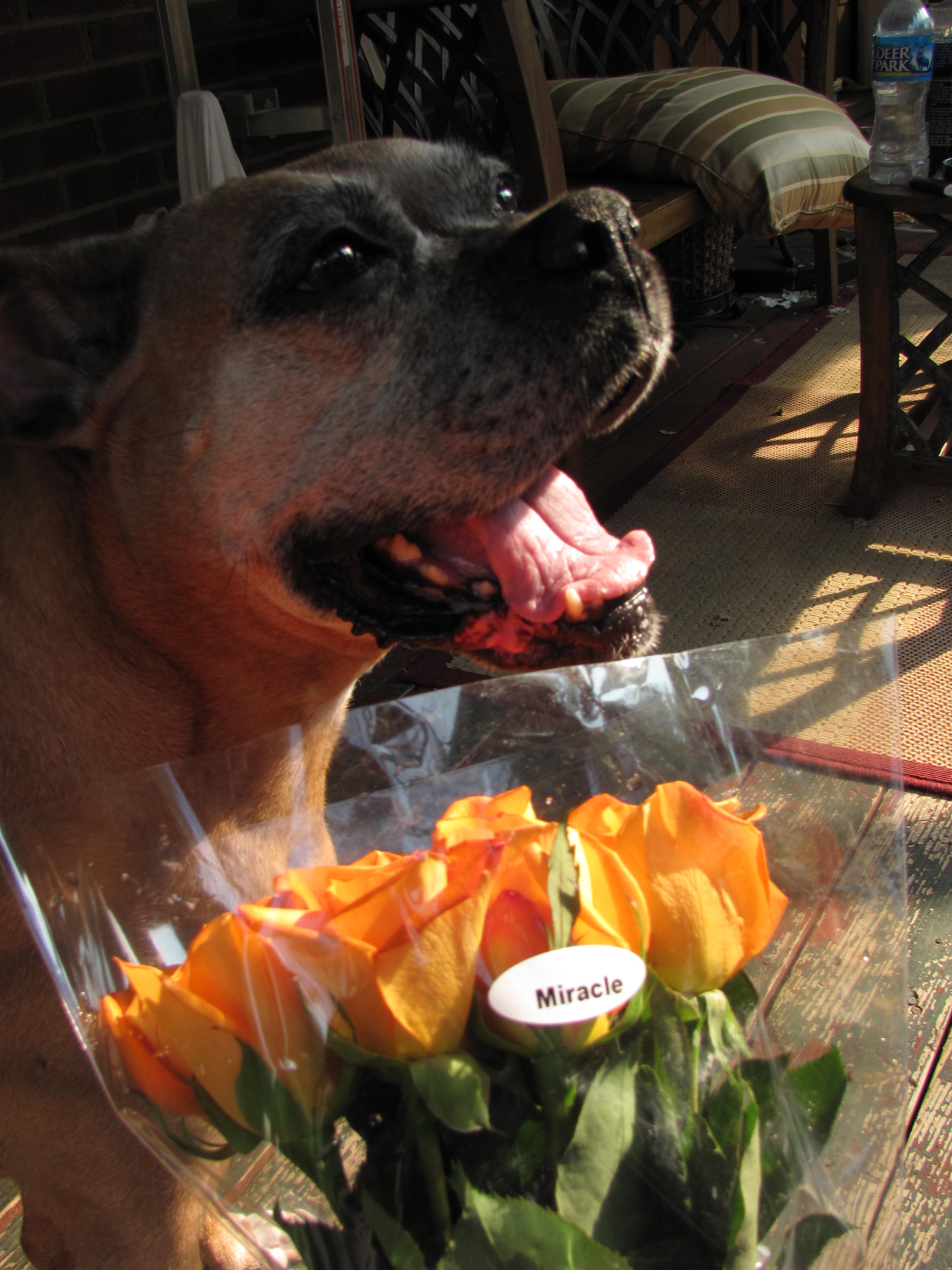 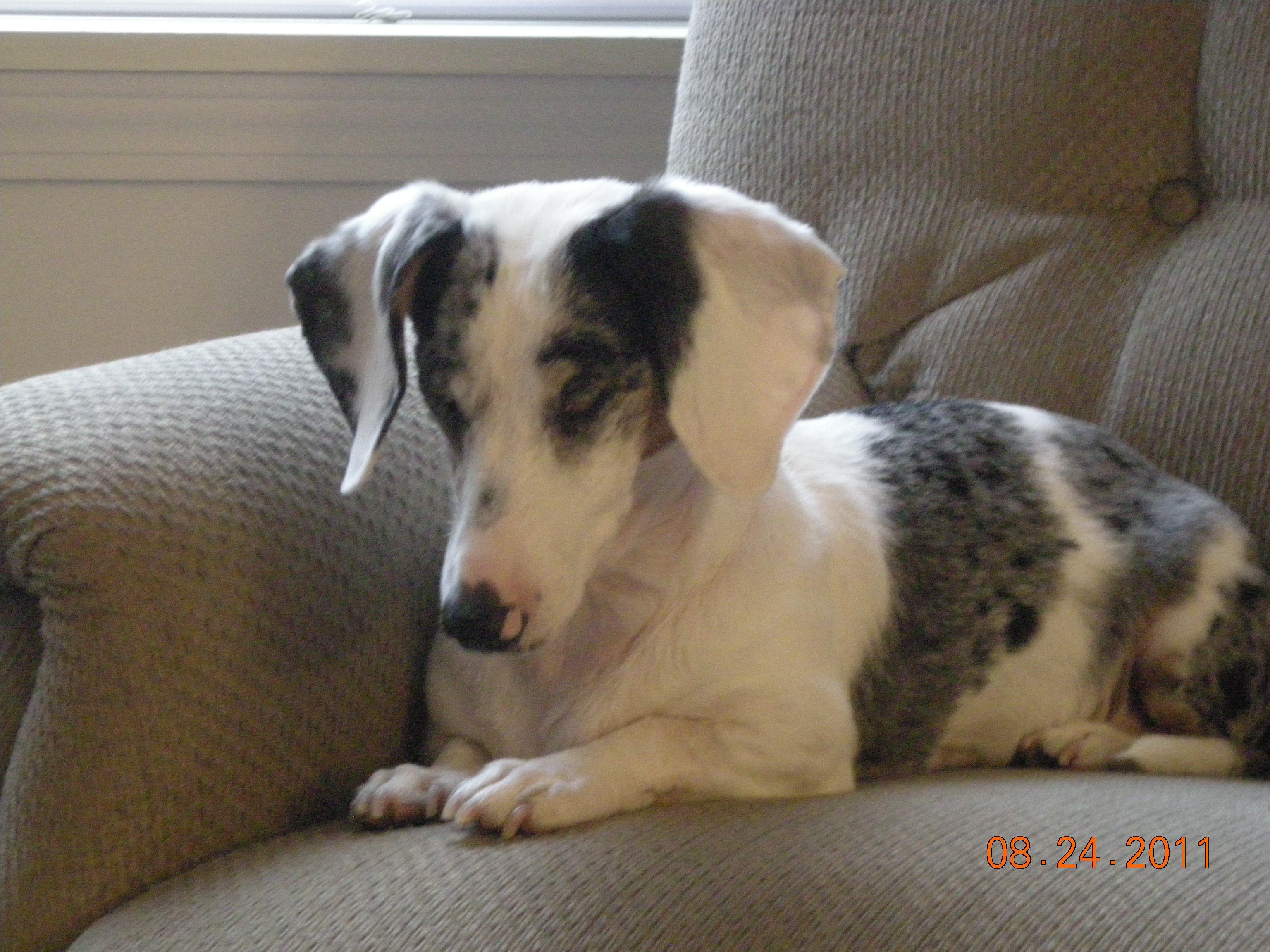 Mimi is our blind double dapple dachshund that we adopted in 2008 when she was 7 years old. She was born blind, but has absolutely no problems getting around. Her hearing and sense of smell have more than made up for her inability to see. In 2009, the vet found a tumor on her anal gland. The tumor and anal gland were removed and a biopsy was done. The test results confirmed our fears – the tumor was an anal gland adenocarcinoma. At the time, blood tests were normal, and the surgeon told us that he was very sure that he had gotten all of the tumor. Accordingly, we didn’t pursue any further treatment. In 2010, almost exactly one year later, we noticed that the tumor had returned. We opted to have this one removed as well. After the surgery, which was successful, we weighed our options as to whether chemotherapy was appropriate. We considered that the chemo could make Mimi very sick, and that it might not be successful in the end. We also considered the fact that doxies tend to be a very long-lived breed, and that living to 15 or 16 years was fairly commonplace. We also took into account the fact that Mimi was (and remains) a very healthy, alert and active dog, even at the age of 10. Furthermore, we knew that if the chemo made her too sick, we could stop it, because we did not want her to have to be so miserable without knowing why. We decided that we would start the chemo treatments, and see how they went. Mimi went through a chemo protocol alternating between two different drugs for 6 treatments, one every three weeks. She was an awesome patient, and had very few bad reactions to the drugs. There were about two episodes where she was pretty sick, to the point where she didn’t even want to eat. However, the doctor gave her Cerenia to control the vomiting, which definitely helped. Ultimately, Mimi completed her chemo regimen, keeping her ever-sunny disposition firmly intact. She has been doing quite well, and we hope that she has many years left to boss us around. 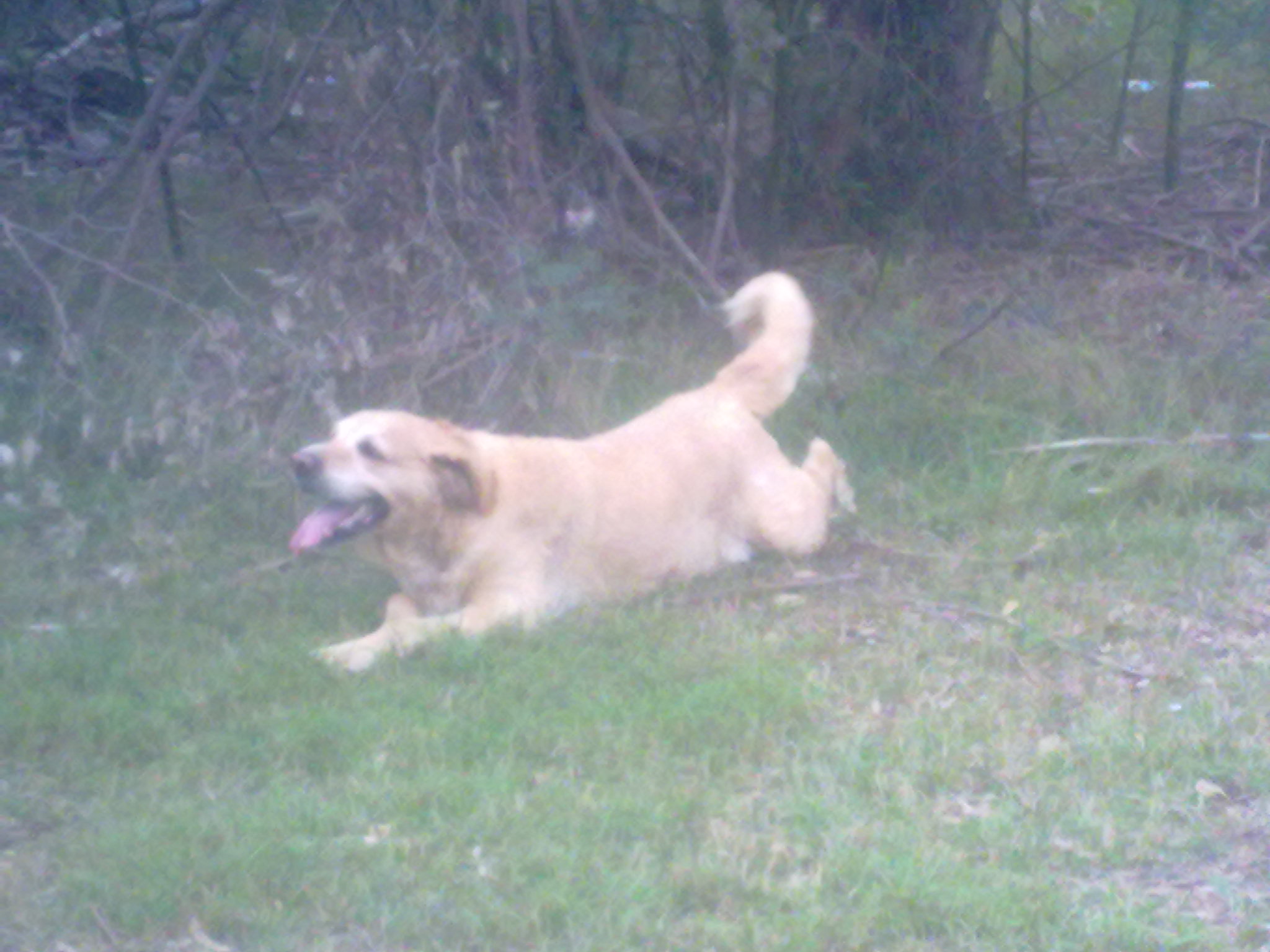 Biggles was diagnosed with Myelodysplasia Syndrome just after his 5th birthday.Born 10/03/2006. He had almost no white cells, no platelets and his red cell pcv was 20.After initial treatment with prednislone, after two weeks he was started on cyclosporine and ketoconazole. Over the next Five weeks his blood counts all improved and now he is still on both drugs and a daily antibiotic. He is fit and well and enjoying life